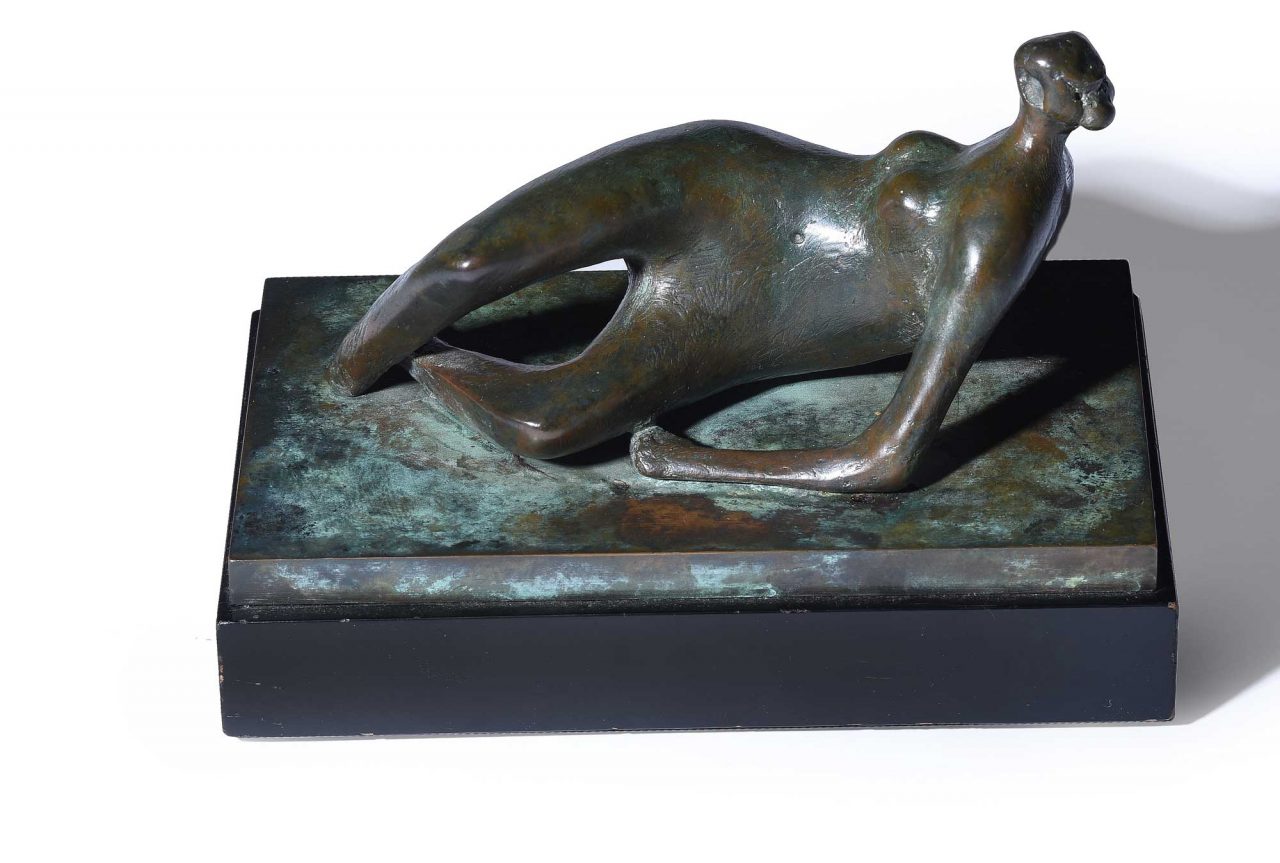 A bronze sculpture measuring just 11cm by one of the greatest British sculptors of the 20th century, Henry Moore (1898-1986), is set to come to auction at Dreweatts Modern and Contemporary Art sale on October 12th 2021.

The work titled Reclining Nude: Crossed Feet depicts a recumbent female nude – a form that dominated Moore’s artistic oeuvre throughout his career. He loved the composition both for the spirit of the idea, as well as the freedom of expression it afforded him. The work is typical of Moore’s small-scale bronzes. The smooth curves of the body dominate the form, whilst the more diminutive head, with its lack of naturalistic facial characteristics alludes to a generic stylised form rather than a personalised image.

Propped up on both arms, the body creates a contrasting mix of soft curves and sharper angles at the joints, interrupted by the lack of hands and feet. In spite of the simplification of the form, the work remains more naturalistic than his earlier abstract sculptures. The piece was created in 1980 and is estimated to fetch £60,000-£80,000 when it goes up for auction in Dreweatts Modern & Contemporary Art sale on October 12,2021. (See video of work here: https://youtu.be/KTedbvnD-zk)

Another significant work by Moore in the sale is Head of Queen (Study). The bronze is one of several preparatory works produced by Moore for the large-scale group sculpture King and Queen. Both the studies and the final sculpture are unusual within Moore’s repertoire, representing a defined subject rather than the usual universal human form. They are also the only sculptures depicting a single pair of adult figures in Moore’s entire repertoire. Moore himself offered up the following explanation, although others have suggested that the timing of the piece with the coronation of Elizabeth II cannot have failed to impress a certain interest upon the artist:

“The ‘King and Queen’ is rather strange. Like many of my sculptures, I can’t explain exactly how it evolved. Anything can start me off on a sculpture idea, and in this case it was playing with a small piece of modelling wax. … Whilst manipulating a piece of wax, it began to look like a horned, Pan-like, bearded head. Then it grew a crown and I recognised it immediately as the head of a king. I continued and gave it a body. When wax hardens, it is almost as strong as metal. I used this special strength to repeat in the body the aristocratic refinement I found in the head. Then I added a second figure to it and it became a ‘King and Queen’. I realised now that it was because I was reading stories to Mary, my six-year-old daughter, every night, and most of them were about kings and queens and princesses.”

This small study shows the angular head of the queen perforated by a single hole in place of the eyes, its thin face has been extensively worked and scratched adding texture and depth to the surface. The Queen’s head used in the completed group sculpture was much softer and less angular than his preparatory studies. In the present work, Moore’s working process is laid bare as he experiments with both the form and the surface. Each mark a permanent memory of the artist’s touch, the present work has its own beauty and serves as a key insight into the development of an idea. One of casts is held in the public collection of Montréal Museum of Fine Arts, Quebec, Canada, a gift of Dr and Mrs Max Stern in 1984. The plaster is held by the Henry Moore Foundation. This work was created in 1952 and cast in 1959 in an edition of two plus one artist’s proof. It is estimated to fetch £50,000-£80,000. See video of work here: https://youtu.be/GoN5Oul3vHU

Among other important British sculptors represented in the sale are several works by esteemed sculptor Lynn Chadwick (1914-2003). Walking Cloaked Figures VIII demonstrates Chadwick’s combination of timeless architectonic forms with elements of the human, animal and mechanical. From the 1960s Chadwick was experimenting with bronze casting and by the 1970s, he had established a visible vocabulary of sexual differentiation – triangle or diamond heads for female and square or rectangular heads for male. In addition, the technique of adding polished facets to his figures both added texture and accentuated specific parts of anatomy, as seen in Walking Cloaked Figures VIII. Created in bronze it was produced in 1980 and cast in a numbered edition of 9. It is estimated to fetch £40,000-£60,000.

The enduring quality and appeal of Chadwick’s work means that he remains a recognised household name. In 1964, he was awarded a CBE, and later in 1984 made Officer de l’Ordre des Arts et des Lettres in France. In 2001 he was appointed Senior Academician at the Royal Academy of Arts, London. His work is held in major collections and galleries around the world including the Tate Gallery, London, and Museum of Modern Art, New York. See video on this work here: https://youtu.be/FRe0_K7okY4

Elsewhere in the sale is a bronze figure titled Pilgrim by Dame Elisabeth Frink (1930-1993) a signature subject for this renowned sculptor, embodying the strength of the male form, alongside man’s heroism and fragility.

In 1984, Frink explained in her catalogue raisonné, ‘What I have tried to make clear in my sculptures for the last five years is the way in which feeling, expression, even force and energy, should be below the surface. The outer skin may define more or less conventional features, but with a second look should indicate the complex strain of nerve-endings and the anticipatory reflexes of something about to happen.’

Pilgrim encapsulates all of these things – a male standing firm, feet planted on the ground, yet frozen in step. Created in bronze in 1983 the work is estimated to fetch £15,000-£25,000. See video on the work here: https://youtu.be/bWhBzhQaT0E

Also in the sale is a bronze figure of former British Prime Minister Sir Winston Churchill (1874-1965), which is the smaller model of the one that stands in Parliament Square, London today. The figure was created by the British sculptor Ivor Roberts-Jones (1916-1996) who, on winning the commission went on to create the work that still stands proudly in the same spot.

In 1970 the Royal Fine Arts Commission (whose members included Henry Moore and John Piper), approached nine sculptors to compete for the Parliament Square Winston Churchill Monument commission. Two of these; Ivor Roberts-Jones and Oscar Nemon were shortlisted and invited to submit revised proposals. By November 1970, the Commission had selected Roberts-Jones as the sculptor. The finished statue was unveiled in Parliament Square in 1973 by Lady Churchill, with a speech given by Queen Elizabeth II.

The present figure was cast by the Meridian Foundry from a maquette produced at the same time as the Parliament Square monumental work and stands at 52cm. Roberts-Jones retained the first 100 casts for his own clients with the remainder being offered to the subscribers of The Collected works by Winston Churchill by the Library of Imperial History, London. The present work was purchased directly from Roberts-Jones by the present owner’s husband. It is estimated to fetch £60,000-£80,000.

To see the full catalogue online, or to find out more on other sculpture in the sale, click here.