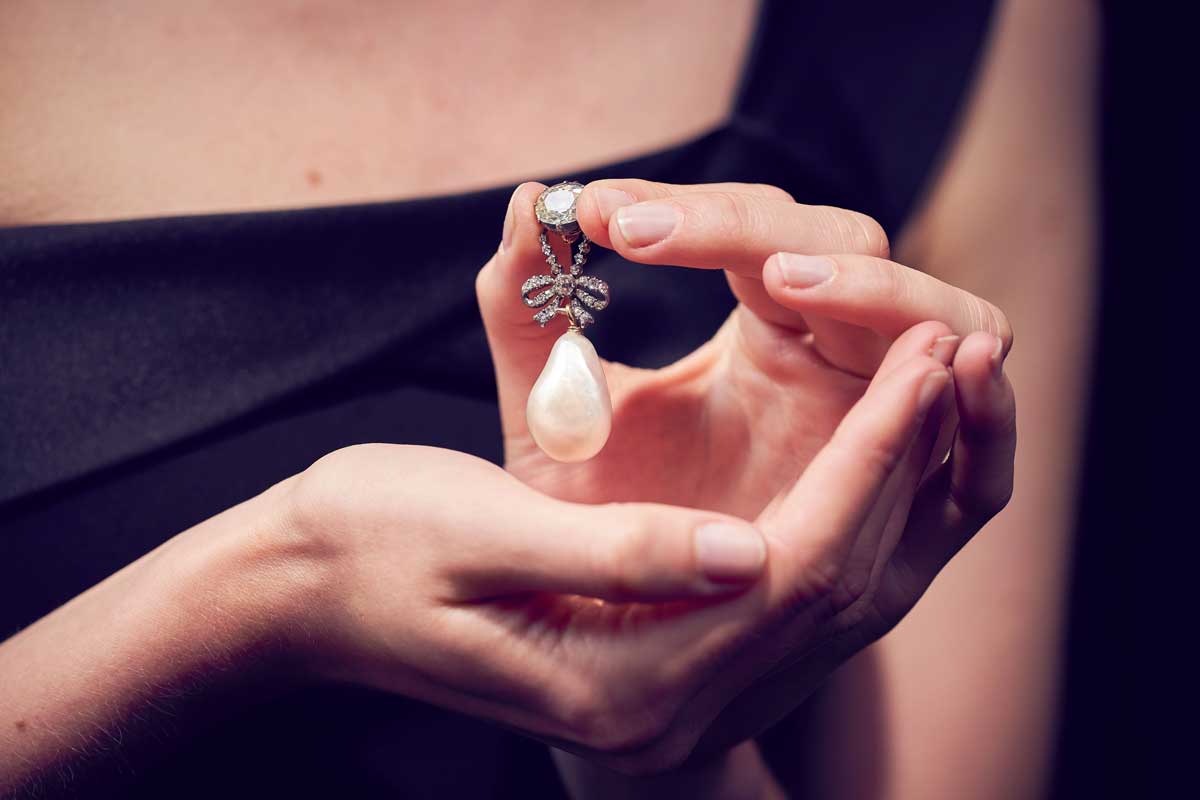 Unseen by the public for two centuries, Marie Antoinette’s diamonds and pearls went under Sotheby’s hammer as part of one of the most important royal jewellery collections ever to come to auction.

The auction took place in the Swiss city of Geneva on Thursday 15 November and, out of more than 100 lots, included 10 breathtaking treasures that belonged to the ill-fated Queen of France. The major collection—held by the Italian royal House of Bourbon-Parma and sold by Sotheby’s auction house—made auction history, realising CHF 53.5 million ($53.1 million).

With 100 percent of lots sold, this figure was more than seven times the high estimate of $7 million and a record for any sale of royal jewels—surpassing the long-held $50.3 million that was established by the 1987 sale of jewels belonging to the Duchess of Windsor.

The star lot of the auction, Marie Antoinette’s dazzling diamond pendant that supports a natural pearl of exceptional size (26mm x 18mm)—achieved $36,165,090. The pendant left its estimate of $1-2 million far behind, establishing a new auction record for a natural pearl and contributing to a total of $42.7 million for the Queen’s 10 exquisite pieces.

Perhaps the most intimate lot within the sale, a monogrammed diamond ring bearing the initials ‘MA’ and containing a lock of Marie Antoinette’s hair, eclipsed expectations to sell for 50 times the estimate of $8,000-10,000 at $443,786.

Daniela Mascetti, Sotheby’s Jewellery Chairman, Europe, said: ‘Tonight we saw the Marie Antoinette factor work its magic. No other queen is more famous for her love of jewels, and her personal treasures, pearls and diamonds that survived intact the tumults of history, captivated the interest of collectors around the world.’

Participants from 43 countries took part in the sale, featuring jewellery spanning centuries of European history, from the reign of Louise XVI to the fall of the Austro-Hungarian Empire. The Bourbon-Parma family is linked by blood to the most influential ruling families of Europe, a lineage that includes Kings of France and Spain, Emperors of Austria and Dukes of Parma. Evidenced by the opulence of the pieces in the collection, the Queen of Louise XVI was no stranger to a lifestyle and history that dripped with jewels.

In March 1791, King Louise XVI, Marie Antoinette and their children, began preparations to escape France. According to accounts written by the Queen’s lady in waiting, Marie Antoinette dedicated an entire evening in the Tuileries Palace to wrapping all her diamonds, rubies and pearls in cotton and enclosing them in a wooden chest.

In the following days, the jewels would be sent to Brussels, which was under the rule of the Queen’s sister and home to Count Mercy Argentau. The former Austrian Ambassador was one of the only men who had retained the Queen’s trust. He was to deliver the jewels and send them to Vienna to be safely kept by the Austrian Emperor, Marie Antoinette’s nephew.

In 1792, the family was imprisoned in the Temple Tower and Louis XVI and Marie-Antoinette were executed by guillotine the following year. The queen’s only surviving child, Marie-Thérèse de France was eventually sent to Vienna in 1796, where she was given her mother’s jewels.

With no children of her own, part of the collection was bequeathed to her niece and adopted daughter. In turn, Louise of France, the Duchess of Parma and granddaughter of Charles X, King of France, left them to her son Robert I—the last ruling Duke of Parma. They have been privately owned by relatives ever since.

Other sensational highlights from the auction were pieces from King Charles X, the Archdukes of Austria and the Dukes of Parma, and included a diamond tiara of foliate scroll design that was given to Archduchess Maria Anna of Austria for her wedding to Elias of Bourbon, Duke of Parma, in 1902. Created by the prestigious Viennese jewellery house, Köchert, and gifted by Emperor Franz Joseph, one of Europe’s longest reigning monarchs, the diadem sold for $967,990.

A diamond parure adorned with old-cut diamonds with a detachable pendant, that was made for Louise of France and included five diamonds that belonged to Marie Antoinette’s daughter, sold for $848,853. Diamond girandole earrings that once belonged to the Duchess of Parma reached $729,715, and a diamond ring set with a 2.44-carat orangey-pink diamond: $574,837.