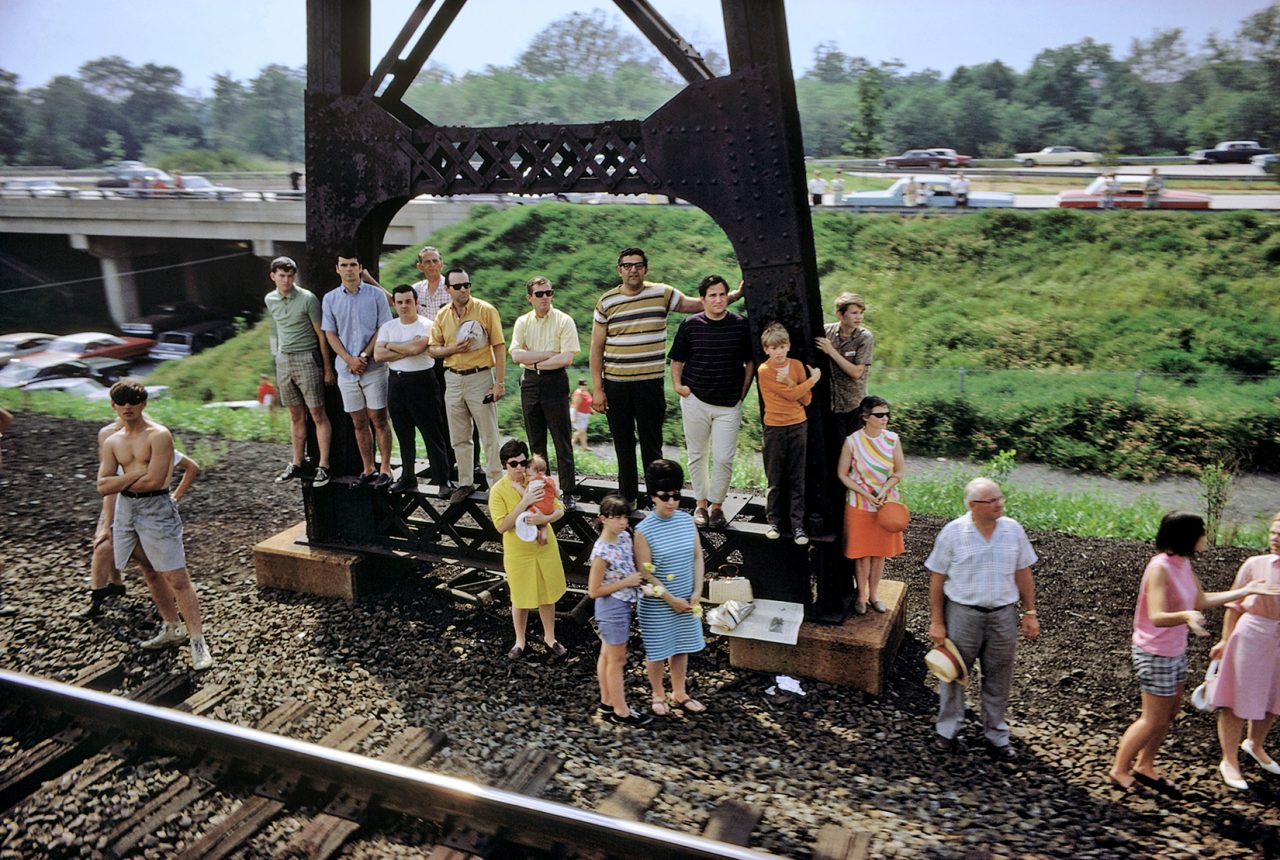 Celebrating the unpredictability of life, Magnum’s Square Print Sale explores the happy accidents and unusual turns of events that lead to memorable images. Signed or estate-stamped, museum-quality 6×6” prints by Magnum Photos photographers are available for $100 for one week only.

From its earliest days, photography has been associated with the unexpected: documentation of under-explored issues, reporting of events unfurling in far-flung locations, or single frames capturing split seconds of levity. Over more than seven decades, Magnum photographers have reported on and witnessed events around the world which changed societies, nations, and peoples in unpredictable ways.

Stuart Franklin’s image of an unarmed man stepping in front of a tank during the 1989 government crackdown on student protesters in Beijing’s Tiananmen Square was an “unexpected act of defiance”. Paul Fusco’s series of images taken from the moving train that bore RFK’s body across the United States (seen top of page: Paul Fusco, Magnum Photos: Robert Kennedy funeral train. USA. 1968) created a candid portrait of that nation’s inhabitants at a moment in American history. The work also saw him experimenting with the practical limits of his photography.

Raymond Depardon’s photograph of a youth sat astride the Berlin Wall on November 11, 1989 embodies the end of an historical era. Susan Meiselas, covering the 1979 Sandinista revolution in Nicaragua, photographed Pablo ‘Bareta’ Arauz launching a molotov cocktail at a National Guard HQ. This image became an unexpected symbol of revolution, which resonated with a generation and has been reproduced on t-shirts, matchbooks, murals and magazines across the world.

Some images are in themselves surreal, toying with the machinery of the medium or manipulating light and framing to create surprising abstractions. In René Burri’s image, wilting lotus flowers mirrored in Beijing’s Kunming Lake become abstract black scrawls more reminiscent of charcoal on paper than of a photograph. Colby Deal’s image of a silhouette seen through an erratically spray-painted window confuses the viewer. Fellow 2020 nominee Yael Martinez chose an image from his project Firefly, in which he pricked photographs with a pin to allow dots of light to intervene upon the images. Werner Bischof’s cascading snailshells recall the words of his famed tutor Hans Fisler: “Bischof’s endeavour is to isolate law and regularity from the apparent chaos of the accidental.”

Cristina de Middel’s image — from her series The Afronauts — experiments with recreating a little known historical space program, utilizing costume and staging to flex the limits of what ‘documentary’ photography can be.

Sometimes life simply throws up scenes of incongruity that a fast acting photographer needs only to record: elephants marching in front of the Eiffel Tower, a serpentine procession of tractors, a lone cloud seemingly mirrored as it floats over a bleached outcrop, or an outrageous expression on the face of an elderly passerby. Martin Parr’s image made in Pyongyang toys with the typical portrayals of stony-faced North Korean soldiers by capturing a paternal moment as one carries a small child. Olivia Arthur’s print, depicting well-wrapped skiers about to descend a pristine slope, was created in the arid heat of Dubai.

The stories behind the making of images can present unexpected elements. Famed subjects can surprise those assigned to photograph them. Dennis Stock recalled that Audrey Hepburn was “indifferent to her (or anyone else’s) celebrity”. Eve Arnold’s portrait of Marilyn Monroe depicts a side of the superstar alien to most: pensive, withdrawn, and down to earth. For Thomas Hoepker, the surprising aspect of his portrait of Muhammad Ali was that it existed at all: this shot of the fighter’s left fist was re-discovered in 2015 as the photographer delved into a vast collection of negatives.

This collection of 90+ prints is available for one week only in this format. It represents the breadth and variety not only of the practices and outlooks within Magnum’s membership, but also of what photography can convey and capture.

The Magnum Square Print Sale will take place on the Magnum Photos Shop: www.magnumphotos.com/shop. It will be open from Monday, March 22, 1AM PST to Sunday, March 28, 11:59 PM PST. During the sale, and one week only, over 90 archival-quality prints, signed by the photographers or estate-stamped by the estates, are available for just $100.

Magnum Square Prints are printed on 6×6” (15.24×15.24 cm) archival paper; image size is 5.5” (14 cm) on the longest side. Images will not be cropped but will instead have white borders. They are not editioned by quantity, but editioned by time, as these items will not be made available outside the sale window. The images in each sale are always different, and will never be available in this format again.

‘The Unexpected’ Magnum’s Square Print Sale, runs from Monday, March 22, 1AM PST to Sunday, March 28, 11:59 PM PST. Signed or estate-stamped, museum-quality, 6×6” prints from over 100 visual artists will exceptionally be available for $100, for 5 days only, from magnumphotos.com/shop.