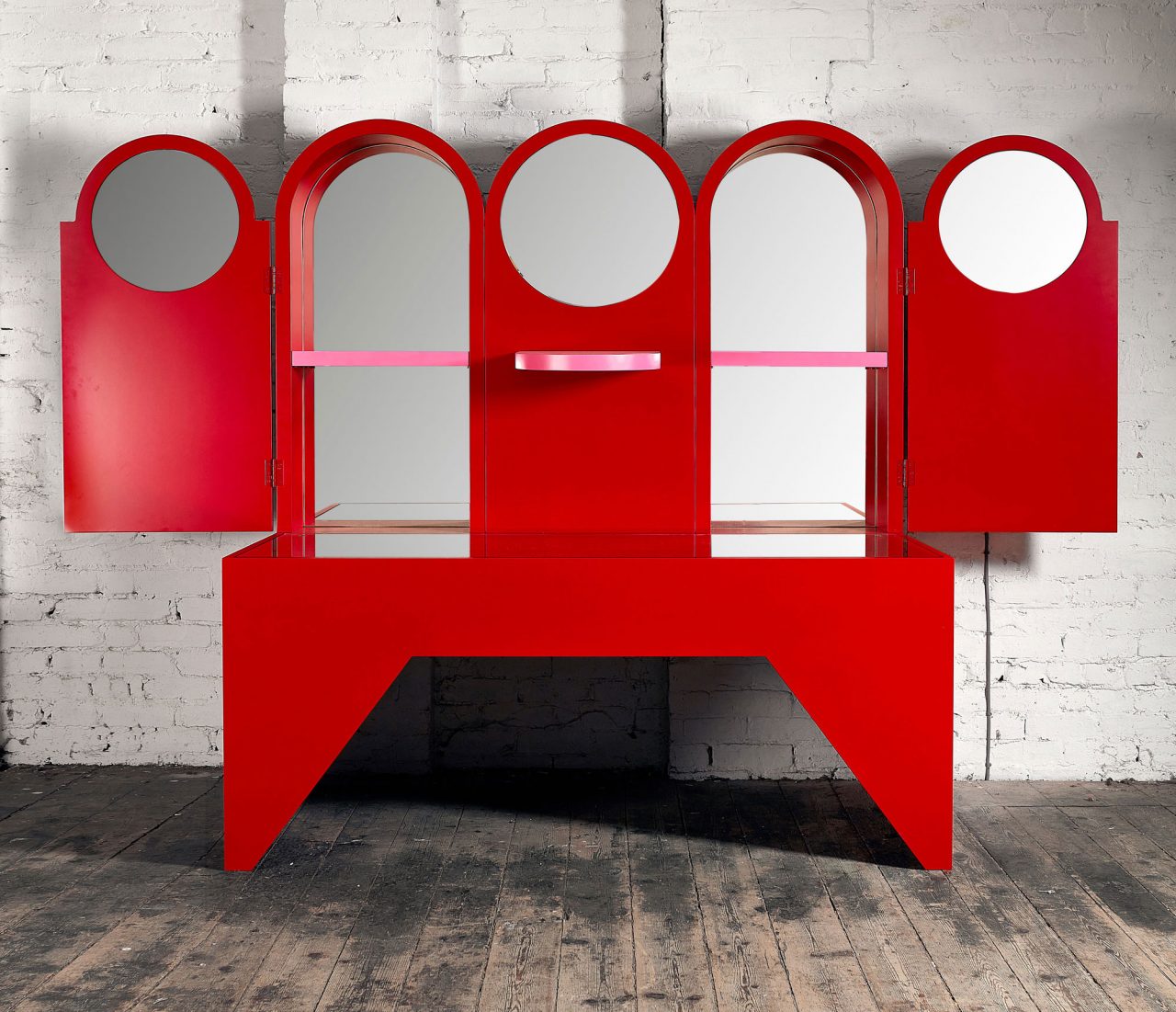 Celebrating the best of European design from pottery by Hans Coper to jewellery by Henning Koppel and furniture by John Makepeace, Lyon & Turnbull’s Modern Made auction on October 23rd brings to market important works from across the European design canon.

(All images courtesy of Lyon & Turnbull)

Works by Modern British artists are headlined by The Red Curtain, a key Camden Town school oil by William Ratcliffe (1870-1955). Dated to c.1916 (it was included in the Goupil Gallery show The London Group held that year) this oil shares close compositional similarities to The Artist’s Room, Letchworth in The Tate Gallery collection. Both works are thought to depict the Arts and Crafts style sitting room of 102 Wilbury Road in the new garden city of Letchworth – the home of fellow artist Stanley and Signe Parker. Ratcliffe and Parker (whose father was one of the architects of Letchworth) met while students at the Manchester School of Art. It has an guide of £20,000-30,000.

Another important work of the British avant-garde art scene of this period is a rare block printed silk and linen bedspread made to a design by Percy Wyndham Lewis (estimate £2000-3000). Dating from c.1914 it was probably made at the short-lived Rebel Art Centre – the offshoot of the Omega Workshops set up by Lewis after disagreements with the Bloomsbury set. The vibrant design of repeating animal motifs and bands of pastel colour, is known from a number of other similar pieces sold at auction in the past decade.

Sir Cedric Morris’ The Atlas Mountains, Morocco carries a guide of £8000-12,000. Each year Cedric Morris and his partner Arthur Lett-Haines closed the East Anglian School of Painting and Drawing they ran between October and March in order to travel abroad. The Atlas Mountains, Morocco was most likely painted either on one such winter trip away from Benton End, between 1918 and 1926.

View of the Harbour, La Rochelle is part of a small but important group of hugely accomplished oil sketches painted towards the end of his career by Sir William Nicholson (British 1872-1949). Nicholson and his companion, novelist Marguerite Steen, visited La Rochelle for the first time in August 1938, when the present work was painted from the high vantage point of a first-floor window apartment. It comes for sale with a full provenance (including its inclusion in Patricia Reed’s 2011 Catalogue Raisonné of the Oil Paintings of William Nicholson) with hopes of £20,000-30,000.

The quintessential St Ives school picture, the diminutive oil and pencil on board Black Sea & Demilune by John Wells (1907-2000), is expected to bring £8000-12,000. This abstraction of landscape forms pared down to a simple crescent and a sphere is signed, titled and dated 1973 to the reverse and further inscribed ‘Anchor Studio, Trewarveneth Street, Newlyn, W. Cornwall’.

In keeping with the ethos of the sale – curated to celebrate global 20th century artistic creativity across a range of mediums from paintings to studio ceramics and jewellery design – works by some of the biggest names in mid-century Italian furniture design lead the furniture. This strong selection of ‘Linea Italiana’ is headed by a mahogany, parchment and marble side cabinet designed by Osvaldo Borsani (1911-1985). Designed c.1940-45 it is contemporary with much of the furniture Borsani created for his own abode, the Villa Borsani in his native Varedo built to the principles of Rationalism. It comes for sale from a villa in Genoa with a guide of £8000-12,000.

An early design by Paolo Buffa (1903-1970), a rare wall mounted lattice shelf carries an estimate of £2500-3500. Made in walnut by Paolo Lietti & Figli, Cantù, the larger version of this model with three shelves was designed for and exhibited at the Esposizione di Monza of 1930. This example is sold with a certificate of authenticity from the Paolo Buffa archive, Gio Ponti (1891-79) is the towering figure from this period.

A mahogany sideboard with brass details c.1940 is attributed to the prominent architect and designer is pitched at £4000-6000 (other pieces from the same suite have appeared on the international market) while a walnut rocking chair designed c.1955 by the Cassina Technical Group of which Ponti was a part has the same guide.

Also from the post-war period, when Italian design embraced industrialisation and the avant-garde, is a table lamp designed by the French master glass worker and decorator Max Ingrand (1908-1969) during his decade-long directorship of Fontana Arte from 1954. Ingrand’s designs are still among the company’s best-selling products today. This original brass, glass and painted metal lamp c.1956 is expected to bring £4000-6000.

Two pieces made in the John Makepeace workshop in 1980 come to market with a note from the British furniture designer and maker himself. “I bought the tree of burr elm from Brackley Sawmills and they sawed it into ten 3in thick boards. It was remarkable for the consistency of the burr throughout the tree” he recalls. Among the pieces he made from the tree were a cabinet and stand (estimate £3000-5000) and a dining table (estimate £4000-6000). Makepeace continues: “Unlike most solid timber, burr elm is remarkably stable. The legs of the table could be joined directly into the table top. The combination of the simplicity of form and the extraordinary markings of the burr elm make this an especially valuable piece, made in my workshop at Parnham House, Dorset by Alan Amey.”

From the current generation of leading British cabinet makers is Heavenly Mansions, a display cabinet fashioned in plywood, MDF and mirrored glass by Charles Holland in 2019. Commissioned by Dovecot Studios for the Grayson Perry exhibition Julie Cope’s Grand Tour, it was designed by Holland as a cabinet of curiosities that could display sketches, maquettes and artefacts for the project dubbed A House of Essex and takes its title from a book by John Summerson, the first curator of the John Soane Museum. This one-off piece has an estimate of £4000-£7000.

Studio ceramics punctuate the catalogue from beginning to end. Works by all of the major practitioners of the burgeoning British studio movement are included from Michael Cardew and John Malby to William Staite Murray and John Ward. Dame Lucie Rie’s footed bowl with bands of pink and turquoise c.1979 has a guide of £5000-7000 while Hans Coper’s textbook Hourglass stoneware form c.1970 is expected to bring £8000-12,000. Both pieces come to auction for the first time: both were bought by the vendor’s family directly from the artists’ studios.

The sale includes an outstanding selection of post-war jewellery by Copenhagen firm Georg Jensen. Many are the instantly recognisable minimalistic and organic forms by Henning Koppel (1918-1981) who, after living in exile during the war, began working at Jensen in 1945. He took his inspiration from abstract art producing designs that were innovative, modern and ice cool. Three consecutive gold medals at the Milan Triennial in 1951, 1954, and 1957 were his reward. Among Koppel’s best-known jewellery designs is the Amoeba and Splash series first issued in 1953. Included in the sale are an Amoeba bracelet and necklace in silver guided at £1500-2000 and a Splash necklace in gold that has an estimate of £4000-6000. The latter, purchased by the vendors in 1971 directly from Georg Jensen, comes in its fitted blue silk box with a blue velvet interior.

During the post-war years, when the price of silver was high and demand fell for hollowares and cutlery, the company employed artists to develop new styles that kept it at the vanguard of modern jewellery design for a generation. Six pieces by Koppel are joined by others by Arno Malinowski, Ibe Dahlquist, Bent Gabrielsen and six pieces by Vivianna Torun Bülow-Hübe (1927-2004). Torun’s sculptural work became particularly important for the firm, with her bangle wristwatches with their distinctive polished quartz ‘domes’ becoming some of the bestsellers of the 1960s. Two are included in the sale carrying guides of £800-1200 and £600-800.

In British contemporary jewellery circles, the Sunderland-born designer Wendy Ramshaw (b.1939-2018) requires little by way of introduction. Largely self-taught, Ramshaw was first noticed in the 1960s when selling her colourful, flat-pack paper jewellery at Mary Quant’s London store Bazaar. Her ‘stacking rings’ displayed on novel upright posts were developed around 1965 and eventually won her the Design Council Award for Innovation in 1972. They now feature in over 70 public collections worldwide. Another of Ramshaw’s most recognised designs is the Orbits series of nickel alloy and black/white resin necklaces – the example here purchased from The Crafts Council Shop at the V&A in 1990 is pitched at £1200-1800 – while a rare neckpiece from 1982 made with gilt wire and blue and white jasper ware components supplied by the Wedgwood factory is £2,000-3,000. It was acquired directly from Wendy Ramshaw by the current vendor.

Lyon & Turnbull’s MODERN MADE auction will take place live online on October 23rd with viewing by appointment from October 20th-23rd at The Mall Galleries (The Mall, London, SW1).