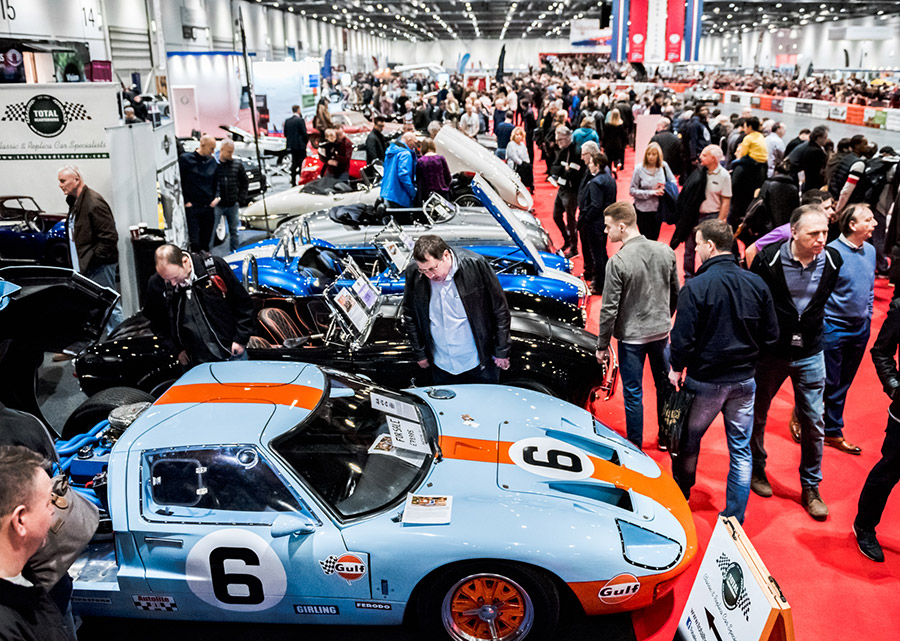 Over £70 million worth of cars will be for sale at The London Classic Car Show at Olympia from 20th-23rd February. Highlights include an Aston Martin DB4GT, a low mileage Ferrari 512 BBi and a  Maserati Ghibli 4.9 SS Spyder.

The weekend of 20-23 February 2020 will see over £70 million worth of classic cars from some of the world’s most prestigious marques all gathered under one roof at this year’s London Classic Car Show. Now in its sixth year, the event will showcase over 500 classic cars at its new home of Olympia London, with many available for purchase.
The annual gathering of the country’s most respected dealers, manufacturers and restorers will offer visitors the opportunity to purchase some unique and breathtaking classic cars, including:

A matching numbers, original Aston Martin DB4GT. One of just 75 cars produced, this DB4 GT was registered in April 1961 and has lightweight 18-gauge aluminium bodywork, Borrani 16” wire wheels, Girling brakes, twin fuel fillers, a boot mounted fuel tank and a spare wheel. Having emerged from long-term storage, it heads to Olympia London courtesy of Aston Engineering Ltd. and is expected to sell for around £2.2 million.

A 1959 Mercedes-Benz 300SL Roadster, the first of its kind to ever be sold and delivered to the UK, is also amongst the exceptional roster and will be available from Hemmels. It has an extremely low mileage, having covered just over 36,000 miles, and is expected to fetch in the region of £1.3 million.

An incredibly rare 1963 Aston Martin DB4 Series 5 Vantage in fast road configuration will be on offer. This immaculate model, presented in silver with red leather and red carpets, features the highly desirable flared in front headlamps and matching numbers Special Series engine (3x SUs) together with 15” wheels and longer body, which later developed into the DB5 model. It has been fully restored by Aston Engineering Ltd., including a rebuild of the 4.2-litre engine, uprated braking system, handling kit and addition of power steering, and has covered just under 2,000 miles since. Estimate: £460,000.

One of the finest examples of a Mercedes-Benz 190SL will be offered by Joe Macari Performance Cars. Around 70 per cent of the 190 SLs produced were delivered to the USA, but this 1960 model is in European specification and benefits from a full restoration. It is finished in ivory with red leather interior and is expected to fetch £125,000.

Over the weekend, The London Classic car Show will also host a two-day auction held by specialist auctioneers Coys. It will open bidding on 80 remarkable models on Saturday 22 February. The Coys auction collection includes:

A right-hand drive 1983 Ferrari 512 BBi that’s covered just 211 miles. First delivered in October 1983, the car was refinished in Nero black with Pelle Nera black interior at Maranello as specified by the original owners, a notable international royal family. Subsequently, it was kept as part of the owner’s collection and never been driven. In 2011, it was rebuilt by Ferrari and the car comes with full documentation of this along with original keys, handbook, tool roll, Classiche Red Book and original sales letter. Estimate: £400,000 – £500,000.

A 1970 Maserati Ghibli 4.9 SS Spyder, one of the finest and rarest in existence. Built to European specification and right-hand drive (one of just four in the world) this Spyder was produced for the 1970 London Motor Show in a striking Fly Yellow intended to catch the public’s imagination. Supervised by Carrozzeria Cremonini, no expense was spared in the well-documented restoration of this car back to its London Motor Show appearance and condition. Estimate: £800,000 – £900,000.

The Italian marque will also be represented by a 1970 Ferrari 246 GT ‘Dino’. Three series were built, with this Series ‘M’ example being part of a short run produced in early 1971 with five-bolt road wheels, an internal rear boot lid release catch, and seat-mounted headrests. First registered in Milan in 1971, it was lovingly restored in the 1990s with an engine rebuild and retrim to the interior. It’s being offered from a Belgian collector with a comprehensive photographic record of the restoration and a letter from Ferrari confirming its standout original colour scheme as finished today – Giallo yellow with a black interior. Estimate: £200,000 – £300,000.

An exceptionally rare 2010 Wiesmann MF5 V10 Roadster will also be available. Although 55 MG5 roadsters were produced, most were fitted with a V8, with the factory suggesting that this beautifully presented model is likely to be one of as few as ten roadsters with a V10, sourced from an M5, with only two of those delivered to the UK. Estimate: £200,000 – £225,000.

Up for auction will be a 1965 Lancia Flaminia 3C GTL that combines Lancia’s quirky and interesting engineering with stunning Pininfarina-designed Superleggera body, which set the stylistic benchmark of the era. This 2+2 seater, 2.8-litre GT is one of only 300 of its type produced and comes rebuilt and refurbished. Estimate: £80,000 – £90,000.

Another highlight from the 80-strong lot list is a stunning Bentley 3.5-Litre Sports Saloon from 1934 that has been with the same family from new. Offered for the first time on the market, this ‘Silent Sports Car’ – as it was dubbed at the time – comes in its original condition with a wonderful patina. Estimate: £40,000 – £50,000.

“The show is set to be a classic car buyer’s paradise with remarkably rare and sought-after machines headed to Olympia that are sure to make outstanding additions to the most notable of collections,” says Bas Bungish, The London Classic Car Show Event Director. “We will have a vast range of marques and models on offer, everything from the incredible through to more affordable models for those looking to make their first investment and start a collection.”

The 2020 London Classic Car Show will take place on 20-23 February 2020 at Olympia London.
Advance tickets for the London Classic Car Show start from £25 per adult, £20 per child (6-16) and £75 per family (two adults, two children). Entry for children under the age of six years is free. Tickets for Thursday’s Preview Evening, where an industry personality will be honoured with the show’s coveted Icon Award, start at £75. Premium tickets are available for Friday, Saturday and Sunday, starting at £60 per adult, which include fast track entry, hospitality and show guide, as well as the chance to meet and participate in a private Q&A with Car Legends in the VIP area.

For more information and to book tickets visit www.thelondonclassiccarshow.co.uk.