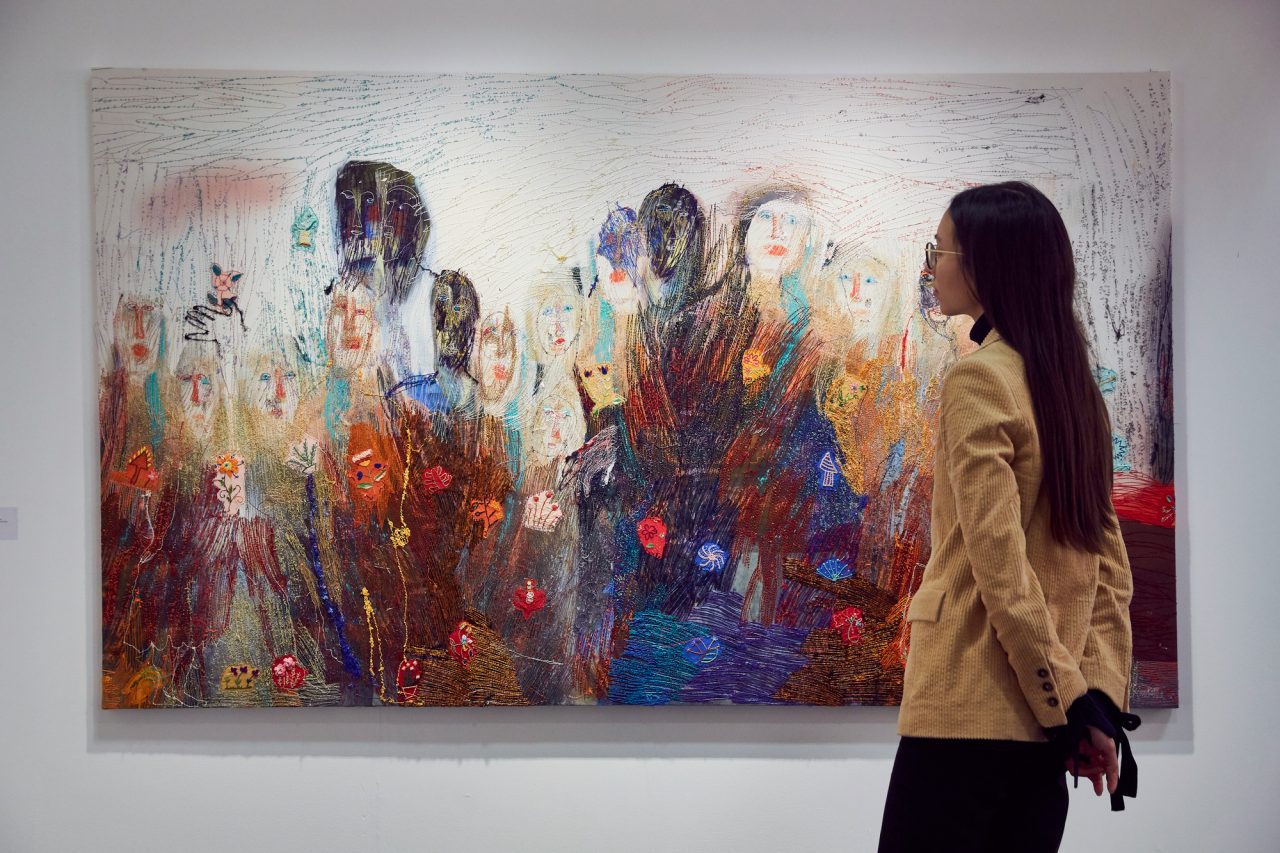 London Art Fair 2020 at the Business Design Centre in Islington concluded its 32nd edition on Sunday 26 January, reporting robust sales and an overall attendance of 23,000 visitors. Confidence in both modern and contemporary art was evident as the Fair opened with a Preview Evening on Tuesday 21 January, where collectors, institutions and art enthusiasts enjoyed a first look at presentations by 129 galleries from 14 different countries.

Sarah Monk, Director of London Art Fair, said: “ As we enter a new decade, London Art Fair endeavours to continue reflecting the art market in all its breadth, from established and more traditional mediums to new areas of growth, such as the surge in interest in textile art. We celebrate our heritage through initiatives such as our annual Museum Partnership, whilst also embracing change and disruption through our curated sections which feed our visitors’ and collectors’ appetite for discovery.”

London Art Fair welcomed many returning galleries alongside new exhibitors from the UK, Europe, Israel, Japan, Singapore and Canada, who enjoyed strong sales across the Fair and specially curated sections. London Art Fair prides itself in nurturing collecting at all levels, welcoming both established and emerging artists to the Fair.

Confidence in the contemporary art market was evident with collectors acquiring emerging artists, including strong sales of Judith Berry and Jessica Quinn by first-time Art Projects exhibitors Art Mûr and Kittoe Contemporary, reflecting the continued interest in contemporary painting . Meanwhile, four paintings by artist Christopher Hanlon, priced between £5,000-£7,000, were sold to a notable collector by Domobaal.

Drawings by the Spanish artist Guillermo Martin Bermejo sold out at James Freeman Gallery, whilst two of David Theobald’s digital works on display in the Screening Room were purchased from a limited edition series of six.

Galleries specialising in Modern British art, which has long been a key component of the Fair, also reported healthy sales. Ten enigmatic canvases by Pat Douthwaite were sold for between £7,500- £15,000 each from The Scottish Gallery’s striking presentation of the outsider artist. The Nine British Art sold a cast bronze sculpture and the painting Levant (Cornwall) by Leigh Davis; Crane Kalman Gallery reported strong sales exceeding £100,000; and Beaux Arts sold multiple paintings by David Bomberg, with prices reaching up to £60,000.

The curated section, Platform, continued to perform well in its second year, with Candida Stevens’ solo presentation of Alice Kettle selling all twelve works by the artist with prices up to £24,000. Oxford Ceramics Gallery sold all four of their wall-hangings by the pre-eminent British weaver Peter Collingwood, created on the artist’s own handbuilt loom, priced at £6,000-£10,000 each. Textile art was also popular across the Fair as a whole, with Raw Editions selling Grayson Perry’s Marriage Flag for £7,000. Candida Stevens said: “The reception of Threading Forms has been phenomenal. The position of textile art within the wider context of the art market has grown exponentially in recent years and I am delighted that this has been reflected in strong sales at the Fair. While each of the galleries participating in Platform has brought something unique, together the section has become more than the sum of its parts. I hope that visitors who were not previously familiar with the medium will be inspired to explore textiles long after they leave the Fair.”

Photography continues to be a popular medium at London Art Fair. Peckham-based newcomers ECAD Gallery sold work by all three photographers on their stand – Olga Karlovac, David Magee and Eurivaldo Bezerra – working exclusively in black and white. Meanwhile, The Contemporary London sold eleven prints by Suzanne Moxhay presenting a timely look at the boundaries between nature and man-made objects.

Visitors’ interest in topical environmental issues was also evidenced by multiple sales of a portrait of climate activist Greta Thunberg from James Freeman Gallery. Elsewhere, the Fair’s annual Photo50 exhibition, which explored the vast pool of talented living female photographers aged over 50, sold six works by artists Sandra Jordan and Kim Shaw. Occupy the Void, curated by gallerist and writer Laura Noble, provided a forum to investigate the cultural ‘space’ inhabited by women, who make up 80 percent of photography students but only 15 percent of the professional industry.

Laura Noble said: “The response to this talented group of female artists, both established and in the early stages of their careers, has been fantastic. In each of their own personal ways, these women have ignited a conversation about how we take up space in all its different guises. I hope that visitors to the fair have gone away with more of an insight into the unique perspectives of these artists and appreciate the action taken together to address this imbalance within the art world and in society more generally.”

Clare Mitchell, Curator of Art at Southampton City Art Gallery, said: “It has been a pleasure to share a platform with other galleries and make connections between their artworks and our own. We are very grateful to London Art Fair for affording us the opportunity to share some of our art with the capital and we invite visitors to the fair to see more of our collection at its home in Southampton.”

An extensive talks programme took place throughout the Fair with curators, gallerists, artists and other leading figures within the arts industry joining panels exploring art as therapy, code-based art and multi-authored photography, as well as identifying collecting trends for the home and museum. During the Fair’s popular Thursday Late, artist Samantha Humphreys staged an interactive performance responding to the Screening Room’s look at the boundaries between work and play, creating bespoke woodblock artworks for visitors based on their smartphone displays.

See also: Noel Fielding to be Special Guest Artist at The Other Art Fair in March