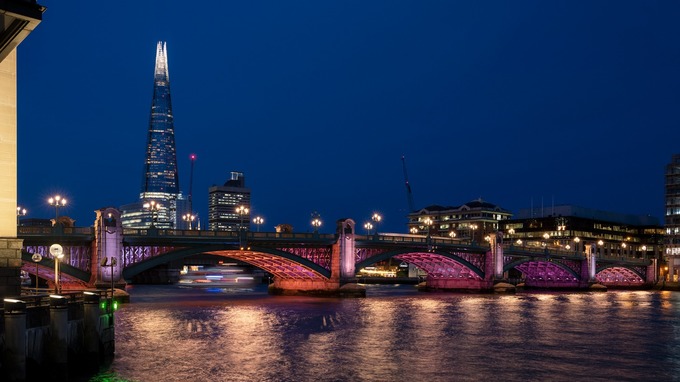 You might have already seen the fluorescent lights across London and wondered what they are. For those of you haven’t, Leo Villareal’s art installation of LED lights, produced with the help of architect, Lifschutz Davidson Sandiland is visible across all major bridges paralleling the Thames river in central London. The lights can be found at London Bridge, Cannon Street Bridge, Southwark Bridge and the Millennium Footbridge—another 11 bridges will follow suit over the course of the next year. The neon lights will cover nearly 50 percent of the bridges in central London, which is home to a total of 33 bridges, and will span across 8km of the River Thames.

The Illuminated River Foundation believes the project will symbolise “a beacon of London’s creativity, ambition and spirit”, which will leave “a lasting legacy” in the shape of public artwork that commends and celebrates the Thames bridges as momentous architectural landscapes enriched in England’s social and cultural history.

As early as the medieval period, the river Thames served as a major trade and transport route, and spanning 346km or 215 miles, it is England’s longest river.

The river’s historical significance was highlighted by Hannah Rothschild, Trustee of the Illuminated River Foundation. She observed, “Since the founding of London, the mighty Thames has been the city’s main artery, linking north and south, east and west, encouraging business, activity and recreation. But at night, the river becomes a ribbon of darkness, a place that few can enjoy.”

The project will capitalise on Leo Villareal’s artistic talents of being able to ‘paint with light’ and architectural practice, Lifschutz Davidson Sandilands’ bridge-building experience to restore the river Thames to its former brilliance in a mere a flick of a switch.

In addition to receiving financial backing from philanthropists such as Lisbet Rausing and Peter Baldwin through the Arcadia Fund and £5 million from The Rothschild Foundation, the project has earned a seal of approval by the Sadiq Khan. The Mayor of London stated, “The Illuminated River will give London free art. The project also means that a wasted asset and wasted resource will now be used. The team had thought through how the project is sustainable, how it will be energy efficient and use less energy.”

What an absolute treat to see the first phase of Illuminated River last night, courtesy of City Cruises who took us up and down the Thames to check it out. Four bridges have been lit up in a collaboration between artist Leo Villarreal & architects Lifschutz Davidson Sandilands. The plan is to light up more of the bridges in future so this great project will get bigger. Thankfully I had my phone's (Google Pixel 3) night sight mode which meant I was able to get some great photos of it.

Leo Villareal: The Man Behind the Neon Lights

Leo Villareal, the man behind London’s neon lights and the world’s longest artwork, was born in New Mexico, 1967. He pursued art at university with a Bachelor of Arts in sculpture, before venturing out to New York University to commit himself to a graduate program in Interactive Telecommunications Program (ITP). After the successful completion of the graduate program, Leo Villareal joined the late Microsoft co-founder, Paul Allen’s cooperation, Interval Research.

He cites the inspiration behind the debut of his largest artwork in 2013, The Bay Lights, to have stemmed from the time spent with the billionaire. Created to commemorate the 75th anniversary of the San-Francisco-Oakland Bay Bridge, commonly known as the Bay Bridge, The Bay Lights comprises of over 20,000 individual white LED’s that are visible from the north side of the bridge. Despite the art display at Bay Bridge originally being installed as a temporary piece of art work, in celebration of the bridge’s anniversary, it was later reinstalled to become a permanent addition to Bay Bridge.

Contrastingly, the lights installed as part of the “Illuminated River Project” are expected to remain for the next 10 years, yet depending on the public response to them, Leo Villareal’s Illuminated River may become a permanent fixture in the foreseeable future.