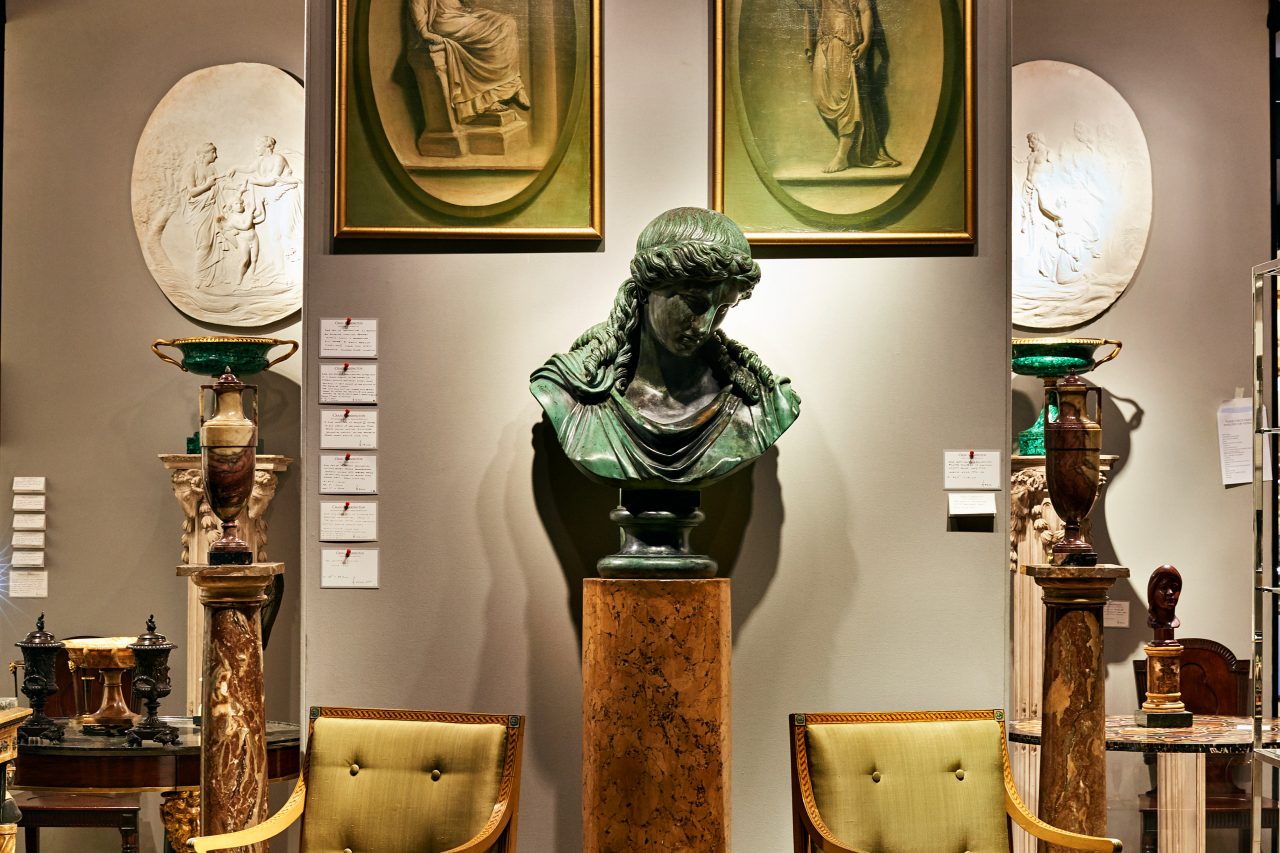 LAPADA, the world’s largest association of art and antiques dealers, celebrates its 45th anniversary this year—it certainly doesn’t look its age, with its annual Art & Antiques Fair coming up in London’s exclusive Berkeley Square in September, and a vigorous program of conferences and lobbying between its teeth.

The LAPADA symbol of the golden chandelier remains the mark of an experienced, knowledgeable, trustworthy dealer, backed by a strong advisory, mediation and lobbying association.

With a background in art dealing, gallery management and PR, Freya Simms worked for Christie’s Fine Art, Bonhams and Sotheby’s before becoming Director of the Olympia Art Fair. Now CEO of LAPADA, representing over 500 professional art and antiques dealers in the UK and overseas, she faces some difficult issues, such as the uncertainties of Brexit, the upcoming ivory ban and competition from sometimes dubious online dealers.

So, we asked how the art and antiques market was looking, with the annual Masterpiece show just over and London Art Week in full swing. “Well, it has been busy!” Freya says: “There have been a lot of people there, both exhibitors and visitors, and most seem happy. The fact is that not every dealer can do brilliantly at every show, and not in every market—for instance sculpture is a strong market, but a slow one. If you are looking to buy in order to make a profit, you have to be patient.”

Part of the problem facing LAPADA members, we suggest, may be uncertainty over Brexit—not only are customers reluctant to buy, but dealers feel frustrated by lack of definitive information. “That’s certainly true,” says Freya: “For instance we have been lobbying about the ivory ban for some time, as some of the details are draconian—you have situations where a Georgian teapot with just an ivory handle may be banned from sale. At the moment it’s a mess.

“With Brexit, larger businesses with their own import/export departments may cope with the red tape, but something like 70 percent of LAPADA members are small operations. We can give help and advice through our members’ website.

“Our continental contacts may see everything as being in stasis, but it’s not all doom and gloom here—maybe some hesitancy in London, but in the regions things are certainly looking up.”

There should be plenty to be happy about at the highly anticipated LAPADA Art & Antiques Fair in September, a collector’s paradise housed in a specially built pavilion in Berkeley Square. As Fair Manager Sophie Wood tells us, 20,000 visitors are expected to visit to see a diverse collection of fine art, jewellery, textiles, silver, furniture and objets d’art, all vetted by experts, from around 100 of LAPADA’s leading art and antiques dealers.

The venue is exciting enough, with Berkeley Square’s ancient plane trees growing inside the complex of marquees and a restaurant magically suspended at a higher level, but there’s more than usual to celebrate in this 10th year at this exclusive location.

“In celebration of this anniversary year, exhibitors will present pieces by a nominated LAPADA Legend—the brilliant historical craftsmen whose vision and talent has ensured their work has endured for centuries” says Sophie. “From Chippendale and Wedgwood, Dame Lucie Rie and Georg Jenson, Suzanne Belperron and Paul de Lamerie, works by these prodigious talents will be available to view and to buy.”

The design talent theme extends to charity beneficiary Sarabande, the charitable Foundation established by Lee Alexander McQueen, which will host a spectacular gala on Monday, 16 September to raise funds to support future artists.

So where should visitors to the LAPADA Fair spend their money, we asked, what are the sure-fire investments for budding art and antiques dealers? “We don’t need any of these things,” says Freya, “So you have to buy what you love! Don’t be afraid to mix and match styles and eras, and after a while be prepared to sell some pieces so you can upgrade to something better. I see a lot of antique furniture which is out of fashion with the older generation, but younger people are snapping it up because it shows craftsmanship, and it’s sustainable.”

Sophie adds: “You’ll see loads of surprising things at the LAPADA Fair, including a box made from fragments of the barrel used to preserve Nelson’s corpse, and bronzes, paintings, jewellery, textiles, silver, furniture and objets d’art of all sorts from £500 to £500,000. The key I think is to mix the contemporary with the antique—support younger craftsmen as well as traditional collectables.”

Tickets for the LAPADA Art & Antiques Fair cost £20 and can be purchased online or on the door from the event box office.