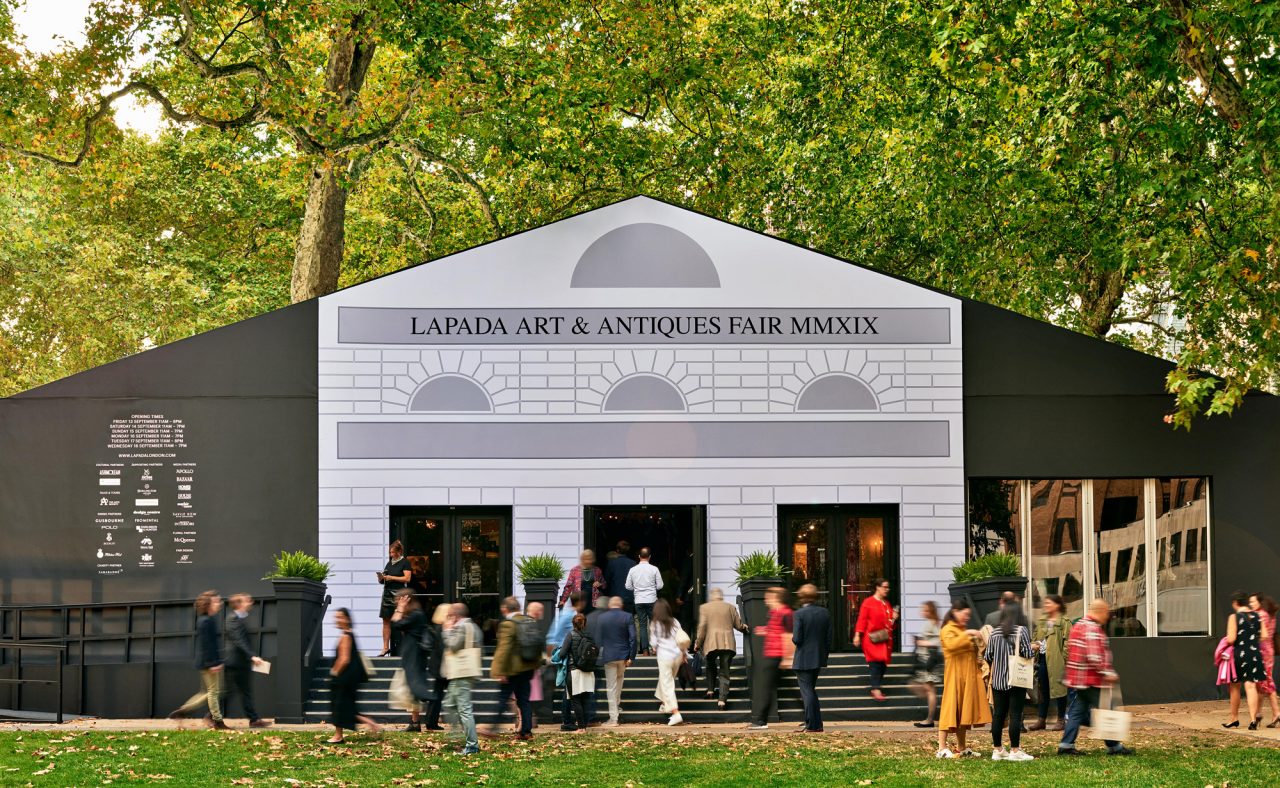 LAPADA closed the doors on its 2019 Fair in London’s Berkeley Square on September 18th with indications that the art and antiques trades are outperforming retail sales projections. Earlier in the year the Office for National Statistics (ONS) cited significant growth in the antiques and vintage markets and, alongside trends for craftsmanship and sustainability, there are positive signs the art and antiques trades are performing well.

The bustling fair welcomed visitors across the week to its specially constructed two-floor marquee. Among the high-profile visitors spotted were Florence Welch of Florence and the Machine, who was spotted on J Rodger Antiques stand. Also seen perusing the aisles were designer Sophie Conran, luxury property developer Nick Candy and actresses Amanda Strang and Sheila Hancock.

Exhibitors reported a number of good sales. Wick Antiques and The Parker Gallery in particular had an outstanding fair, selling 19 and 10 pieces respectively. New LAPADA member and 20th century specialist, Freya Mitton also reported good sales. With London Fashion Week in the news 3Details sold a collection of 17 Yves Saint Laurent sketches for £45,000 along with a 19th century French walnut mirror from the late designer’s home and six original photographs by Karl Lagerfeld.

Amongst other sales highlights were:

• I Franks had its best opening day in a decade of exhibiting at the fair selling a magnificent Victorian silver plate centrepiece featuring a stag, a doe, a giraffe and an ostrich.
• Pear Tree Collection sold an important set of Gilbert Marks plates for circa £42,000
• South Africa based The Old Corkscrew sold a ‘Portrait of a Lady’ attributed to Thomas Hudson or Allen Ramsey circa 1740 for the asking price of £38,000 and a variety of silver pieces.
• Lennox Cato sold several pieces including a satinwood secretaire bookcase, a rare decanter on a stand and an Anglo-Indian box.
• S&S Timms sold a pair of Georgian night tables to a private collector.
• Butchoff Antiques sold a pair of mirrors and a pair of wall lights, both 19th century.
• Willow Gallery sold two major paintings, one for a high six figure sum.
• Horton London and Wimpole both sold important jewels by Bulgari.
• Spicer Warin reported sales of several diamond bracelets.

See also: Galleries and Auction Houses to Re-Open from June?

LAPADA Legends was a new initiative created to mark the 45th anniversary of LAPADA and to recognise the contribution of artists and craftsmen whose achievement and legacy have meant their work has endured for centuries. The exhibition, curated by Helen Linfield of Wakelin & Linfield, featured pieces chosen by a committee of experts and tastemakers, of which a Folio Cabinet by Gillows of Lancaster sold for an undisclosed sum along with an important Okimone carving provided by Japanese specialist Steve Sly and a pair of large bronze Meiki Period (1868 – 1912) cranes .

Stardust was sprinkled by the fair’s beneficiary charity, Sarabande – The Lee Alexander McQueen Foundation, whose glamorous Craftsmen’s Dinner by chef Mark Hix, attracted guests including Eddie Redmayne, Kelly Hoppen, the New York Costume Institute’s Andrew Bolton, designers Sarah Burton, Stephen Jones and Nicholas Kirkwood and event host, Aimee Mullins, who was joined by her actor husband, Rupert Friend. Over £200,000 was raised for the charity, which supports visionary creative talent in the early stages of their careers.

LAPADA Fair Manager, Sophie Wood, commented, “Against an extraordinary political and economic backdrop we have been delighted that so many of our exhibitors have reported good business. A growth in box office ticket sales affirms our focus on marketing and innovative partnerships with the likes of Fromental and Burlington Arcade. In particular, we have seen more interior designers engage with our exhibitors and we are pleased that our efforts to attract new, affluent audiences to the fair have paid off.”

Freya Simms, LAPADA’s CEO, added, “This fair is one of the highlights of the LAPADA calendar, bringing together an eclectic mix of disciplines under one roof. It’s a privilege to offer our members a week long sales platform in a prime Mayfair location such as Berkeley Square. As the trading environment evolves and growing numbers of dealers eschew the traditional retail setting, the opportunities offered by LAPADA as a member-owned and run body grow in importance.”

Photofairs in Shanghai to Open With Examples of 50 Leading Galleries