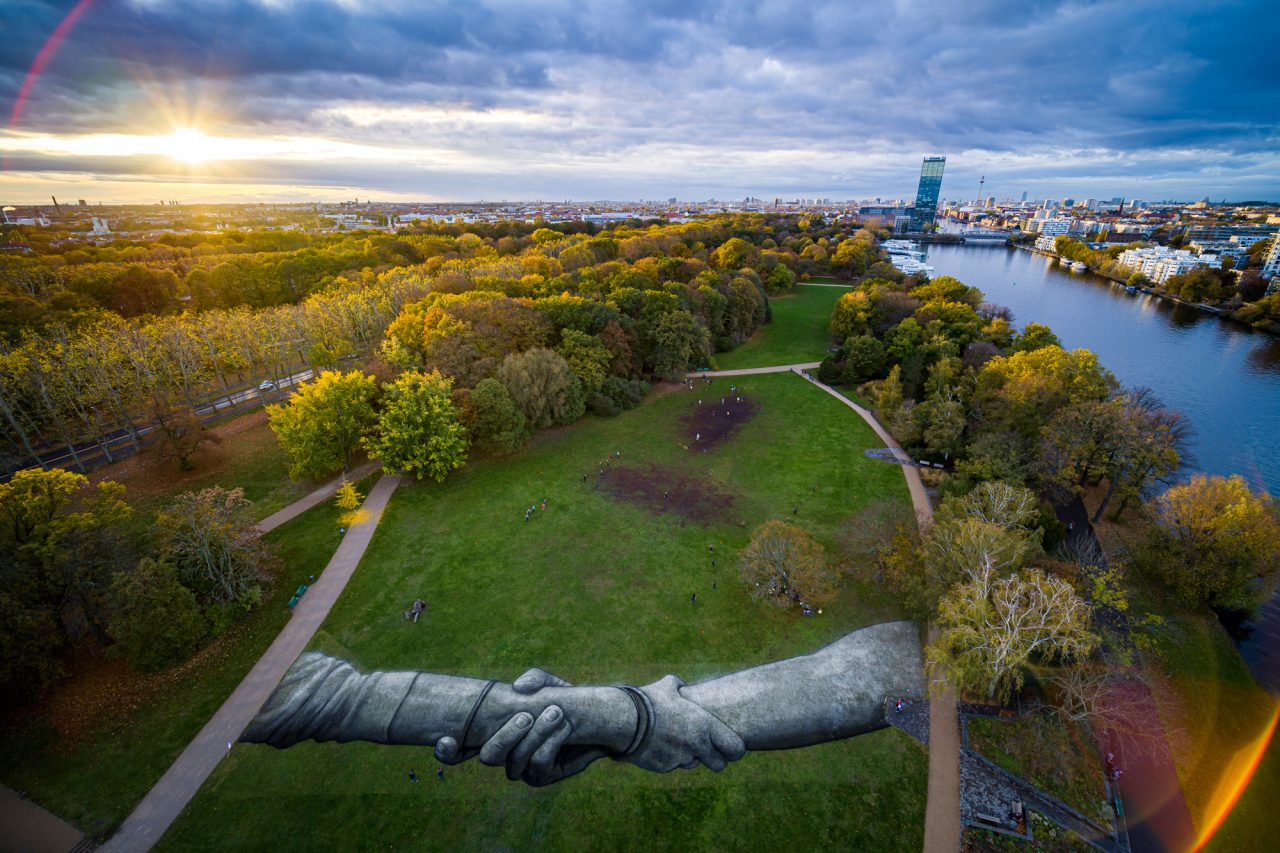 Two remarkable frescos, each more than 2,000 square meters, were unveiled by the MTArt Agency artist, Saype on 5th November in Berlin’s Treptower Park and Wachturm Schlesischer Busch to commemorate the 30th anniversary of the fall of the Berlin Wall.

The massive land artworks will mark the fourth of 20 Saype is completing for his international series Beyond Walls. The project launched in June 2019 on the Champ de Mars, Paris with a 600-metre-long painting under the Eiffel Tower. The artwork depicts a chain of grasping hands, a powerful symbol of human exchange in support of common human rights and a sign of hope and peace for the future.

For the 30th anniversary of the fall of the Berlin Wall, Saype’s Beyond Walls project brings a strong image of commonality among different people and unification within the world. The extension of the human hand chain in Treptower Park and Wachturm Schlesischer Busch where the Berlin Wall once passed took Saype and his team of two assistants over one week to complete. They used 200 litres of Saype’s own biodegradable paint formula, which he creates with natural pigments from the surrounding area he works in.

This project is supported by the Mayor of Treptow-Köpenick and the Senate Department for Culture and Europe. Alongside them, MTArt Agency, the first agency for visual artists worldwide, represents French artist Saype and provides him with investment and support for his work. Saype is part of a new generation of artists who are moving away from the traditional gallery model and working on public art projects with the help of MTArt Agency.

Saype has been painting giant biodegradable frescoes since 2013 and has been recognised as a pioneer of a new Land Art movement promoting social values. Last year, Forbes named him on their 30 Under 30 list as one of the most influential artists of his generation and videos of his work have been viewed more than 150 million times.

Trained as a medic, Saype supports the charity, SOS Méditerranée, and Beyond Walls is based on 2,000 photographs of human hands he took during its 2019 gala. Last year, he painted a giant fresco in Geneva to raise awareness of the organisation.

On the Berlin project of the series, Saype says:

“I am proud to have Beyond Walls part of the commemoration of the 30th anniversary of the fall of the Berlin Wall. The year 1989 marks both the year the wall fell and my birth year, so it is very special to me to contribute art to this historical event which depicts a human hand holding chain and offers a symbol of togetherness and realization that walls, both physical and mental can be overcome.”

“Saype’s work continues to inspire and make a profound impact on public spaces. MTArt Agency is excited to support him as he brings the messages of community and care for humankind all over the globe, especially on this important historical anniversary. Saype’s work is a reminder that art is powerful and should be accessible to everyone, rather than confined to galleries and museums.”

The Beyond Walls project is supported by B Corp, a global movement driven by companies wanting to reconcile profit and purpose and ensure a positive impact on society and the planet.

Marine Tanguy has been shortlisted in the Demeter category in the 2019 NatWest Everywoman Awards – a platform for celebrating the successes of female entrepreneurs – which spotlights inspirational women running a business trading from 3 to 5 years.

Marine has spent her whole career working in the art industry, and at just 23, was approached by an investor her to open her first art gallery in Los Angeles.

While Marine was in LA, she met people from the top talent agencies and felt it was a more well-rounded way to manage talent. She decided to build her own agency for artists – the first of its kind – using the same principles as a talent agency. The idea was to work commercially with the likes of brand partnerships in order to grow, pay, and support artists better. Socially, these partnerships have enabled her to widen the demographics of who her artists reach and inspire.

She persevered with her business and in 2018 was rewarded with a Forbes 30 under 30 Europe, Art & Culture recognition. The agency has since grown organically and currently invests in 15 artists selected for their talent and socially engaging concepts, supporting them financially and strategically.