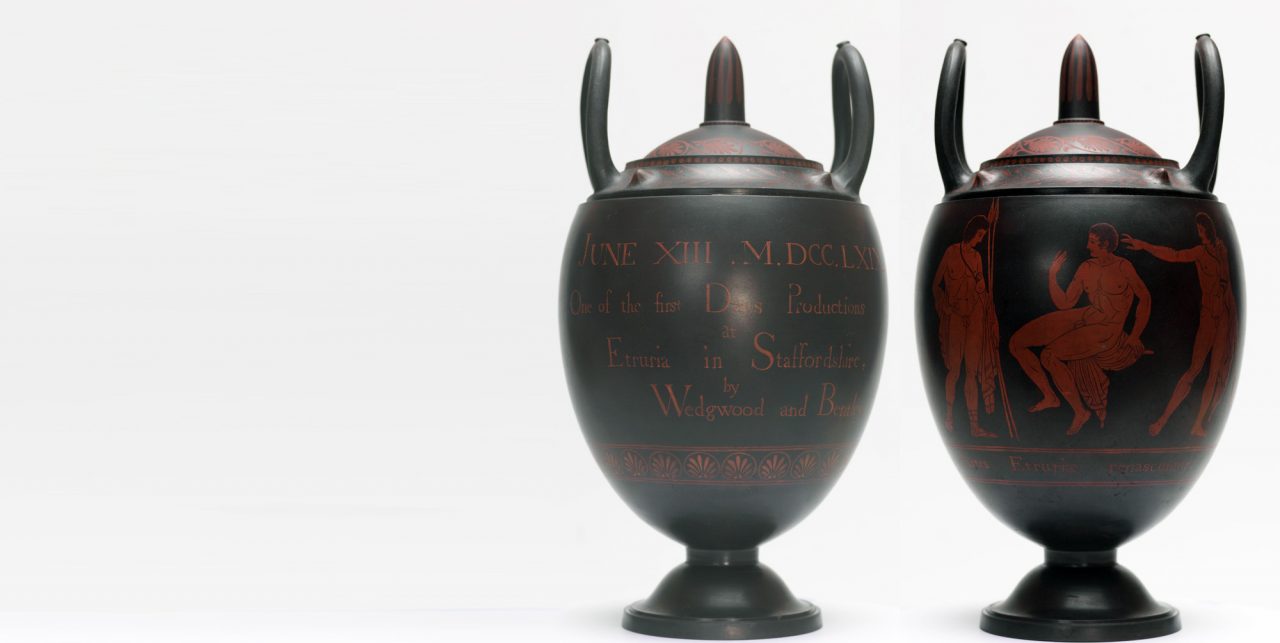 Certainly the most significant potter of 18th Century Britain, and arguably the most revered to this day, Josiah Wedgwood (1730- 95) mastered his trade early. Hailing from a large family of established potters in Staffordshire, the young Wedgwood learned how to throw in the workshop of his older brother, Thomas. Years later, Wedgwood became renowned for his experiments, technical innovations and more specifically, for his creamware body and glaze—renamed ‘Queen’s Ware’ after he became ‘potter to Her Majesty’ in 1766. It was during a visit to Liverpool in 1762 that Wedgwood met the well travelled and cultivated merchant Thomas Bentley (1730-80). So began a business partnership destined to produce creative and commercial harmony.

In partnership with Bentley, Wedgwood developed his plans for a purposebuilt factory, which stretched along 150 yards of the Trent and Mersey Canal and became known as Etruria, after the Greco-Roman origins of the ceramics he was so influenced by. On the opening day of the Etruria works on 13th June 1769, Wedgwood threw six ‘First Day’s Vases’ using his newly-perfected black basalt stoneware clay ‘body’, while Bentley turned the great hand-cranked potters’ wheel. The near-identical vases were sent to the pair’s decorating workshop in Chelsea to be painted in encaustic enamel colours that were to imitate ancient ‘red-figure’ examples. Only four survived the firing process however, and these four first day vases are the only known ceramics to have been thrown by Wedgwood himself. The Etruria factory building was destroyed in the 1960s.

While the details differ slightly, both the decoration and shape of the four vases derive from engravings in Sir William Hamilton’s catalogue, ‘Antiquitiés, Etrusques, Grecques et Romaines’, of the most important collection of Greek vases at the time. The neo-classical decoration on all four vases is based on a vase illustrated in this publication, decorated with six figures representing Hercules in the garden of Hesperides. The ceramic body and the enamelling technique were developed specifically by Wedgwood, marking him as one of the most influential industrialists of 18th Century Britain.

These detailed figures were almost certainly painted by William Hopkins Craft (1735-1811), the most skilled decorator working for Wedgwood and Bentley at the time. The decorative borders are presumed to have been executed by David Rhodes, the manager of the workshop. Below the classical decoration, Wedgwood had the inscription ‘Artes Etruriae Renascuntur’, which means ‘The Arts of Etruria are Reborn’.

Certainly, his first day’s vases seem to offer an effortless relationship between contemporary innovation and classical influence—symbols of Wedgwood’s ambition to match, if not surpass, the monumental ceramics of the past. In what was arguably the world’s first global brand and birth of one of the nation’s most important industries, Wedgwood went on to modernise his production and promote his wares to an expanding cliental.

Of the four existing first day vases, two are part of the Wedgwood Collection, owned by the Victoria and Albert museum (V&A) and on long-term loan to the Wedgwood Museum. The third is owned by the Wedgwood family, and the fourth has recently been acquired by the Potteries Museum and Art Gallery in Stoke-on-Trent. This particular vase had been on loan to the museum for 35 years until it was withdrawn by its owner and sold at Christie’s ‘Exceptional Sale’ in London, July 2016. On applying for an export license, the new owner—who bought the piece for £482,500—was issued a temporary export bar, giving UK buyers the chance to purchase the vase and keep it in the UK. A fundraising appeal was launched and donations flooded in from the public, local business, the Art Fund and the Arts Council/V&A Purchase Grant Fund. The National Heritage Memorial Fund issued a grant of up to £267,500 to help make up the shortfall, and the target was reached during the week of the 248th anniversary of the vase being made by Wedgwood.

Returned to its home, the iconic vase now serves to remind all of both the legacy of Wedgwood and the historical importance of the area’s industrial past.

The Queen of Gems: Defining the Pearl