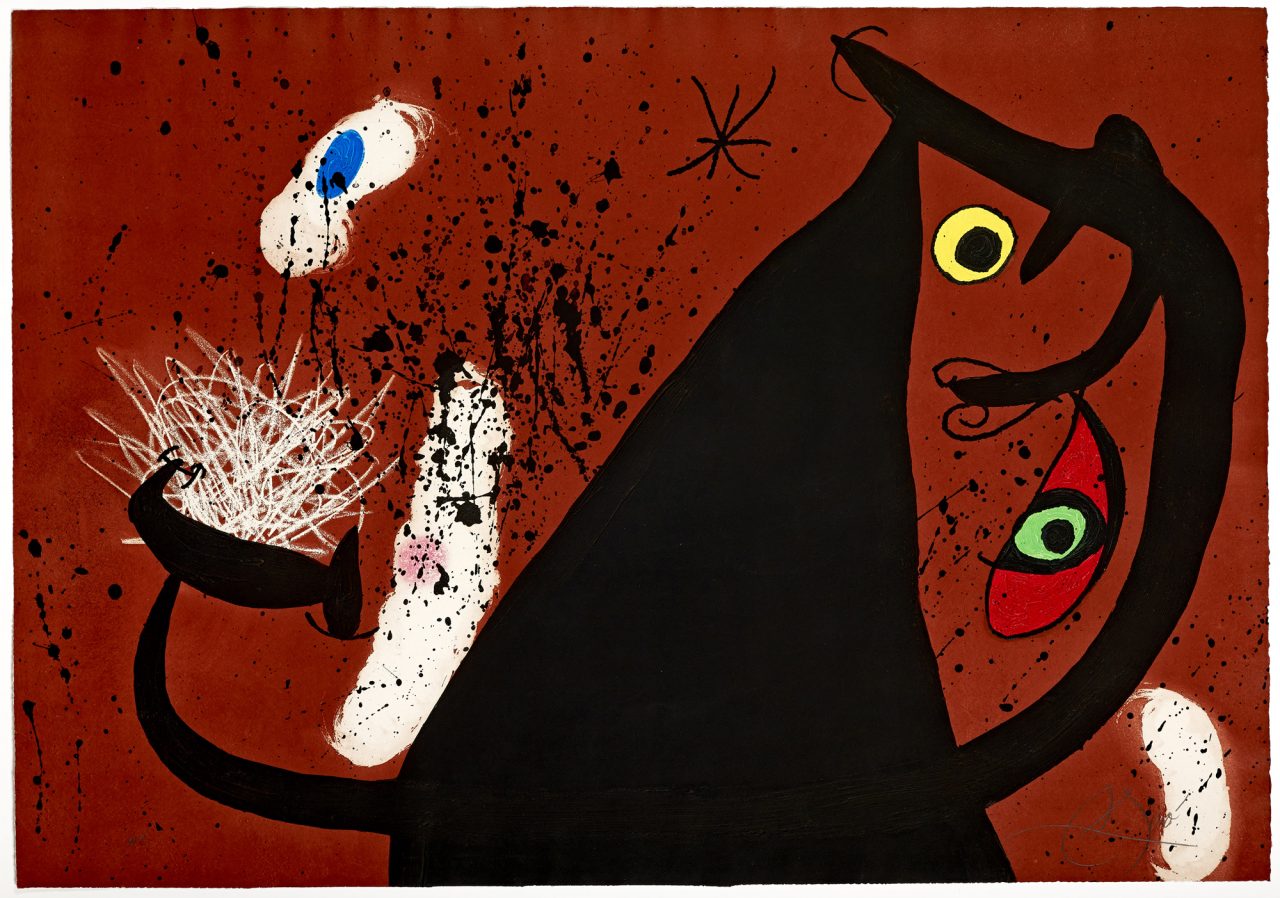 From 29th June to 17th November 2019, the Fondation Maeght in Saint-Paul-de-Vence, France is celebrating Joan Miró, a major player in the foundation’s creation alongside Marguerite and Aimé Maeght and their architect friend Josep Lluís Sert. The exhibition Joan Miró: Beyond Painting, curated by Rosa Maria Malet, former director of the Fundació Joan Miró in Barcelona, gives visitors the opportunity to discover an essential aspect of the artist: his exceptional graphic work.

A set of gouaches, artist’s proofs, posters, prints, lithographs, final proofs and rare books, most never seen before, shed light on this prodigious creative work. Many of these pieces were generously donated by the Maeght family to the Fondation Marguerite et Aimé Maeght.

Joan Miró produced most of his graphic work at the ARTE print studio, founded by Adrien Maeght in 1964. Miró’s close bond with his friend Adrien enabled him to use all the possibilities offered by a print studio, and he loved experimenting with new processes. Rare copper plates and artist’s proofs are on show for the first time, giving a better understanding of Joan Miró’s printed work, its evolution, its scale and its richness. The hang is focused around four main ideas: Miró and the Poets; the Concept of Collage; Combinatorial Possibilities and Surpassing Techniques. Joan Miró’s enthusiasm for printing led him to create over 3,000 original printed works.

“For me, engraving is a fine means of expression. It has been a means of liberation, of expansion, of discovery. Initially, however, I was a prisoner of its constraints, of its ‘cooking’, of its tools and recipes that were too dependent on tradition. That had to be resisted and dealt with, and then a huge field of possibilities opened up to the gaze and to the hand… The despotism of the tool was gradually defeated. I can use a pointed tool or a burin, and my fingers, my hands, a nail or an old screwdriver too. I’ve even been able to free myself from the paper normally used, and have proofs made on the unlikeliest kinds of paper.” – Joan Miró

Miró and the Poets

Miró’s graphic work venture began in 1927 as a result of his relationships and friendships with poets. It was at that time that he produced eight pochoirs for the book Il était une petite pie (Once There Was a Little Magpie) written by Lise Hirtz and published the following year. Each of the eight prints was inspired by the text, though there was no intention to illustrate it.

Miró’s approach was not to translate what he had read into images, but to give his version of what the text had suggested to him. He followed this procedure in all of his extensive production of rare books, and that is what gave it its richness and diversity.

If 20th-century art, in the broadest of senses, had to be identified by a single technique, it is very likely that it would be collage: paper stuck onto an assembly. The collage had become so strongly rooted in painting that it could never be removed from it. In 1917, Miró painted La Publicitat, on which he had stuck the heading of the newspaper of the same name. From then on, he used collage as a concept in the widest of senses. The idea of incorporating elements that were traditionally alien to a composition would become increasingly important to Miró’s work, and his graphic work was no exception: “With coloured inks to colour the sheets of paper and later printing the prints on them; sticking various bits of cloth in assorted colours to the paper and then printing the print on it; spitting on a prepared plate and then beginning too engrave it based on the marks; tracing transfers on the paper and then printing the print on it. Printing on pieces of cloth, table runners, etc.”

With Louis Marcoussis’s technical guidance, Miró did etchings and drypoint engravings in 1938. The outcome of that experience was remarkable for two reasons. Firstly, the quality of those engravings; there was nothing in them to suggest that they were the work of a novice. And secondly, the particular characteristics of two of the engravings, specifically Portrait of Miró and the Black and Red Series, made them true works of art.

With the Série noire et rouge (Black and Red Series), using a resource that was very much his own, Miró achieved great variety from a single image. It was like playing a combinatory game involving images, words and ideas.

The play on inks and colours reached its high point when Miró discovered scanners and the possibilities they offered. Passionate about new techniques and very aware of Miró’s interest in them, Adrien Maeght purchased a scanner for the ARTE print shop with Miró uppermost in his mind. That was the origin of Défilé de mannequins (Mannequin Parade) and Délire du couturier (Fashion Frenzy), in which the play on colours, contrasting with black, was a key feature.

Some combinations were rendered possible by the colours, and others by the shape. Thus, with an undeniable sense of humour, the engraving containing a blot in the shape of a face in profile with an eye sticking out takes the title Polyphème or Emèhpylop, depending on which side you look at it from. Similarly, in Emballage and Déballage, Miró played with stencilled letters that are commonplace in the commercial and shipping settings.

The more Miró learnt about the secrets of engraving, the more he wanted to know. Each discovery was a new stimulus. Initially, he wanted to learn from everyone who could teach him new formulas to enable him to experiment and find new solutions. However, Joan Miró’s great moment of renewal in engraving came when he discovered the carborundum printmaking technique that Henri Goetz had developed. Miró manifested his interest in working with it as follows: “An artist can express himself with greater richness and freedom, which give the gesture a fine substance and much more power. If you wouldn’t mind, I’d like to use this procedure.” Unlike the intaglio printmaking technique, which allows prints to be made from a deep-inked plate, carborundum – a synthetic coating applied to the plate – creates a particular texture when printed on paper. For Miró, the possibility of getting a tactile quality in his engravings was tantamount to taking a new step forward in the research he had conducted throughout his career.

Exhibition catalog on sale at the Fondation Maeght bookshop.

Picasso and the Spanish Masters