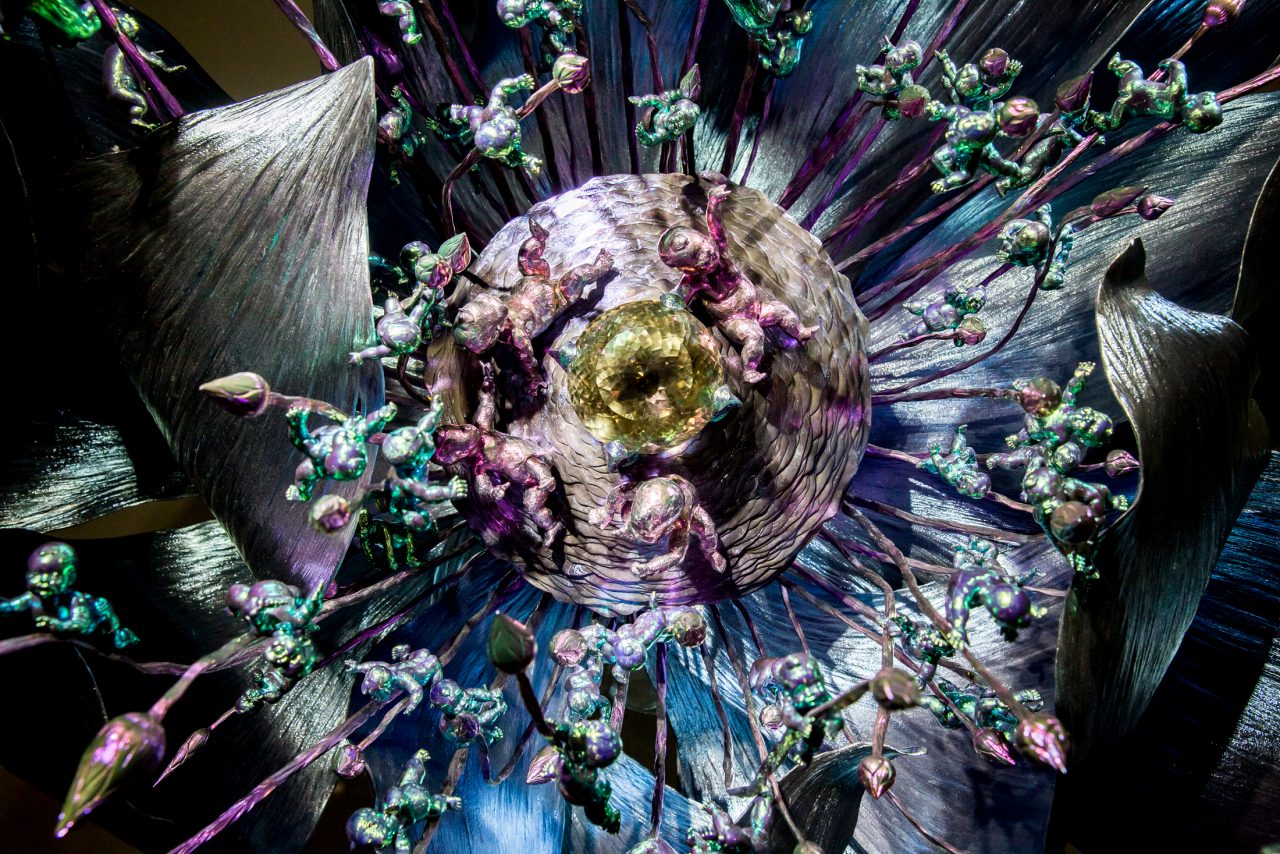 A close up of 'Lotus Children' sculpture. Image Courtesy of Wallace Chan

Jewellery artist Wallace Chan, will be presenting his first solo show in London. The exhibition titled, SHAPESHIFTER: The Multiverse of Wallace Chan, will be open at Asia House on the 14th to the 17th of September 2019.  Twenty jewellery pieces created as part of Wallace Chan’s collection will feature as part of his latest groundbreaking innovation. His most recent jewellery innovation is a super-strength porcelain that is five times harder than steel, and ten titanium sculptures demonstrate the jewellery artist’s mastery of both materials.

In addition to being the first time it will be introduced to art lovers in London, The Multiverse of Wallace Chan will be the penultimate in a series of international exhibitions, following presentations at Crosby Street Hotel and Christie’s Gallery in Hong Kong. The exhibition will chronicle the development of Wallace Chan’s jewellery, alongside never-before-seen pieces. Moreover, the exhibition will draw attention to Wallace Chan’s work as a sculptor with key not-to-be-missed highlights including a two -metre sculpture of a lotus flower, and a skull sculpture.

Titled Lotus Children, the two-metre, blooming lotus flower is made from titanium and rests on a glass plinth.

The flower’s pistil is citrine and is surrounded by four rotating figurines of small children, symbolising each season.

Contrastingly,  the second sculpture adopts a darker ambience with a skull formed from titanium. Nonetheless, the sculpture’s title, Memories, from Death to Life, celebrates both death and life equally.

Jewellery highlights will encompass an assortment of intricate designs of jewellery, for example brooches titled Garden of Dreams and Mind Puzzle.

These go beyond being simply beautiful objects by invoking deep philosophical questions about the origins of the universe in both its spectators and wearers.

The jewellery pieces in the exhibition incorporate a wide range of materials such as titanium and The Wallace Chan Porcelain. The pieces are also adorned with different gems and precious stones including rubies, pearls, sapphires, opals, amethyst, topaz and lapis lazuli, among others.

Wallace Chan said, “I look forward to introducing The Wallace Chan Porcelain to London – one of the most innovative cities in the world – in the beautiful setting of Asia House that speaks to the historical and cultural importance of porcelain in China and its influence in Europe. I always feel that I have a responsibility to innovate, whether through the invention of a new idea, technique, tool or material. My porcelain allows me to realise many new creations that defy the limits of wearable art, just as titanium did in the past decade. Perhaps, like titanium, it will serve to inspire others to explore the possibilities of jewellery creations and sculptural art.”

The exhibition will be accompanied by a public programme of events including talks, guided tours and handling sessions, with more details to be announced soon. Coinciding with this London exhibition, one of Wallace Chan’s creations is currently on view in the exhibition Jewels of Nature, at Naturama in Svendborg, Denmark, running until 30th of December 2019.