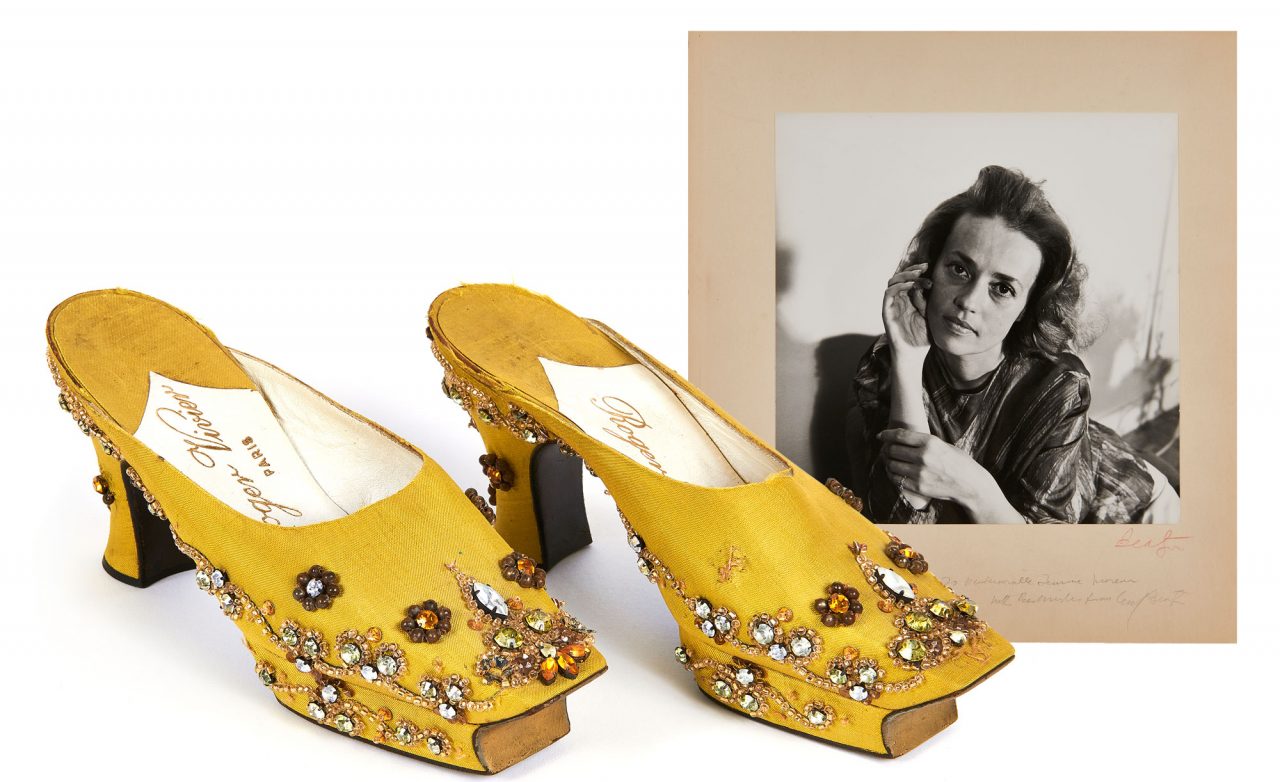 From 16th to 22nd October 2020, Artcurial will hold a sale and exhibition of the Jeanne Moreau Collection, comprising nearly 300 lots, including wardrobe items, jewellery and unpublished photographs.

Jeanne Moreau, who died in 2017, was an actress in the theatre and cinema, a director, author and performer. The tribute sale comprising nearly 300 lots comes largely from the artist’s wardrobe as worn in films and at award evenings. There will also be items of jewellery and posters, as well as around forty photographs of Jeanne Moreau, whose image was immortalised by a host of famous names including Helmut Newton, Peter Lindbergh, Cécil Beaton, Bettina Rheims, Henri Cartier-Bresson, Agnès Varda and Slim Aarons.

This entirely online sale, in aid of the Jeanne Moreau Foundation, will take place while the collection is on show at Artcurial.

A love of art in all its forms guided Jean Moreau (1928-2017) throughout her life and the Jean Moreau Foundation has been entrusted with passing this on, a task that was close to her heart. The role of the Foundation is to protect the creative work of the artist, encourage initiatives in artistic and cultural areas with a focus on making the theatre and cinema more accessible for children.

“This sale offers an opportunity to pay tribute to this immensely talented artist immortalised through the lens of the 20th century’s greatest photographers” says Stéphane Aubert, Auctioneer and Associate Director. “Our aim, in presenting the sale of this important wardrobe, has been to honour the timeless style and elegance of Mademoiselle Moreau, the muse of both filmmakers and fashion designers.”

A sensual and eclectic cult figure, Jeanne Moreau was a resolutely modern actress who became the face of the Nouvelle Vague. She had an aura and a raw talent that captivated the greatest directors in France and abroad, including Louis Malle, François Truffaut, Roger Vadim, Luis Buñuel, Michelangelo Antonioni, Wim Wenders, Orson Welles, Claude Lellouche, Jacques Demy, Agnès Varda, François Ozon and others. She was a rare phenomenon destined to become an all-time great.

She starred alongside the greats including Jean-Paul Belmondo, Michel Piccoli, Jean Gabin, Fernandel and Marcello Mastroianni. She was one of the first actresses of her stature to say ‘yes’ to television, working under the direction of Orson Welles (Histoire Immortelle or Jean Renoir (Le Petit Théâtre) in the 60s, of Jacques Doillon in the 80s and also of Josée Dayan in the 2000s-2010s.

In 1992, Jeanne Moreau received the César for best actress for her role in La Vieille qui Marchait dans la Mer. The honours and recognition never stopped. Jules et Jim by François Truffaut, the most well-known film of her acting career, in which she sang Le Tourbillon by Serge Rezvani, gave rise to a real passion for writing and musical interpretation.

She became a muse for a number of filmmakers, couturiers and photographers, among them Helmut Newton, Peter Lindbergh, Cécil Beaton, Bettina Rheims, Henri Cartier-Bresson, Agnès Varda and Slim Aarons.

It was during a costume fitting for Eva, the film by Joseph Losey, that Jeanne Moreau first met Pierre Cardin, the iconoclastic couturier who shook up the fashion world by mixing prêt-à-porter with haute couture, using startling geometric forms and unusual materials. He created flamboyant costumes for, amongst others, La Baie des Anges by Jacques Demy, Journal d’une femme de Chambre by Luis Buñuel, and La Mariée était en Noir by François Truffaut. He also designed the green academician’s outfit worn by Moreau when she became the first woman to be inducted into the Académie des Beaux-Arts de l’Institut de France. Their intense relationship, between love and friendship, allowed the actress to retain a bold outlook on the world of fashion.

Jeanne Moreau formed a close bond with Coco Chanel during the fitting sessions at 31 Rue Cambon, and Artcurial will offer an outfit in black velvet and ivory satin made by Karl Lagerfield for Jeanne Moreau (estimate: €250 – 450 ). Yves Saint Laurent was also a constant presence in the artist’s life. In addition to pieces of Haute Couture, such as a gold lamé coat and dress combination (estimate: €400 – 600 ), the sale will also include some of Jeanne Moreau’s favourite pieces of jewellery by Yves Saint Laurent, Chanel, Hervé Van Der Straeten and a Cartier pendant in white gold set with a diamond (estimate : €700 – 900).