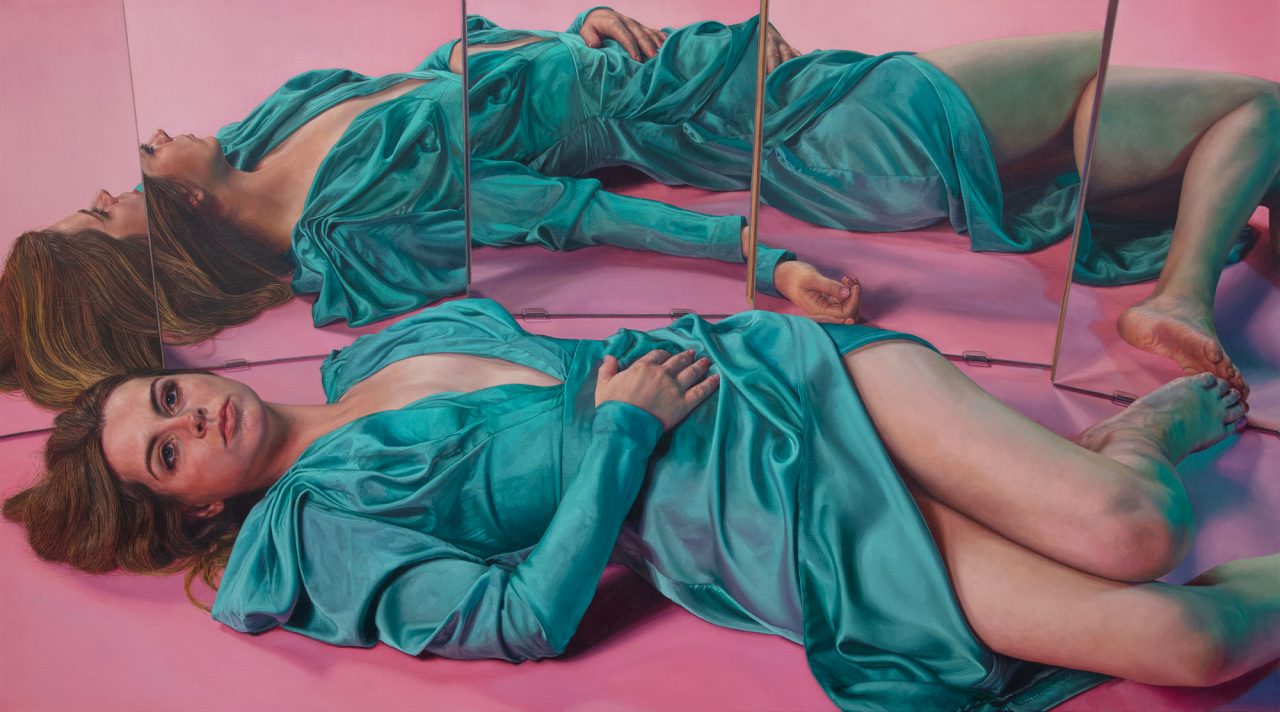 Born in Banbridge in 1983, Cumberland is best known for his hyperrealist portraits of isolated subjects in detailed interiors, exploring themes of mass media culture, surveillance and the notion of the human ‘self’ (image top of page: Ian Cumberland, Panopticon, 2019/20 Oil on linen, 100 x 180 cm).

Presence in Absence consists of installations that utilise portraits as part of a multi-part tableau, establishing a dialogue between objects. Cumberland’s works involve an assemblage of theatrical objects, adding abnormal touches and unsettling atmospheres within mundane interiors, giving rise to an acute degree of realism. The subjects are caught in moments of escape from their psychological containment, similar to one experienced by people during the pandemic. This is Presence in Absence, a social commentary on a sociological crisis.

Cumberland is meticulous with his choices – everything is precisely controlled from the colour palette, the outfits, the lighting to the overall set. This staging and organisation are a commentary on our society, how we are manipulated to believe in lifestyles and material goods.

Get the Look 2020 (2020) perfectly demonstrates Ian Cumberland,  by containing text that itemises the cost of every element in the staged scene with the neon sign reflecting our image-saturated, commodity-driven world. The woman is surrounded by objects of capitalist desire – get the look, the dress, the Persian rug. It is a command; we are being told what we should be wearing and how we should be living.

Behind her, the television shows a still from some unidentifiable ravaged landscape, possibly caused by deforestation for the creation of materials, mass pollution in fast fashion, spurred on by our insatiable desire to ‘get the look’. Reminiscent of Brecht and his theatre sets, the individuals in Cumberland’s works are faced with a multitude of choices and possibilities and it is up to the viewer to decide what those choices will be. Although Cumberland begins the story, the audience finishes it.

Cumberland’s genius shines through when he challenges conventional ‘painting’ and produces something wholly original and unique, transcending traditional painting as we know it and questioning representational strategies. By utilising paintings within a wider installation, Cumberland adds another layer through which the viewer, or the voyeur, must engage with the complex subjects in his work.

“Encountering the work of Ian Cumberland is a peculiar, unsettling experience, as if the viewer has intruded into a ‘space’ and a ‘moment’ to which they are alien. Positioned as an outsider, Cumberland’s series of multi component tableaux seem to offer a viewing experience that falls somewhere between an invitation to eavesdrop and an unintended moment of voyeurism” says David Campbell, writer and curator.

Presence in Absence explores different manifestations of ‘Realism’ by bringing together painting and installation. In so doing, Cumberland presents a wholly unique experience of the effects of mass media, culture and control on humanity’s notion of self.