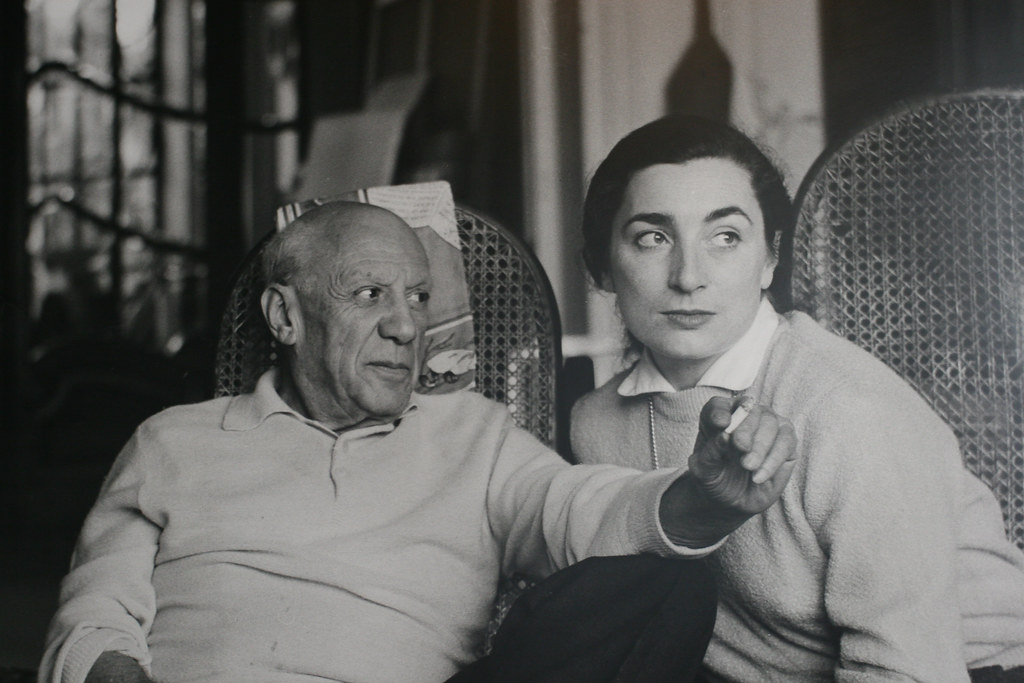 It was at the Madoura Pottery Plant in Vallouris, France that Jacqueline Roque first met an ageing Pablo Picasso. He was quickly became charmed by her, to the point where he would deliver a rose to her every day, until she eventually agreed to be his companion.

Their relationship is allegorised through Picasso’s 1962 painting, Femme Au Chien. At an astonishing, estimated 633 x 511 inches, the colossal oil painting emphasises the profound impact Jacqueline Roque’s entry into Picasso’s life had on his artistic oeuvre. The canvas retains references to Picasso’s early cubist styles and amalgamates these with modern, sculptural elements to create not only a fusion of vivid colour, but simultaneously a convoluted coalescence of man and woman.

Jacqueline Roque remained with Picasso until his death in 1973 and was the most featured woman across his artwork. The circumstances surrounding their meeting were not traditional, with Picasso becoming entangled with Roque while he was still with Françoise Gilot, the mother of his two children. Jacqueline’s relationship to Picasso is described by William Rubin, (cited in Picasso, Fineberg and Duncan, 2014, p.190) as an ‘understated, gentle, and loving personality combined with her unconditional commitment to [Picasso] providing an emotionally stable life and a dependable foyer over a longer period of time than he had ever before enjoyed’.

The closeness of their relationship is verified further by the bond she shared with Picasso’s Afghan Greyhound, Kaboul, named after the capital of Afghanistan. The dog is the second protagonist of Femme Au Chien and its inclusion has been a recurring motif throughout Picasso’s artworks, as evident in Garçon au Chien, 1905 and Femme et Chien Sous un Arbre, 1961-1962.

Kaboul is present in a number of portraits with Jacqueline Roque and often her features are indistinguishable from the dog’s facial features; consequently, blurring the barriers between human and hound. Picasso himself speculated, ‘often, if he comes into my mind when I am working, it alters what I do. The nose on the face I am drawing gets longer and sharper. The hair of the woman I am sketching gets longer and fluffy, resting against her cheeks just as his ears rest against his head’ (Picasso, cited in B.Friedewald, 2014, p.51).

Picasso would finally go on to complete six oil paintings of both Jacqueline and Kaboul, signifying early on to his critics and spectators that Jacqueline Roque would be a consistent fixture in his life and his love for her was as prominent as his first love of dogs. She as Marie-Laure Bernadac observes, never models or poses for him, though the ‘image of the woman he loves is a model imprinted deep within him, and it emerges every time he paints a woman’ (Bernadac, cited in Picasso, 1988, p.78).

Nonetheless, while Jacqueline Roque had a profound and endearing imprint on Picasso’s painting, his relationship with the women in his life remained rooted in endless layers of chauvinism and misogyny. He believed ‘there were only two kinds of women: goddesses and doormats’. Marina Picasso, the granddaughter of Picasso, summarised the impact of his artistic obsessiveness and narcissism on the family in her memoir, Picasso: My Grandfather, “No one in my family ever managed to escape the stranglehold of his genius…He needed blood to sign each of his paintings: my father’s blood, my brother’s, my mother’s, my grandmother’s and mine.”

Marina Picasso is the daughter of Picasso’s son, Paulo Picasso, who was born from the painter’s first marriage to Olga Khokhlova.

The birth of Paulo Picasso and his early years were the happiest highlights of Pablo Picasso’s life and of his marriage to Olga, in addition to marking an artistic shift,  as he returned to representationalism with large nude paintings. Nevertheless, his marriage to Olgo Khoklova disintegrated when news of his affair with Marie-Thérèse, which became heightened during Olga’s hospitalisation to treat her haemorrhaging, came to his wife’s attention.

Her jealousy was unfathomable and conjured up in him a contempt of women; an antithesis of the adoration of women implicit in his paintings of Jacqueline Roque, Olga Kohlova transitioned into Picasso’s visions of a diabolical femininity.

His anger towards Olga manifested into demonic representations of her body. Thus in Large Nude in a Red Armchair (1929) she is envisioned by Picasso with her genitals spewed across the painting. Seated on a red armchair, Picasso laconically alludes to her continuous haemorrhaging from the vagina which caused him to remain abstinent for a short period.

The Demise of the Subject

His complex pursuit of art embedding women into his paintings, metamorphosing them into artistic allegories, before dismissing them artistically and personally, was catalytic in the dismantling of the Picasso family. His son, Paulo Picasso, succumbed and died as a result of severe alcoholism following his depression, his mistress, Marie-Thérèse Walter, during his marriage to his first wife hung herself, as did Dora Maar, the mistress after. Pablito Picasso, his grandson committed suicide by consuming bleach and Jacqueline Roque shot herself.

He informed Françoise Gilot, the mistress following Dora Maar, “Women are machines for suffering.” Speaking of Picasso’s artistic process in regards to the representation of women in his paintings and sculptures, Marina Picasso stated, “He submitted them to his animal sexuality, tamed them, bewitched them, ingested them, and crushed them onto his canvas. After he had spent many nights extracting their essence, once they were bled dry, he would dispose of them.”

Indisputably, the changing faces of Picasso’s muses:  Fernande Olivier, Olga Khoklova, Marie-Thérèse Walte, Dora Maar, Françoise Gilot and Jacqueline Roqu are the impetus behind the entirety of his artistic canon. His art works move in accordance with the feelings he held towards his different muses, whether they were rage, love or jealousy.

Nonetheless, the catastrophic impact he had on each of his muses, even to his most beloved and final muse, Jacqueline Roque, who inspired in him more than 400 portraits of her, cannot be contested. Although, immortalised into stone, ceramic and canvas, Jacqueline Roque and the other five muses in Picasso’s lifetime were left psychologically ruptured – a rupture that would encapsulate another two generations of the Picasso family.

Femme Au Chien will be offered as a highlight of Sotheby’s Impressionist & Modern Art Evening Sale. (14 May | New York). Sotheby’s Impressionist & Modern Art Evening sale encompasses an ethereal collection of art works from the 19th and 20th centuries. From a bird’s eye view of the Parisian streets painted by Gustave Caillebotte in 1878 to a delicate depiction of Pierre Bonnard’s muse at her toilette; in addition to a vivacious large-scale Mousquetaire by Pablo Picasso, whose grandeur bounds from the canvas. The paintings, drawings and sculptures amassed communicate the complexity and dynamism tracing this era.