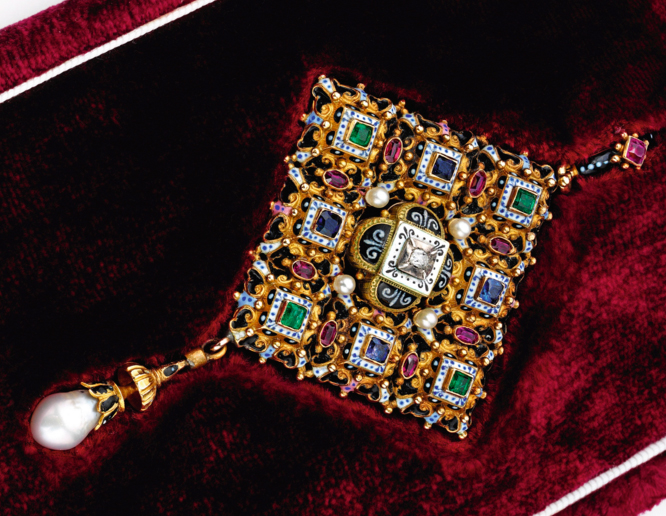 Sotheby’s Renaissance Revival collection was featured in the Magnificent Jewels auction in spring. Incorporating intricate enamel work, old mine diamonds, delicate seed pearls, ornate filigree and other enchanting details, the value of these pieces is dictated by the craftsmanship, magnificent, detailed designs and their historical significance. Originally popularised during the 19th century by master jewelers and goldsmiths such as Castellani and Giuliano, the collection is inspired by the classical antiquity unique to the Renaissance.

These Renaissance inspired pieces are available to examine in the Magnificent Jewels Auction Overview.

Born in 1794, the renowned Italian jeweller Fortunato Pio Castellani was intrigued by the archaeological artefacts at excavation sites found nearby. He utilised ancient goldsmithing techniques such as Etruscan granulation, and became the catalyst for the renaissance revivalist movement in Italy. The ancient granulation technique is behind the creation of his stunning Green Beryl and Seed Pearl Necklace.

His distinctive techniques used to create these detailed mosaics and carved gemstones were all central to restoring the Renaissance revivalist style and he continued his reverence for classical styles at the Castellani firm he founded. Despite the firm’s closure in 1930, its global reputation survives.

Enshrining the Madonna in an emerald cameo at centre of the pendant, Castellani implements a clawed collet outside a frame of scroll design adorned with interchanging green and red enamel. The enamel is set against old mine-cut diamonds and rubies which are held in place in collets laced with back enamel.
See also: Botticelli Sells for Record $92m at Sotheby’s New York

After his subsequent move to London  in 1860 from Italy, Giuliano produced jewels in the archaeological revival style and thereafter in the Renaissance revival style. Giuliano’s creations were sold at esteemed jewellery stores based in the West End, before he opened his own store in Piccadilly.

Made by Giuilano approximately around 1860, the Gold Enamel and Gem Set Pendant completely embodies the Renaissance Revival style, through its embellishments of square cut emeralds, sapphires and rubies which are all further accentuated by seed pearls and the diamond encapsulating the centre. The level of detail does not end there; the borders are lined by pink, white, blue and black enamel with a pearl drop anchoring the pendant.