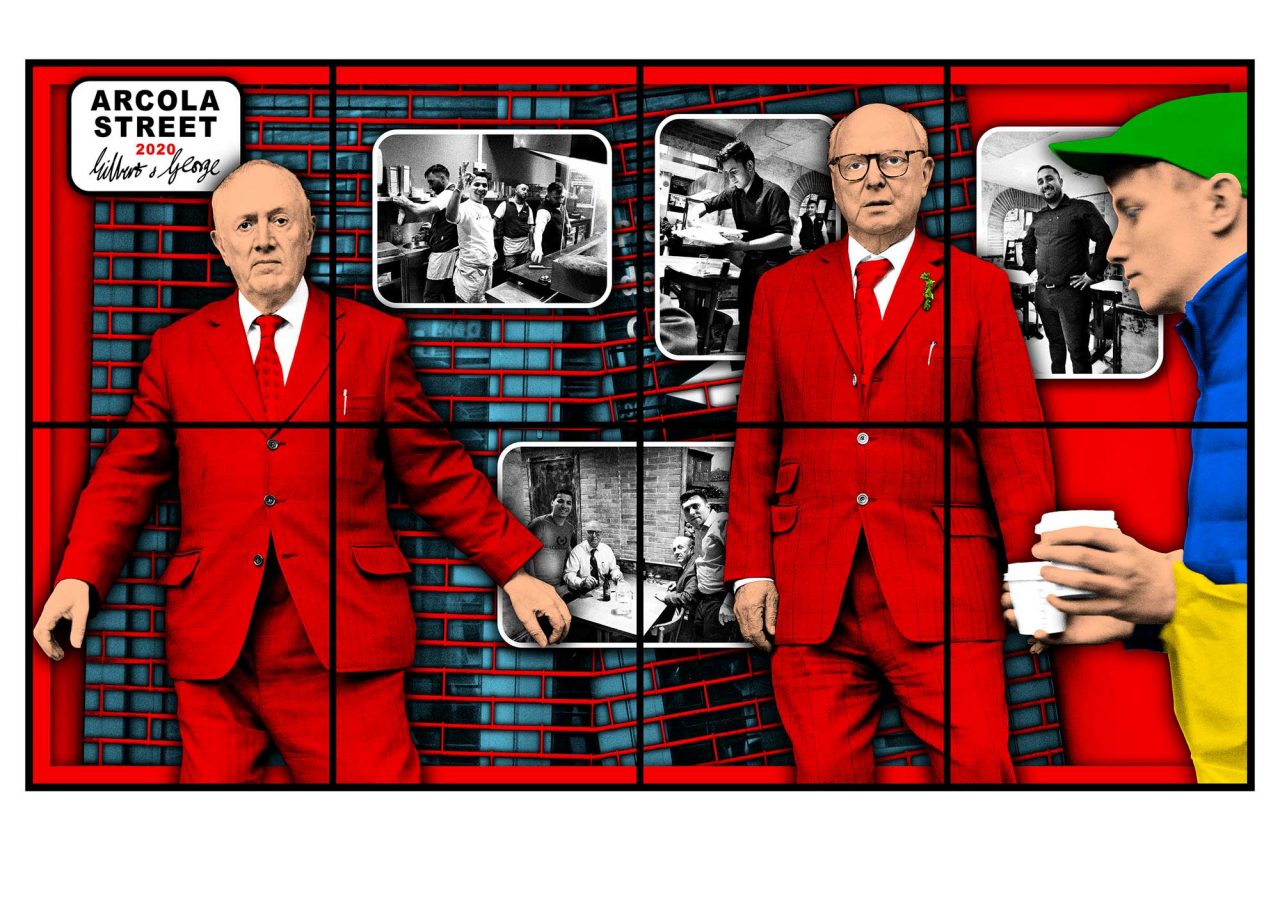 Gilbert & George’s creative life was formed when they met as students at Saint Martin’s School of Art in 1967. The indivisibility of their art and everyday life was given early expression in their Living Sculptures from 1969, but it was not until two years later that they created the first of their landmark pictures.

Simultaneously the subject and object of their art, they declared in 1971: ‘Art is life and we create art for all.’

Their home and studio on Fournier Street, East London has formed the epicentre of their art ever since. As Gilbert & George always said: ‘We never want to show life or reflect life we are creating pictures to form our tomorrows.’ By relentlessly challenging social conventions and the artistic canon, their art has, in turn, radically transformed the landscape of contemporary art in Britain and the wider world.

Created over the past two years, the NEW NORMAL PICTURES is a continuation of Gilbert & George’s street-level explorations of our modern world.

‘We are asking “What is human life?” and making pictures about it,’ the artists explain. Although these pictures predate the pandemic, they resonate with the universal experience of a ‘new normal’ over the past year as the world has adapted to a fundamental shift in its daily reality. However, the phrase has a broader significance for the artists, who see it as a stand-in for the word ‘existential’, referring to a sense of normality that is constantly adjusted and renewed.

This is reflected in the urban other-worldliness of their pictures and the introduction of radical new elements that contribute to their surreal intensity. ‘For us, art is an evolution. We call it a journey through life from the beginning, and being involved in something different.’

Suffused with a violently coloured haze, the clashing tonal contrasts and distortions of scale and perspective in these new pictures combine to form a vision of the modern world that is subtly off-kilter, not-quite-normal. The outsized forms of balloons used to inhale nitrous oxide or the monochrome drug bags silhouetted against a nuclear sunset contribute to the sense of an altered state.

Places such as Moss Close or the cemetery at Christ Church Spitalfields, everyday items such as bus stops and park benches, and even the familiar figures of the artists themselves are rendered uncanny and, in their own words, ‘disturbing’.

In his catalogue essay on the exhibition, the writer Michael Bracewell elaborates: ‘As Gilbert & George take their place in their art, the artists appear impassive, spectral, respectable, fearful and possessed, individuals thrown into a reality not of their choosing, frighteningly free to make sense of it as best they can. (…) If there is a unifying ‘temper’ to their art it derives from this moral vision, in which the modern condition is seen as chaotic and poetic – a matter of indifference to the universe or fate; without meaning save that which the individual creates for himself and for which he alone is responsible. (…) To this extent their art is existential, conveying the intensity of constantly renewed normality, as an active engagement with the nature of freedom and choice; with the volatility, alienation and randomness of modern life as it is bounded by technology, borderlines, and beliefs.’

An illustrated catalogue with an essay by the writer and novelist Michael Bracewell will accompany the exhibition.

Gilbert & George have exhibited internationally since 1970. They were awarded the Turner Prize in 1986, represented the UK at the 2005 Venice Biennale and were the subject of a large retrospective, titled Major Exhibition, at Tate Modern, London, in 2007.

Timothy Spall Comes Out of the Storm at Pontone Gallery