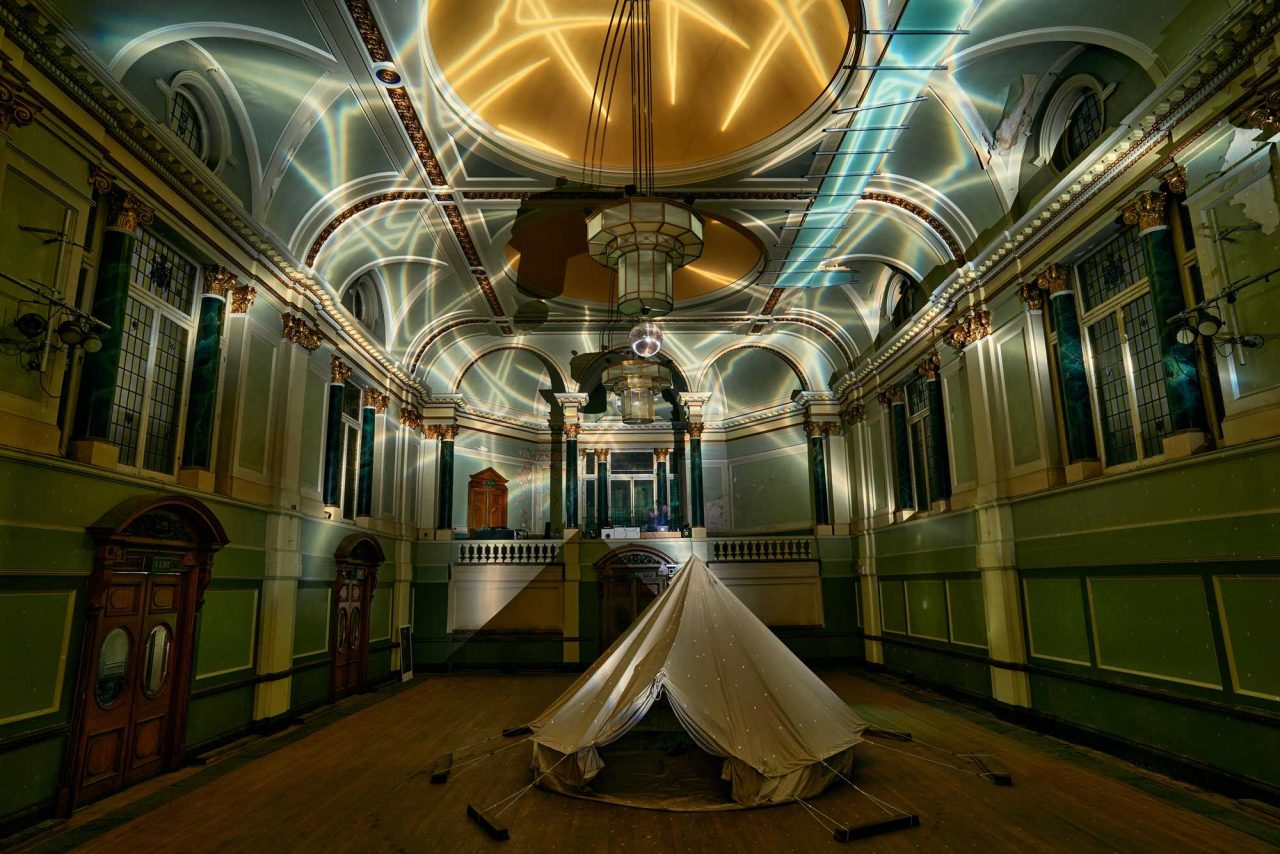 Historic Fulham Town Hall will open its doors this week for the first time in a decade as it plays host to Art in the Age of Now, a group exhibition that brings together contemporary art, live music, talks and performance art.

The 51,000 square foot building will be brought to life with over 100 artists for a free exhibition in support of London’s artistic community. The project has gained huge momentum, attracting praise and admiration from both the press and an abundance of artists.

“Tremendous energy and an amazing community that has been created. A complete labyrinth of discovery” – Conrad Shawcross

“Quite unlike anything else in London at the moment. It feels like a whole underground movement has suddenly erupted”- Ed Vaizey & Charlotte Metcalf, Break Out Culture podcast

Overseen by curator Ben Moore (Art Below), and co-presented by hotel operator Lamington Group, Art in the Age of Now will bring the ornate Grade II listed landmark to life through an engaging multidisciplinary exhibition divided across the building’s main rooms, project spaces, individual artist rooms, basement vaults and the town hall courtroom. Many of the works have been produced in isolation during lockdown and will be exhibited for the first time. This will be a unique platform to support the capital’s cultural community after a series of challenging lockdowns and a celebration of local artists and scenes.

A collective of some of the UK’s most successful and influential street artists, including Angry Dan, Ben Eine, Paul Insect and LUAP, have taken over ‘The Vaults’ in the building’s basement. Gaz Mayall has recreated Gaz’s Rock n Blues, complete with dance floor, and is exhibiting imagery and memorabilia from the last 30 years of running one of London’s most colourful club nights. MC Llamas presents ‘The Tribe’ – a series of dedicated spaces celebrating women in art including Holly Allan, Pauline Amos, Abigail Fallis, Sarah Maple and Lily Lewis.

Joe Rush – founder of the Mutoid Waste Company whose sculptures have helped shape Glastonbury down the years, is transforming the ballroom, complete with stage and sculptures recycled from salvaged material including F15 bombers and Soviet tanks. Plus installations from Conrad Shawcross, Charlotte Colbert and Louise Hall. There will be a host of talks and panel discussions throughout the duration of the free exhibition plus a series of unique live musical performances.

Situated in The Grand Hall and positioned as the exhibition’s communal hub, Ben Moore’s Los Hengeles is a scaled down astronomically-aligned replica of Stonehenge, one of the UK’s most recognisable heritage sites and brings together a wealth of collaborative creative skillsets incorporating sculpture, lighting, sound and grass. The ambitious new sculptural installation is part made from plaster of Paris which is the same plaster used in the construction of the Fulham Town Hall and follows on from other Stonehenge inspired artworks by Moore including Phone Henge (2019, made of iPhones).

A moving exhibition of portraits of missing persons by contemporary artists will also be presented at the town hall titled Unmissable and produced in partnership with the Missing People charity, it features beautiful original works by artists including Charming Baker, Nina Fowler and Mark Metcalfe. It is curated by Ben Moore and features a portrait of his brother Tom who has been missing since 2003.

In Art on Trial, editor, author and raconteur JP Pryor hosts a series of irreverent courtroom symposiums on the big issues facing contemporary art in the modern era. Featuring key artists from the show, and beyond, it promises to put modern art in the dock.

Ben Moore comments, “Curating the programme at Fulham Town Hall is a dream come true, even in these challenging times. With a positive outlook, a collaborative spirit and a shared love and passion of the work we do (myself and the artists involved), I am confident that we will be able to give West London a much-needed art event that will revive and boost its cultural heartbeat.”