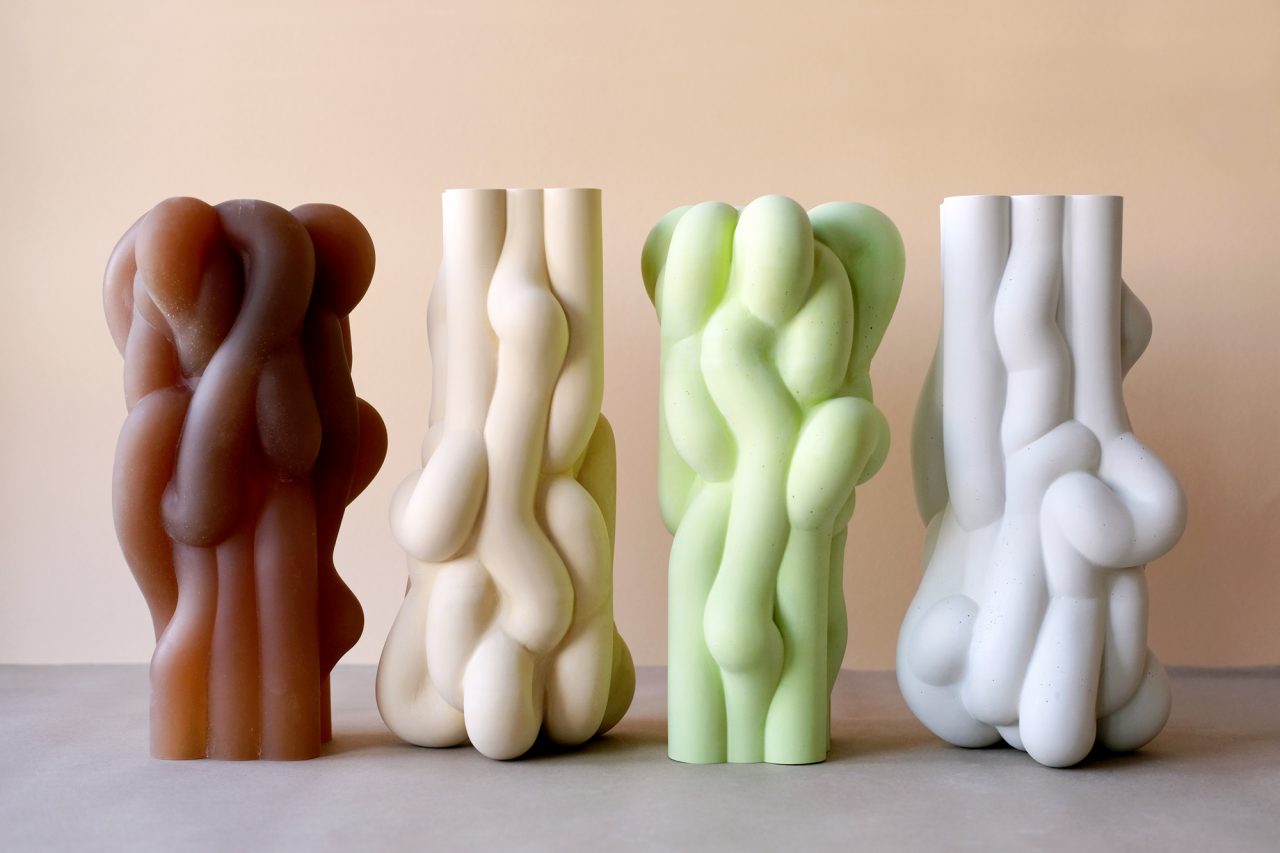 London-based ‘hybrid store’ COS, which showcases both fashion and art, has announced its latest line-up of installations by young artists including Studio Mieke Meijer, Charlotte Taylor, Haar East and Cody Cobb.

The exhibition at the historic Coal Drops Yard, Kings Cross location is on until Spring 2020. Works include a light installation from Studio Mieke Meijer, The Space Frames, which explores physical and visual lightness, balance and stability.

The new collection includes a unique array of work from artists whose works touch upon elements that were key for the COS autumn winter season – the juxtapositions between the nature and the man made. Exclusive handmade ceramics by Haar East will be showcased next to prints by Cody Cobb, whose work captures portraits of the Earth’s surface devoid of human interaction and interference. Sculptural vessels created with 3D printing and moulding techniques from Wang & Söderström will be contrasted with Charlotte Taylor’s playful illustrations of minimal structures. The edition of prints, sculptures and ceramics are presented alongside the COS collection as a fluid journey around the space. Artists include: Charlotte Taylor,Chris Wood, Cody Cobb, Dermot Russel, Gareth Hayward, Xochi Solis, Haar East, Jahic & Roethlisberger, Studio Mieke Meijer, and Wang & Söderström. Prices for works start at £30.

Charlotte Taylor’s playful illustrations of minimal structures – stairways, arches and the occasional terrazzo floor – combine real and imagined spaces. The Paris-based artist and designer describes her approach as a combination of ‘fine art practice and design process’. Inspired by Modernism and Postmodernism her digital drawings of interiors and architecture are an extension of her practice creating large-scale installations.

Chris Wood’s medium is light. She uses a range of high and low-tech optical materials to harness patterns of light that suggest ephemeral glimpsed moments in the natural world. Her sculptures are simple arrangements creating kinetic patterns in response to the environments in which they are placed. Her work brings a wistful romanticism to a minimalist aesthetic. Wood orders the accidental and makes us reflect on the experience of seeing.

Cody Cobb is a photographer based in Seattle, Washington. His photographs aim to capture brief moments of stillness from the chaos of nature. For weeks at a time, Cobb wanders the American West alone in order to fully immerse himself in seemingly untouched wilderness. This isolation allows for more sensitive observations of both the external landscape as well as the internal experience of solitude. Through subtle arrangements of light and geometry, the illusion of structure appears as a mystical visage. These portraits of the Earth’s surface are an attempt to capture the emotion of the land as much as the topography.

Gareth Hayward creates abstract landscapes in both acrylic and oils. The landscapes are mostly imaginary although inspiration is taken from his coastal environment and his childhood living in the north of England. Brighton-based, he uses a combination of layered washes and blurred brushstrokes to allow the viewer to feel and complete the landscape themselves. The landscapes may not appear obvious at first but with time areas begin to focus the eye and details become more apparent.

Xochi Solis is an Austin, TX-based mixed media artist. Her works include multilayered, collaged paintings constructed from paint, hand-dyed paper, vinyl, plastics, and images from found books and magazines. Solis considers the repeated act of layering a meditation on colour, texture, and shape, all leading to a greater awareness of the visual intricacies found in her immediate environment, both natural and cultural. Solis shares her studio time between Texas and Mexico.

Haar East is a studio created by Sarah Jeffrey. Her work is based in ceramics. Jeffrey uses pinching and coiling techniques to create sculptural works which are explorations of traditional forms of ceramic structures, such as vases. She is interested in simple, bold structures which give predominance to the decisions made around texture and the forms. The freedom of hand-building is central to all her work.

Jahic & Roethlisberger, Basel-based artist duo Admir Jahic & Comenius Roethlisberger, are well-known for their mercuriality and assorted use of media in their art projects and artworks, making them unpredictable and challenging the viewer afresh each time.

Studio Mieke Meijer is a Dutch design studio founded by Mieke Meijer and Roy Letterlé. They work on self-initiated and commissioned projects from their workshop in Eindhoven (NL). Constructive imagery, tangible materiality and tectonic detailing are the fundamentals of the studio’s strong and recognisable signature. These specific characteristics often relate directly to their architectural references.

Wang & Söderström (top of page) is a Copenhagen-based interdisciplinary studio with a focus on digital/physical exploration. The studio strives to create mind-tickling and unexpected experiences through materiality and technology. Wang & Söderström is comprised of Swedish spatial/furniture designer Anny Wang and architect Tim Söderström.

Since 2007, London-based COS has remained true to its philosophy; to offer high-quality fashion collections comprised of wardrobe staples as well as reinvented classics, in keeping with the brand ethos of modern, timeless, functional and tactile design. Inspired by the arts, COS uses traditional methods and new techniques to form understated collections made to last. Committed to both timeless design and innovation, COS collaborates with established and emerging artists, galleries and creative studios. COS has enjoyed working on projects with the Serpentine Galleries, Salone del Mobile, The Guggenheim New York, The Donald Judd Foundation, Frieze London, The Dia Art Foundation, Design Miami/, Opening Ceremony and Mr Porter and with artists such as Snarkitecture, Sou Fujimoto, Studio Swine, Wayne McGregor and AFSO / ANDRÉ FU.

The COS store in King’s Cross is situated at the historic Coal Drops Yard, an innovative shopping and lifestyle district designed by leading architectural firm, Heatherwick Studio. The space marks an exciting milestone for COS. Having firmly established its legacy of artist collaborations which celebrate the brand’s influences from the fields of design and architecture, COS shares its inspirations and interests in one hybrid space in a reimagined store concept which offers a wholly unique experience. The store acts as a multifunctional platform which has hosted site-specific works such as Orbits by designer Paul Cocksedge, Conifera by architect Arthur Mamou-Mani and his eponymous studio and Between a Dock and a Hard Place by sound artist Christine Sun Kim as part of Art Night, while offering a gallery space to emerging artists. The store offering integrates independent wellbeing, lifestyle brands and publishing houses alongside handpicked edits from the COS collection.