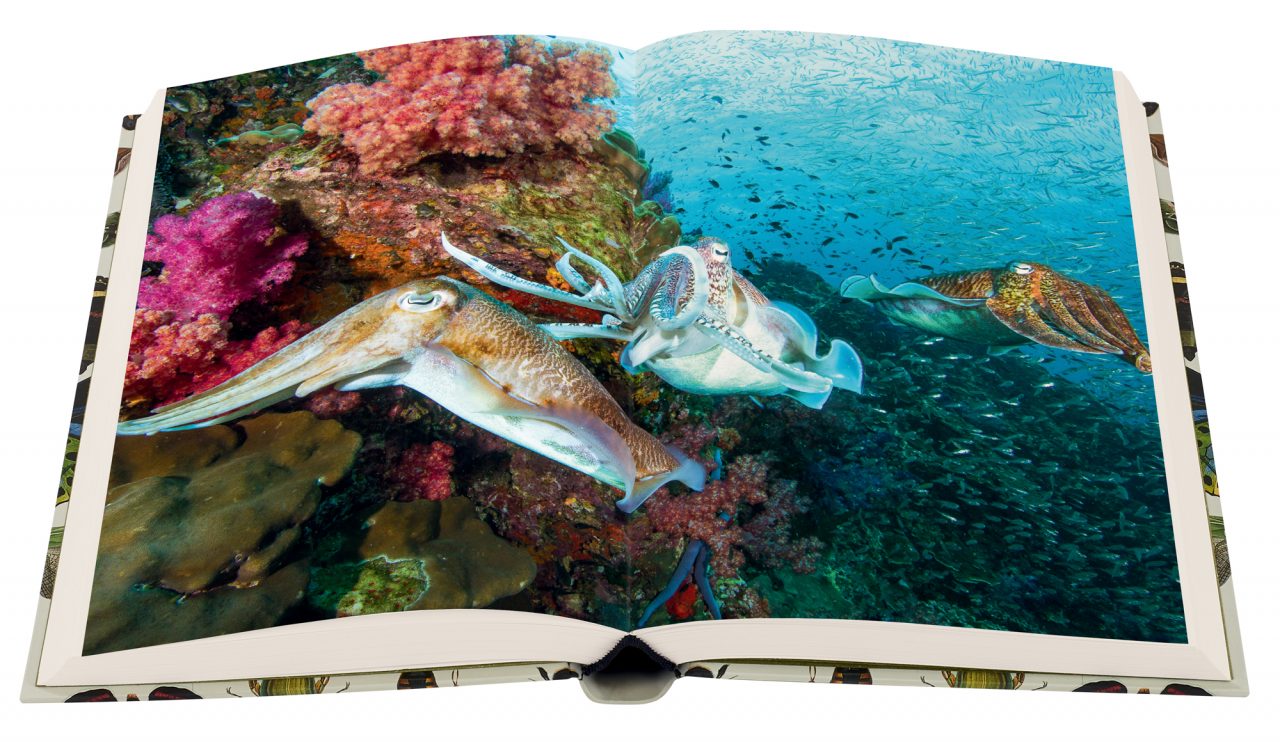 New titles from luxury book publisher The Folio Society include a children’s classic, a colourful social document and a kung fu bestseller.

No artist is better suited to illustrate this extraordinary dream world than Charles van Sandwyk. A self-taught calligrapher and illustrator, he has been compared to artists as diverse as Arthur Rackham, E. H. Shepard and Beatrix Potter. His knack of bringing animals to life with the gentlest of detailing, and pulling the traits of the human characters to the fore of each illustration makes his work utterly engaging.

Van Sandwyk has previously worked with The Folio Society on the best-selling The Wind in the Willows and How to See Fairies, (the latter of which he also wrote), as well as a sold-out limited edition of Alice in Wonderland, which was first published in 2015. This new edition includes many of the same extravagant design details as the limited edition, plus a series of colour illustrations which were originally black and white.

To complement these, each chapter opens with an elaborate full-colour dropped initial that is intertwined with motifs from the chapter: the Rabbit’s watch and tiny kid-gloves; the Queen’s roses; a tureen of mock turtle soup. Alice in Wonderland is famous for its typographic jokes (the mouse’s tail is a source of fun for designers of every edition) and there are many illustrative ‘wonders’ to discover among these pages.

Working – People Talk About What They Do All Day and How They Feel About What They Do, by Studs Terkel, introduced by Scott Simon, documents the fascinating working lives of ordinary American people. Studs Terkel’s masterful 1972 chronicle of American life, published as an illustrated edition for the first time by The Folio Society, has never lost its status as a classic of social history – not only as a document of a nation during a time of upheaval, but as a triumph of the interviewer’s craft. A Pulitzer Prize-winning radio and television broadcaster, Studs Terkel brings together conversations with more than 100 Americans about their working lives – but the author’s voice is almost entirely absent. The interviewees are granted the space to speak candidly, and at length, about their work and its significance. Their successes and fears might pre-date the Information Age, but are still resoundingly familiar – recognition for a job well done, a worry that automation will steal their livelihoods. Few segments of society are unrepresented.

Emmy award-winning broadcaster Scott Simon has worked with the National Public Radio network in America for over thirty years. In a vivid introduction exclusive to this edition, Simon, who knew Terkel for many years, writes an extraordinary personal portrait about the author’s famous eccentricities and life as a great Chicago legend.

Newly presented in a square format, this arresting collector’s edition of Working is lavishly illustrated with 40 colour photographs from the Documerica project of 1972–77, stored in the US National Archives. These glimpses of 1970s Americana join a rarely seen image of Terkel interviewing in Chicago and a striking photographic collage by celebrated designer Jamie Keenan.

In his introduction , Scott Simon writes:

Skill and craft are being replaced by software. Algorithms are overthrowing actual experience. Bus, cab, and truck drivers know they may be the last of their trade. Why take years to learn the layered and winding layout of London’s streets to drive a taxi when you can get routes on an app? But do many accountants, solicitors, restaurant servers and even surgeons realize that robotics may soon relieve them of their jobs, too? Have movie stars caught on to how many hits are now created by animatronics, not star power?

A Hero Born by Jin Yong, introduced by Ken Liu, illustrated by Ye Luying and translated by Anna Holmwood presents the 1950s bestseller which received its first English translation in 2018. Capturing all the spectacular action, humour and scope of the original novel, this is the perfect introduction to the work of Jin Yong, China’s most celebrated popular writer.

It is 1200AD, and China is a land divided. The Song empire has been driven south by the fierce Jurchen peoples, and now corrupt officials scramble to save their own hides while ordinary men and women struggle just to survive. Yet in the far north, under the eye of Genghis Khan, a young hero is rising whose destiny it is to change history… Trained in kung fu by the Seven Heroes themselves, Guo Jing will face betrayals, mythical villains and an enemy as cunning as he is ruthless. Filled with breathless action from the first page and populated with unforgettable characters, A Hero Born is the first step in a journey beloved of millions of readers worldwide.

Jin Yong is the pen name of Louis Cha, one of China’s most celebrated writers. He was best known for his work in the wuxia genre, the adventures of martial artists in ancient China that draw from real histories and philosophies, as well as timeless themes like good versus evil.

Ye Luying’s artwork is lush and kinetic. The Folio Society edition features a spectacular foil-blocked illustrated binding and a striking slipcase as well as 7 colour illustrations, two of which are double-page spreads. The award-winning fantasy writer Ken Liu has written a fascinating and detailed introduction examining Jin Yong’s remarkable life, and the unique variety of treasures to be discovered within the Legends of the Condor Heroes.

Pulitzer Prize-winning scientist Edward O. Wilson’s classic account of evolution and biodiversity represented an early alarm call to environmentalists, governments and indeed, all humanity and The Diversity of Life remains as relevant as when first published in 1992. The book gives an illuminating survey of the five great cataclysmic events of ancient history, from meteorite strikes to climate change, events which diverted evolution from its natural course. Wilson then convincingly asserts that the Earth is currently in the middle of a sixth (and likeliest the deadliest) wave of extinction, due entirely to the actions of humanity.

Wilson, one of the world’s greatest naturalists, conducts us on a tour through time, from life’s earliest beginnings to the current crisis of human driven extinction. He leads us through the natural world, explaining how species evolve, adapt and colonise to create the astonishing variety of plants and creatures we see around us. He writes with passion about the beauty and science of nature, and shows us why the threat to biodiversity today is beyond the scope of anything we have known before. Identifying the crisis in countless ecosystems around the globe: coral reefs, grasslands, polar icecaps and other habitats, he then presents a brilliant strategy for halting the extinction of the world’s species.

This Folio Society edition features a new foreword by leading author and environmentalist Bill McKibben which praises Wilson’s scientific achievements and prophetic gift. Featuring black-and-white integrated maps, charts and graphs throughout plus a superb specially researched selection of colour photographs of wildlife and plants, from giraffes and puffins to starfish and orchids, this stunning volume is presented in a beautiful binding by award-winning designer Jamie Keenan. Foreword by Bill McKibben, with a preface by the author.

In May 1896, Gaston Leroux heard about a concierge who was killed by a falling chandelier during a performance at the Opéra Garnier. Reported as a freak accident, many believed that it confirmed the existence of the fabled ghost and the seed of a story was planted. Already a successful journalist and author, Leroux put his detective stories aside to create a gothic tale with a ghoulish protagonist, and locked himself away until it was complete. The Phantom of the Opera was widely translated and serialised as soon as it was published and became a bestseller.

Set almost entirely inside the celebrated, cavernous Opéra Garnier, this macabre adventure races between the public and private spaces of this world within a world – a parallel universe of good and bad, visible and concealed, smoke and mirrors. While the opulent foyer and auditorium radiate glitz and glamour, behind the scenes it is an eerie and disorientating place, the contrast between above and below both stark and ominous.

David Coward’s 2012 translation is based on the complete unabridged text and incorporates all Leroux’s trademark stylistic flourishes. Simon Callow’s introduction could only have come from someone with his vast knowledge and experience of the theatre world. This deeply researched piece encompasses the fascinating history of the Palais Garnier as well as a biography of the eccentric workaholic Leroux.

Each of the twenty-seven chapters begins with an individually designed decoration by Taylor Dolan. The saturated colours and period poster-like style of her arresting colour illustrations and binding are inspired by a childhood spent in and around the theatre. All of Taylor’s originals for the stunning artwork were screen printed by hand for reproduction in this exquisitely produced edition from The Folio Society.

All available exclusively from The Folio Society – www.FolioSociety.com

Property From The Life and Career of Marilyn Monroe to Include Medicine Bottles, Costumes and Photographs