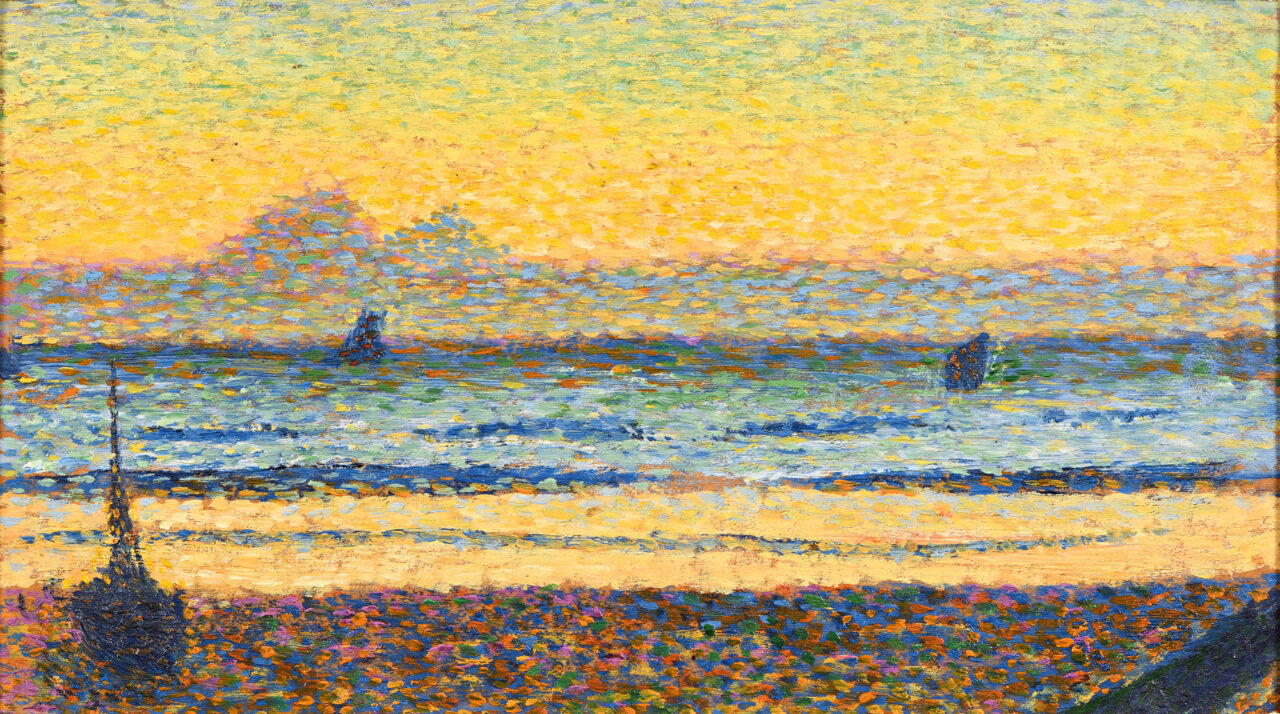 In February this year, two leading French art fairs – the venerable Biennale, one of the world’s oldest art fairs (formerly known as La Biennale des Antiquaires) and the fast-growing Fine Arts Paris – announced that they had merged to create a new annual flagship event in Paris, celebrating art from the Antiquity to present day. Fine Arts Paris & La Biennale has now unveiled details of its inaugural edition which will take place at the prestigious Carrousel du Louvre, from 9th to 13th November, before moving to the Grand Palais Ephémère in November 2023 and the renovated Grand Palais in November 2024.

Louis de Bayser, President of Fine Arts Paris & La Biennale said: “Fine Arts Paris & La Biennale is Paris’s only fair dedicated to Fine Arts, tracing the entire history of art across time and continents. In the next three years, as we move from the Carrousel du Louvre to the Grand Palais Ephémère and ultimately the Grand Palais, our objective will be to expand the fair’s global reputation and growth, as well as to contribute to reinforce Paris’s status and importance on the international art market”.

ANTIQUE FURNITURE AND DECORATIVE ARTS
France’s long and glorious tradition of furniture-making and decorative arts will be reflected in the extraordinary selection showcased by Parisian galleries Steinitz, Léage and Oscar Graf. Belgium silver specialist Janssens van der Maelen will also participate alongside London dealer Brun who will unveil a terracotta bust of Napoleon.

Furthermore, the Fair will welcome passionate gallerists with an unusual profile, including Portuguese neurologist turned collector and art dealer Mário Roque and 36-year-old Maxime Carron who, following a sporting education, created Royal Provenance, a gallery in Paris specialising in European heirlooms. Having recently sold a chair that once belonged to Queen Marie-Antoinette’s bedroom, he will unveil many more fascinating treasures, including a rare early 19th-century Morocco case containing the keys of Paris parks, possibly given by King Louis Philippe to his eldest son, Ferdinand-Philippe d’Orléans, Duke of Orléans (1810-1842) on the occasion of his coronation in 1830.

The fair will also welcome Carolle Thibaut-Pomerantz, one of very few specialists in historic wallpapers in the world. The New York/Paris-based gallerist, whose greatest finds are now part of the major museums, such as the Metropolitan Museum of Art, New York, will present a selection of wallpapers dating from the 18th century to the 1950s, including three large panels known as Jardins de Bagatelle and Jardins Anglais, designed by Pierre-Antoine Mongin and produced circa 1800-04 by the French wallpaper and fabrics manufacture, Joseph Dufour in Macon.

SCULPTURE
Sculpture will feature strongly, with some of the most discerning specialists in the discipline vying to present rare pieces. The Parisian gallery Sismann who focuses on Old Master sculpture will present a Virgin and Child in limestone, made in Toul (France), circa 1330-1340. Trebosc + van Lelyveld, Chiale and Ratton-Ladrière will amaze with an ensemble of works from the Renaissance to the early 20th century. Michel Poletti and Alain Richarme from Univers du Bronze will celebrate the Golden Age of French sculpture (1830s- 1930s) with works by Antoine-Louis Barye, Emmanuel Fremiet, Henri Laurens and a life-size bronze nude representing David victorious of Goliath, circa 1894-1910 which was once in the collection of Auguste Lumière, the inventor of the cinematograph. The bronze is one of only two known similar works by the artist, the other being in the collection of the Musée d’Orsay.

Renowned for his early 20th century animal sculptures, Xavier Eeckhout will exhibit an exquisite bronze lion cub made in 1935 by Louis de Monard. Galerie Malaquais will celebrate French figurative sculpture with Assia, a 1936 monumental sculpture by Charles Despiau, dedicated to and from the collection of the eminent French art dealer, editor and historian Georges Wildenstein (1892-1963).

MODERN AND CONTEMPORARY ART
Modern and Contemporary Art will also take centre stage in this inaugural edition of the fair. In a nod to history, Marianne Rosenberg, the granddaughter of Paul Rosenberg, perhaps the most important Modern Art dealer of the first half of the 20th century (who, for a time, worked with Wildenstein) will be present at the fair. Her New York gallery, Rosenberg & Co will exhibit a very rare oil on board by Henry Rousseau, La Citadelle, circa 1893.

Specialising in drawings for four generations, the Galerie de Bayser will unveil a magnificent charcoal drawing of a woman wiping her neck by Edgar Degas (pictured right) and a pastel depiction of a monkey by Simon Bussy. Other leading modern and contemporary art galleries will include Jill Newhouse (New York), Lancz, La Béraudière (Brussels) and reputed French dealers, such as Applicat- Prazan, Berès, Brame & Lorenceau, Laurentin, Seine 55, Ary Jan, La Présidence and Opera Gallery which will showcase a roll-call of modern and contemporary artists, from Fernand Léger and Marc Chagall to Pierre Soulages and Fernando Botero. They will be joined by two Paris-based contemporary art galleries, RX and Christophe Gaillard.

ANTIQUITIES AND NON-WESTERN ARTS
Tracing a complete world art history, Fine Arts Paris & La Biennale will bring together specialists in Antiquities, Tribal Art, Asian Art and Islamic Art. A Roman Marble head of Aphrodite, second century A.D. will be one of the highlights presented by Kevorkian, a third-generation Parisian dealer specialising in Islamic Art. They will be joined by Kent Antiques, a prominent London gallery dealing in Islamic and Indian art, Orientalist paintings and courtly objects which will present an important Iznik blue and white pottery tile decorated with Saz leaves and khatai blossoms made in the Ottoman Empire, circa 1545-1550.

In addition, the fair will be distinguished by a roster of Tribal Art galleries, led by Belgian African art expert Didier Claes and Oceanic art specialist Anthony Meyer. Visitors will be able to admire a 19th-century Dogon mask from Mali in the booth of Barcelona dealer Montagut, while the Parisian galleries Monbrison, Flak, and Belgian art dealers Mestdagh will impress with a display of artifacts from Oceania, Indonesia, Africa, India and Japan.

RARE BOOKS & PRINTS
A great drawing or painting is not always found in a frame, as demonstrated by the selection of rare books, manuscripts and prints in the fair. The fourth-generation Parisian Print dealer Prouté will present a 16th-century woodcut by Albrecht Dürer depicting the Christ in limbo. They will be joined by Frankfurt specialists in Old Master Prints Rumbler; London dealer Daniel Crouch, a world authority in the field of rare atlases and maps and an outstanding group of book specialists whose expertise spans the 15th through the 20th centuries. These include young gallerist Camille Sourget, fourth-generation book specialist Stéphane Clavreuil and Parisian expert Jean-Baptiste de Proyart.

JEWELLERY
Finally, breaking the boundaries between fine and decorative arts, the new fair will also celebrate jewellery as a form of art. Renowned dealers in antique jewellery (Bernard Bouisset, Orpheo Genève, Martin du Daffoy, Larengregor) will be joined by contemporary artist/jewellers Walid Akkad, Frédérique Mattei and Chinese designer Feng J. A year after one of her masterful creations entered the collections of the Musée des Arts Décoratifs in Paris, Feng J will uncover spectacular new designs especially made for the fair. These include a masterpiece of jewellery craftmanship inspired by the artist’s passion for the impressionist period: a diamond tiara whose various pastel tones are reminiscent of a Monet painting.

The fair will be accompanied by a series of cultural events organised in partnership with Paris museums, as part of the French capital’s Semaine des Beaux Arts (“Fine Arts Week”).