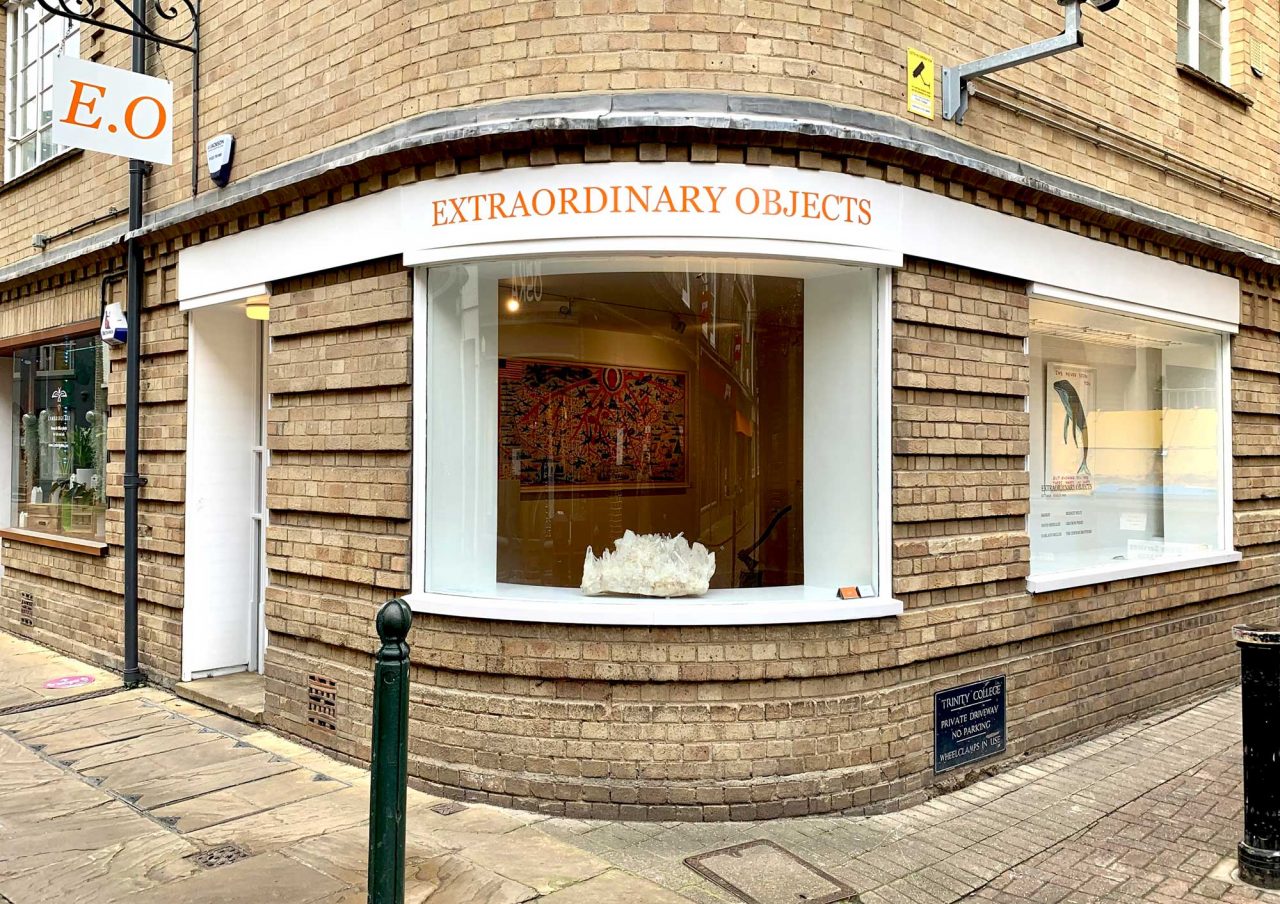 From a 68-million-year-old dinosaur skull, to Banksy sculptures, the Extraordinary Objects collection celebrates curiosity and adventure, displaying modern masterpieces alongside rare fossils and minerals. There is no specific genre or time period that defines the collection; every piece is chosen for its extraordinary nature and the sense of wonder it invokes.

Extraordinary Objects was founded by Carla Nizzola, who has over a decade’s experience in the art world. An artist herself, Carla also managed one of London’s leading contemporary galleries for seven years, before deciding to follow her passion for curation. Extraordinary Objects was born out of Carla’s life-long passion for collecting art, natural history, antiques and curiosities.

Carla comments: “I am so pleased to finally open Extraordinary Objects in the eclectic city of Cambridge. The gallery is, in essence, an extension of my own personal collection; I believe works from different genres have an extraordinary way of complementing and elevating each other and fossils, antiquities, and minerals have always been displayed alongside contemporary artworks in my home. Each object has a unique and compelling story and watching people being blown away when they first see a piece in the collection is, for me, the best feeling. Already we have had collectors come in to buy a contemporary painting but leave with a piece of 4.5-billion-year-old meteorite. You never know what will ignite your curiosity.”

Extraordinary objects currently on display include X Escif – Axe, 2019 by Banksy, created in 2019 as part of Banksy’s Gross Domestic Product collection, a rare collaboration between Banksy and Spanish street artist, Escif. The sculpture depicts an axe stuck into a piece of wood, with a flower growing from its handle. The piece is currently on consignment from a private collector and is not for sale, giving visitors the chance to view work from one of the world’s most famous artists in the flesh.

Also on show is Flower Thrower, 2003 by Banksy, one of the artist’s most iconic works. Also known as Love Is In The Air, the piece has been a topic of controversy since it first appeared in 2003, as a graffiti piece in Bethlehem, on the 760km West Bank Wall that separates Palestine from Israel. Banksy himself has described the wall as essentially turning “Palestine into the world’s largest open prison”. The graffiti depicts a man appearing to throw flowers at someone in rage; he is said to represent a rioter, however the flowers signify hope for peaceful resolution of conflicts.

Displayed in Extraordinary Objects is a triptych of the ‘Flower Thrower’, one of 100 signed limited edition screen-prints ever made, which has also been framed by Banksy. Also on show:

Taking visitors back to the Mesozoic Era, Ed is a fossilised Edmontosaurus dinosaur skull from the Hell Creek Formation in Montana, USA. It lived approximately 68-million years ago, and was one of the last known surviving species of dinosaur, with a slight resemblance to a platypus and a herbivore creature. To piece together Ed in the form it is today, archaeologists and palaeontologists have spent thousands of hours excavating and studying its history. Part of Ed’s vertebra bone is also on display in the gallery.

A glimpse of space in the heart of Cambridge, Cari is a piece of meteorite, approximately 4.5 billion years old and estimated to have impacted Earth around 4,200-4,700 years ago. Cari is a Campo del Cielo meteorite, a group of iron meteorites that were found 1000km northwest of Buenos Aires, Argentina, between the provinces of Chaco and Santiago del Estero. In Spanish, “Campo del Cielo” translates to “Field of Heaven”. Cari is almost pure iron and weighs approximately 35kg – it is believed that this meteorite is among the heaviest single pieces of space rock to impact Earth.

The American Dream portrays a map of the US inspired by Grayson Perry’s tour of the country when filming his Channel 4 series, Grayson Perry’s Big American Road Trip. The map has been described by Perry as being a portrayal of America’s extreme version of the online culture war; with Mark Zuckerberg illustrated as a Big Brother-like figure at the top of the piece, Perry highlights the negative impact of social media on society and perceptions of politics, race, climate change and sexuality. The 110cm x 240cm picture in Extraordinary Objects is a colour etching from three plates on one sheet, is from an edition of 68, and is signed by the artist.

To visit the gallery on Green Street, Cambridge, book an appointment with Carla on +44(0)7739 002 759. Browse the Extraordinary Objects website at www.extraordinaryobjects.co.uk and follow @ExtraordinaryObjectsUK on Instagram.