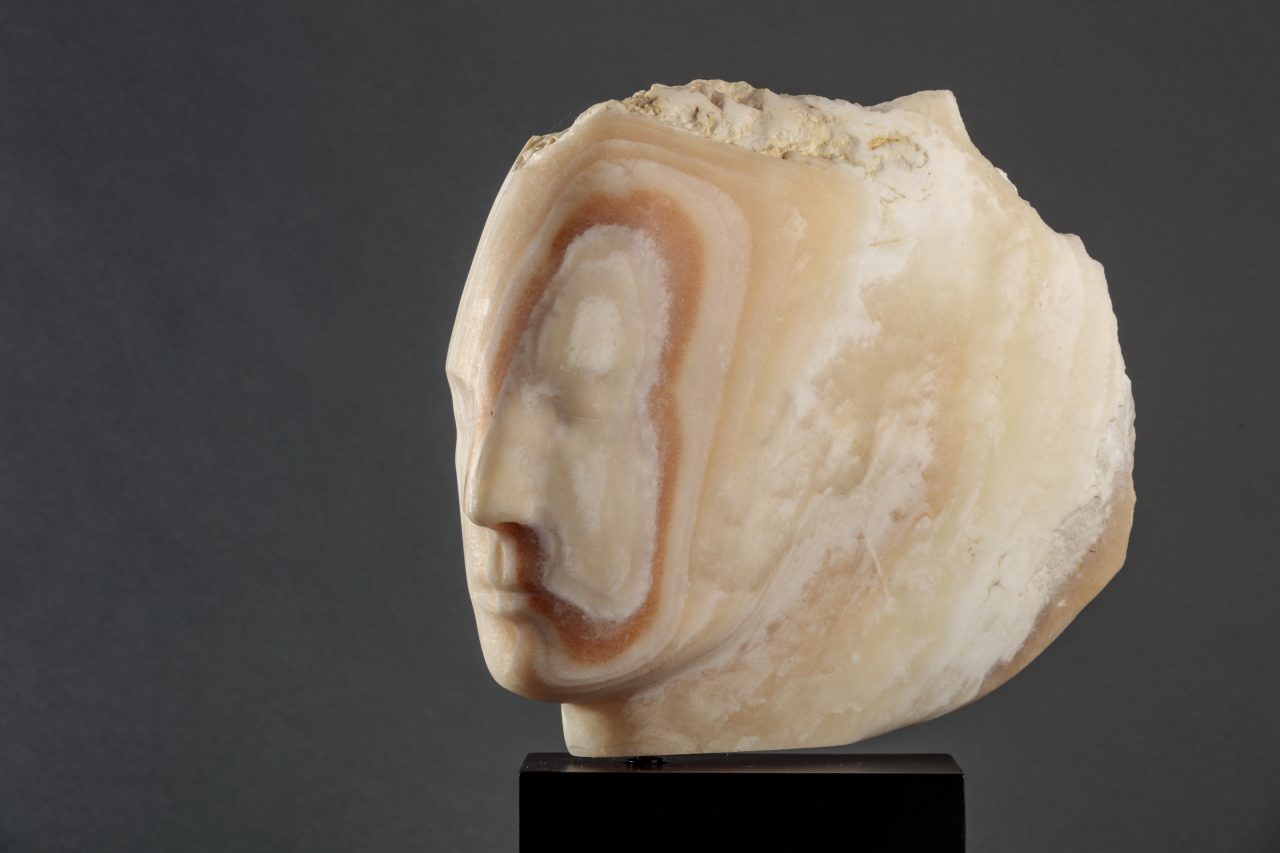 This Frieze month, TOMASSO and Willoughby Gerrish are to present a curated exhibition of works by Emily Young alongside sculpture from the Classical to the Neoclassical.

Her work primarily focusses on changing perceptions around the environment. Her last big project, Weeping Guardians, entailed her creating several 12 tonne statues with beautifully carved faces and then lowering them on to the Tuscan sea floor in order to prevent illegal trawling along the coastline. (Top of page – Emily Young, Janus Cloud, 2020, Onyx)

Emily comes from a background of explorers, artists, and creatives such as her grandmother Kathleen Scott, the famed sculptor who studied alongside Rodin in Paris, and her father Wayland Young, a Labour minister who helped set up the Department of Education.

The first physical cultural traces of our hominin ancestors can be found in tools made of worked stone. Evidence of these worked stone tools date back some 3.3 million years. They were unearthed from the shores of Lake Turkana in Kenya.

Since then, over those millions of years, humankind’s cultures and our relationship with the planet can be most clearly seen through the enduring material of stone. Any organic traces of manufactured objects soon disappear as they degrade back into nature. Both in terms of objects and later, architecture, we can achieve some understanding of ancient cultures, or, at the very least, some connection. The stories that have survived from more recent stone remains are not so different from our more thoughtful contemporary preoccupations: our survival, and our origins – and the desire to understand the source of the power/s that guide the universe we see around us.

In Greece, around three and a half thousand years ago, the European project of evidence-based science and logic began. The natural world became the subject of study, as did the nature of our humanity. Philosophy, logic and mathematics flourished. The first anatomically correct sculptures of humans and animals were born in this period. To understand a thing was to have some power over it. The study of the natural world, definitions of classes of entities based on observation and evidence, of types of thinking, of modes of being, of philosophies as ethical and reasonable life choices, all these were born then. The works carved in stone were probably the most skilled ever to be produced. In other parts of the world similar exceptional ways of thinking were manifested in stone, Buddhist sculptures for instance.

A stone carver can put into the working of the stone their thoughts, questions, dreams. Those carvers from history, across the globe, with skill and poetic justification, live on with us now, telling us elements of their thoughts, questions and dreams. Carved stone manifests the purposes of art, of poetry, in cultures around the world throughout human history. Stone endures. It can hold beauty for us.

Emily Young is ‘Britain’s greatest living stone sculptor’ (Financial Times). She was born in London in 1951 into a family which included writers, artists, politicians, naturalists and explorers. Her grandmother was the sculptor Kathleen Scott, a colleague of Auguste Rodin, and her uncle Peter Scott, started the WWF in 1961.

As a young woman, she worked primarily as a painter, studying briefly at Chelsea School of Art and Central Saint Martins in London, and Stonybrook University, New York. She left London in the late 60s, and spent the next years travelling widely, studying art and culture. In the early 1980s she started carving in stone, preferring to use discarded materials from abandoned quarries. The primary objective of her sculpture turns out to be to bring humankind and the living planet into a consciously closer conjunction. Our relationship has been clouded over time by millennia of fantasies about the nature of power and human privilege over nature.