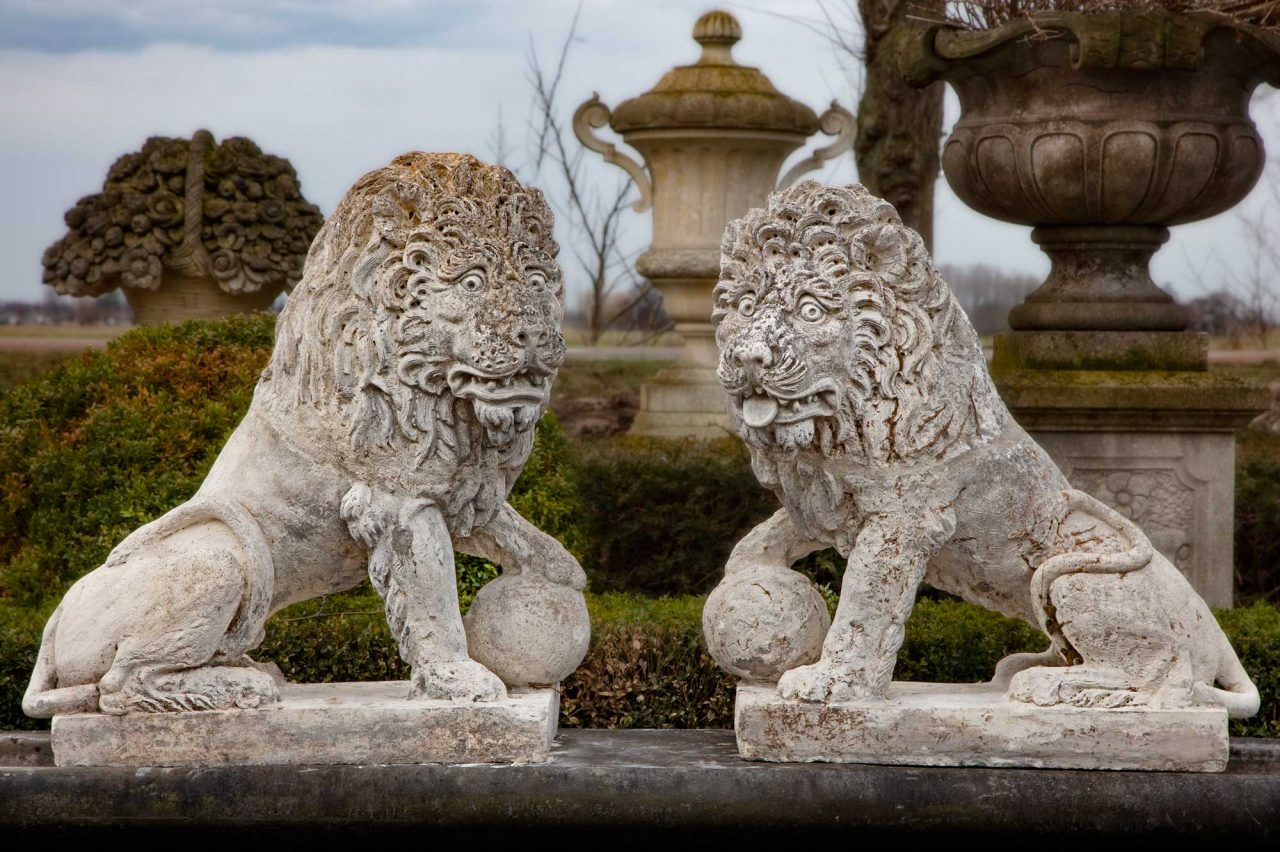 A limestone carved Medusa fountain commissioned by Gianni Versace is one of the many unique items being offered in a special sale of garden statuary and ornament from the world-renowned collection of Piet Jonker. It has been six years since the last auction from the Jonker collection, in which time Piet Jonker has carefully added to his curated collection. The stunning ornamental and sculptural works are housed on the 18th country estate of De Lindenhoff, near Abcoude in the Netherlands. The sale will be  held via a live stream to the auctioneer at Dreweatts of Berkshire on Thursday, May 6th, 2021.

See also: Under the Hammer – a Unique Private Collection of Pianos 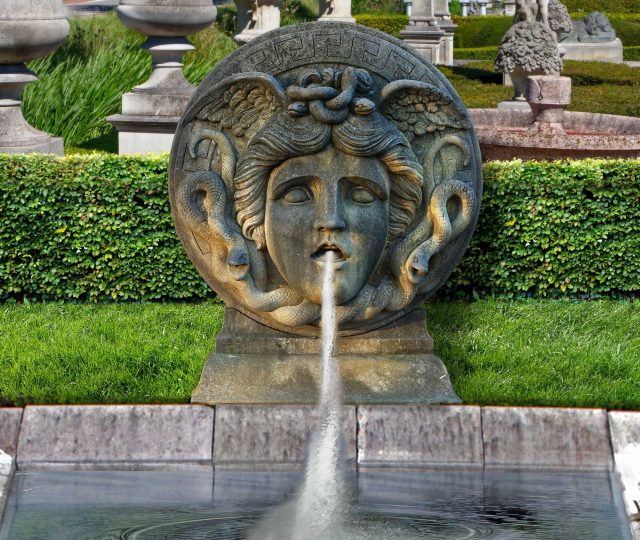 The Versace wall-fountain designed as the head of Medusa, the iconic symbol of the Versace brand, was commissioned by the late fashion designer, but never delivered due to his untimely death. The fountain was one of a pair commissioned by Versace for his Miami Beach home, Casa Casuarina, one of which was delivered and the second never sent, due to his death. The symbol of Medusa was chosen as the Versace brand’s logo as it represents philosophy, beauty and art.

The 20th century continental sculpted limestone wall-fountain is carved in high relief, with the head of Medusa, her hair with coiled serpents and protruding wings, her open mouth forming the water spout. The dramatic and stunning sculpture is raised on a rectangular base and estimated to fetch £7,000-£10,000 when it goes under the hammer.

Commenting on this extraordinary sale, Ashley Matthews, Dreweatts specialist in charge, said: “It is such a pleasure to present a collection of such quality and variety. The sale offers a wonderful opportunity to obtain a stunning piece of Piet Jonker’s personally curated collection and because of this, I’m sure it will draw interest from around the world.”

Each piece in Jonker’s collection is specifically chosen for its quality, aesthetic beauty and history, with many pieces having a wonderful story behind them. Amongst the highlights is a pair of bronze greyhounds inspired by John Francis’ model of The Greyhound Eos, produced in circa 1848, which stood on the terrace of the Italian Gardens at Osborne House on the Isle of Wight, a Royal residence until the death of Queen Victoria in 1901, when it was given to the state by King Edward VII. As Royal works this pair were recreated with the gracious permission of Her Majesty the Queen. 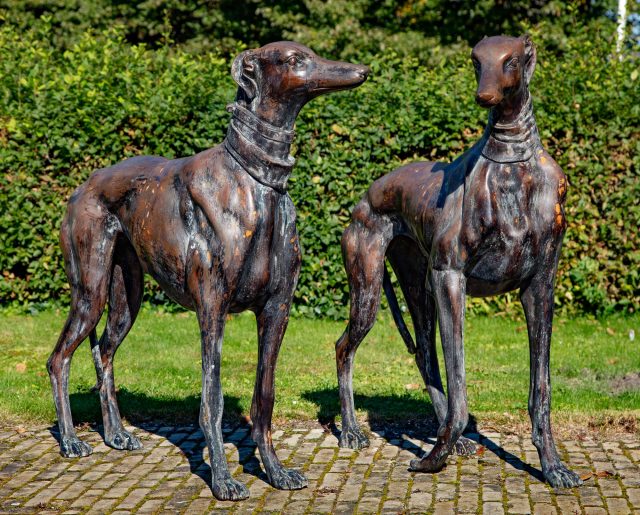 Francis’ model was based on a painting of the greyhound Eos by Sir Edwin Landseer (1803-73), which inspired the Osborne House version, as well as the one for Windsor Home Park. Interestingly Prince Albert is known to have worked on the sculpture himself, alongside the sculptor John Francis. In her diary entry for 1st November 1844, Queen Victoria wrote: “…we walked down to the Kennels, where Francis is getting on with the model of good ‘Eos’, which is very good and like. Albert directs everything, and also works himself at it.” (Francis’ model is illustrated in John Davis, Antique Garden Ornament, Antiques Collectors’ Club, 1991, p. 150.) The pair is estimated to fetch £7,000-10,000.

Continuing on the canine theme is a charming pair of 20th century sculpted limestone models of reclining hounds, each portrayed looking straight ahead and with their forelegs and paws outstretched. Dating from the 20th century and grandly sitting on rectangular plinths, they are estimated to fetch £6,000-£9,000.

A spectacular pair of 20th century sculpted lions, after Antonio Canova (1757-1822) (seen top of page) depicts them lying stretched forward, with their paws crossed at the front and is enhanced by them lying on integrally carved rectangular socles (rectangular stone blocks). They are perfectly described by Piet Joker: “These lions have the most powerful expression I have ever seen. They are made with great craftsmanship by the sculptor. He has managed to capture his own free, artistic way of thinking in this sculpture. This is not just a copy of the Canova lions, but the sculptor was able to add something to them of his own, which is what makes them very special.”

When Pope Clement XIII died in 1769 he was laid to rest in the Vatican, but Senator Abbondio Rezzonico (the nephew of the late pontiff), commissioned the sculptor, Antonio Canova to create a more fitting tomb for him in St Peter’s. The work, which included Canova’s lions were completed in marble in 1792 and the late pope’s remains were moved to the new tomb. This version of the lions, beautifully crafted in limestone, is estimated to fetch £20,000-£30,000.

An impressive 18th century limestone standing figure of Mercury is from the circle of Ignatius van Logteren (1685-1732) and after Michel Anguier (1612-1686). It depicts the God standing and ‘heroically nude’ except for drapery around his midriff. His petasos helmet is worn back on his head and a cockerel sits beside him on a rectangular section base.
. 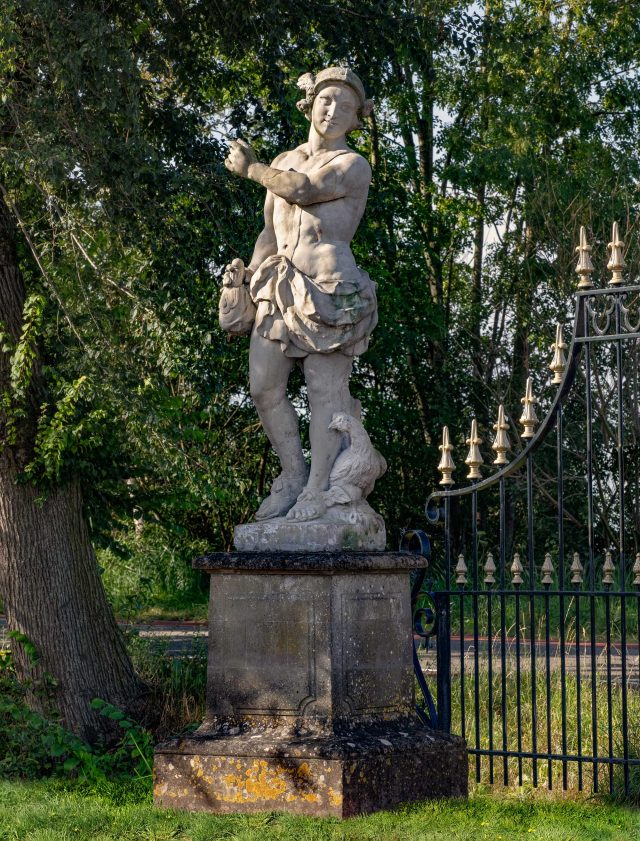 Mercury, the messenger of the Gods, recognisable by his petasos (winged helmet), caduceus (staff) and winged sandals, was also associated with trade and commerce. He was the patron God of financial gain, eloquence, communication, travellers, boundaries, luck, trickery and thieves, as well as being the guide of souls to Hades. In this group his association with a cockerel marks him as the Herald of the New Day. Standing on a limestone square section plinth, the figure is estimated to fetch £35,000-£45,000. 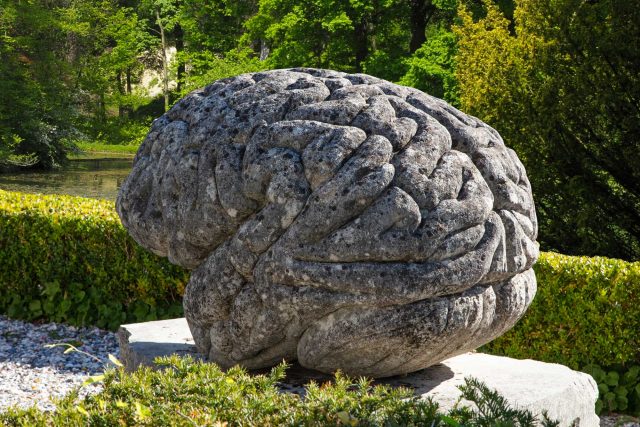 A unique limestone 20th century sculpture of a human brain is Piet Jonker’s favourite piece in the sale. It was purchased by him directly from a private collection, where is stood for many years, having been a special commission. It was created by Italian sculptor Massimo Sarantonello and is naturalistically modelled with distinct cerebral cortex detailing. This huge statement piece is estimated to fetch £10,000-15,000.

All images courtesy of Dreweatts.

The Other Art Fair Goes Virtual in the USA