David Bowie’s image was as much a part of his art as was his music. In a luxurious new book, photographers including Terry O’Neill capture images of the rock icon

Many of us will have experienced a ‘WTF?!’ moment on first seeing David Bowie performing on Top of the Pops in 1972. In his Ziggy Stardust persona, eyebrows shaved and perversely androgynous, he seemed to be not only a new thing, but also different in a way few performers could claim to be.

But novel though his appearance was, he proved to be no artistic flash in the pan. Arguably the first musical artist to constantly reinvent himself though revising his image, Bowie proved to be as much a visual icon of the 70s, 80s and 90s as he was a musical innovator. Now, all that glam has been captured in a spectacular book published by ACC Art Books. David Bowie: Icon, edited by Iconic Images and with an introduction by Bowie’s long-time friend and collaborator George Underwood, collects the work of 25 photographers who captured Bowie at his mercurial best, from obscurity to mega-stardom.

The most significant collection of David Bowie images ever assembled, this luxurious opus is published to coincide with the fifth anniversary of Bowie’s death. It captures everything from studio portraits and live performances by top photographers, to images from marketing campaigns, online promotions and events such as on-stage Q&As and book signings.

The images are accompanied by personal essays and reflections about working with this astonishing artist, from memories of the earliest days at the Arts Lab in Beckenham to what it was like touring the world with Bowie. Rarely seen private moments and candid snapshots make this collection at once powerful, sentimental and inspiring.

But it’s Bowie’s school friend and long-time collaborator George Underwood who can take responsibility for one of the Thin White Duke’s most notable features, his dilated pupil. As 15-year-old boys, who had known each other since joining Cub Scouts in Kent, the pair came to blows over a girl in a disagreement which had a long-lasting legacy. Underwood said in an interview: “I was so aggrieved I walked over to him, basically, turned him around and went ‘whack’ without even thinking.” Bowie’ aniscoria – permanent dilation of the pupil – was the result. It didn’t stop the two staying friends, and indeed when George Underwood became an artist he designed the record sleeves for Hunky Dory and The Rise and Fall of Ziggy Stardust and the Spiders from Mars.

George Underwood says in David Bowie: Icon: “There are no photos of us as young teenagers strutting along Bromley High Street trying to impress any of the girls that happened to be passing. We were so bloody vain. Not many people took photos in those days. There’s very few around…. David had decided that whatever he was doing, he wanted to look good while he was doing it. He certainly succeeded. Photographers loved him. He would surprise them with his outfits, his hairstyle, his expressions. I was lucky enough to be invited onto the 1972 ‘Ziggy’ tour of America. That was a visual banquet if ever there was one. Seeing Mick Rock in action was quite extraordinary…”

Mick Rock it was who captured some of the most iconic images of Bowie, including behind-the-scenes moments with Iggy Pop and Lou Reed. A writer and film-maker as well as a photographer, Rock’s work has been exhibited in galleries and museums worldwide. He says of Bowie: “I experienced David Bowie above all as a piece of living artwork, constantly modulating and mutating like a series of startling reflections in a cracked mirror. He was fascinating: Ziggy Stardust was a new breed of rock ’n’ roll operative, a rogue hitman with his own agenda, a post-modern heartthrob with destiny on his mind, a dreamer of Dada with glitter in his soul. He was the Scarlet Pimpernel in fabulous drag. He was what the times needed and a whole lot more.”

Another long-lasting collaborator was Masayoshi Sukita, who came to London in 1972 with the intention of photographing T-Rex’s Marc Bolan, and ended up working with Bowie over 40 years. He says: “It started in 1972 in London. After that, in 1973 I shot him in New York and met him in Tokyo later that year when he arrived for his first Japanese tour. In 1977 David Bowie came to Tokyo again, with Iggy Pop. They asked me to take photographs in a quick, hour-long session but I didn’t know at the time that the shoot would end up on David Bowie’s album cover of Heroes. It was a very private session that I’ll always remember.

See also: The Beatles, Jimi Hendrix and Mick Jagger: Records and Rebels of the 1960s

“I shot him in 2009 when I took his last official portrait. Whatever was happening to David in his personal life, he never showed it in front of the camera. His strength and humility always shone through in images, that was the bottom line, and it’s something that I will always remember.”

One of the most notable contributors to David Bowie: Icon is Terry O’Neill, who died in 2019. After working with Bowie in the ‘70s and ‘80s, he says in the book: “It was decades later, in the 1990s, that I received a call from an old friend. David wanted to know if I was available to take some straight-ahead portraits for a magazine interview. I hadn’t seen him in years and was surprised when he walked into the room. “Yes, we were both much older, it was a bit more than twenty years in fact since the first time we had met at the Marquee. He looked terrific – still tall, a bit lanky, but no longer a pale boy. The person in front of me was now an award-winning musician, actor, activist and had lived through, thrived and survived those heady days of the 1970s. He was really at ease with himself. This wasn’t a character this time, no tricks to hide behind; this was just David, and he was happy with that.”

The work of Terry O’Neill was itself celebrated in a selling exhibition at Sotheby’s in November; Terry O’Neill: 60 Years of Iconic Portraits. O’Neill photographed the frontline of fame for over six decades. A World War II baby, he began his career at the birth of the 1960s, chronicling the emerging faces of film, fashion, art and music, those who would go on to define the Swinging Sixties and beyond.

No other photographer has embraced the span of fame, capturing the icons of our age from Winston Churchill to Nelson Mandela, Frank Sinatra to the Beatles, and Audrey Hepburn to Amy Winehouse. The Sotheby’s collection showcased 26 seminal images, charting O’Neill’s legendary career. Jackie Gunn, Director Sales & Exhibitions for Iconic Images, said: “Iconic Images is honoured to work with Sotheby’s to bring together the largest collection of works by the late Terry O’Neill CBE for the first time in the UK since he sadly passed away last year. The prints on offer, sourced directly from the artist’s archive, show the breadth and depth of Terry’s career which spanned over sixty years.

“It is an all-star line-up from his archive covering music, film, fashion and politics, including the debut of one of O’Neill’s most famous and sought-after work, Frank Sinatra, Miami Boardwalk 1968 as a platinum 30”x40” print. This edition was one of the last that Terry signed in 2019. He was immensely proud of this photograph and would have been delighted to see it offered for the first time with an institution as august and steeped in history as Sotheby’s.” 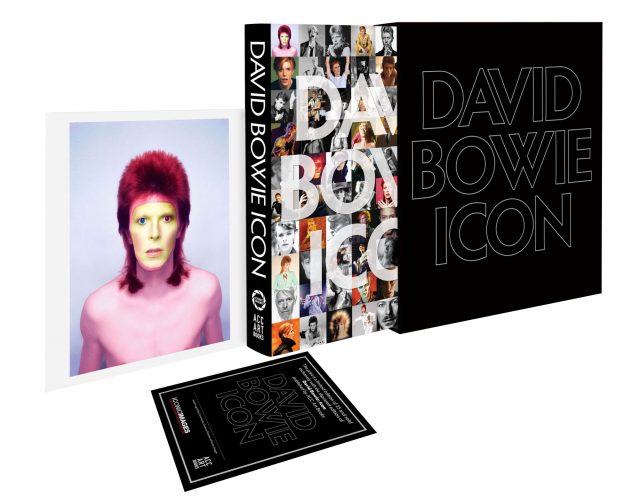 David Bowie: Icon is available from ACC Art Books in hardback at £50. See www.davidbowieicon.com for 20 limited editions packaged in a slipcase with certificate of authenticity and print hand-signed by photographers including Mick Rock, Lynn Goldsmith and Sukita. 

If you enjoyed our feature on David Bowie: Icon Captures the Star Man’s Unique Image then see our Arts & Collections magazine where he is featured on the front cover.

How Whisky Could Pay For Your Future