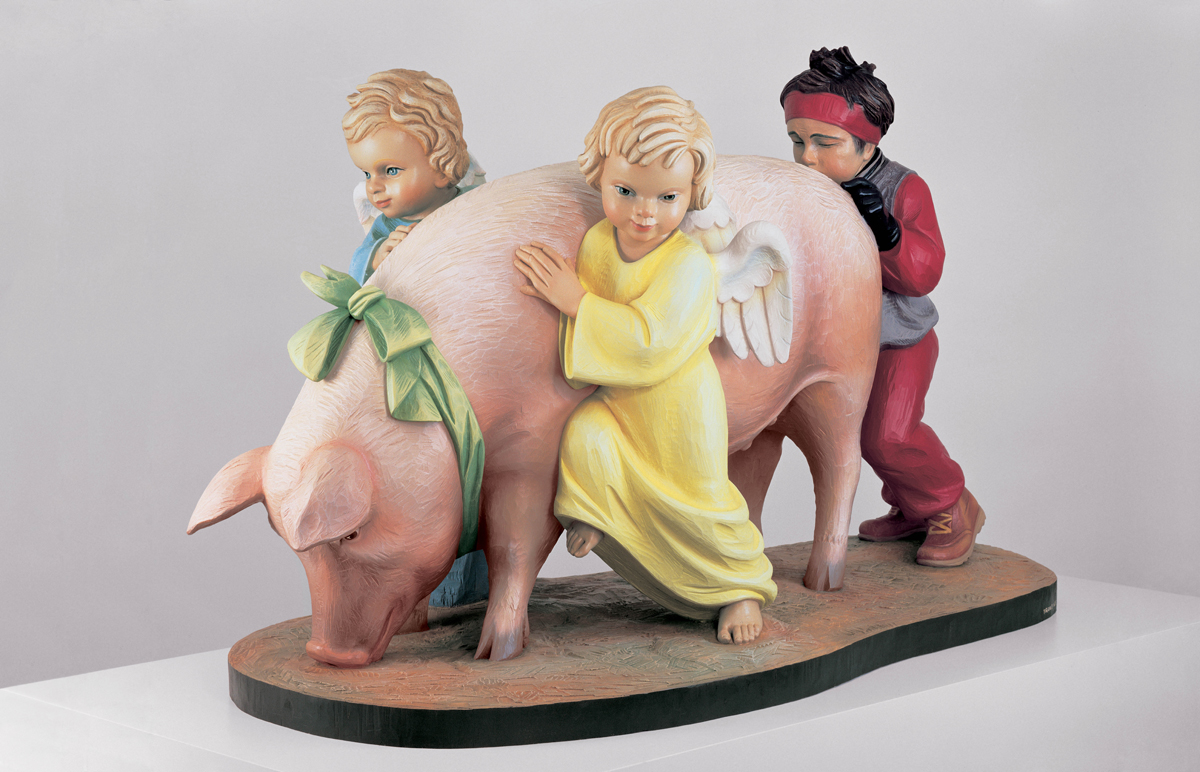 A comprehensive exhibition of the work of controversial American artist Jeff Koons is at the Ashmolean Museum, Oxford, until June 9th.

Koons himself together with Sir Norman Rosenthal curated the exhibition, which features 17 works, 14 of which have never been shown in the UK. They span the artist’s entire career and his most well-known series including Equilibrium, Statuary, Banality, Antiquity and his recent Gazing Ball sculptures and paintings.

Koons is widely known for his iconic sculptures Rabbit and Balloon Dog as well as the monumental floral sculpture Puppy (1992), shown at Rockefeller Center and permanently installed at the Guggenheim Bilbao.

According to not entirely reliable legend, Koons, born in 1955, worked on Wall Street and in museums before bursting onto the contemporary art scene in the 1980s with ‘Neo-Pop’ works strongly influenced by Andy Warhol. His works draw heavily on images appropriated from both popular culture and classical art – he uses unadulterated ‘found objects’, makes painstaking replicas of Old Masters, and recasts pop images as sculptural forms. In 2013 his Balloon Dog (Orange) became the most expensive work by a living artist when it was sold for $58.4m (then around £36.7m) – a record which stood until last November, when a David Hockney painting sold for $90m (£70m).

Dr Alexander Sturgis, Director of the Ashmolean, says: ‘In showing Jeff Koons at the Ashmolean, the world’s oldest public museum where the collections range from prehistory to the present, this exhibition provokes a conversation between his work and the history of art and ideas with which his work engages. I am sure it will also provoke conversations among those who see it.’

The Ashmolean exhibition includes important works from the 1980s with which Koons made his name through the novel use of the readymade and the appropriation of popular imagery: One Ball Total Equilibrium Tank (Spalding Dr. J 241 Series) (1985); Rabbit (1986); and Ushering in Banality (1988). It also explores Koons’s more recent focus on the art of antiquity and the western art canon where layered images of ancient and modern art meet in Koons’s singular vision. Among the highlights are the spectacular Balloon Venus (Magenta) (2008–12). While evoking the tiny Ice Age ‘Venus of Willendorf’, one of the world’s oldest works of art, Balloon Venus (Magenta) is made with Koons’s signature motifs: monumental scale; the inflated balloon with its intimations of transience and mortality; and the flawless mirror-polished surface which positions the viewer in the work.

In his Antiquity paintings (2009 onwards) Koons creates thrilling, layered collages. Photo-realist reproductions of classical sculptures (of Venus, Pan and Priapus) are set against broken collages of other artworks or dazzling abstract backgrounds, overlaid with graffiti-like marks. In more recent works, Koons has explored what he calls his ‘cultural DNA’, using sculptures and paintings from world-famous collections, meticulously painted replicas of European masterpieces, and museum-style plastercasts of mundane objects such as mailboxes and birdbaths.

Tickets for the Ashmolean exhibition at the John Sainsbury Exhibition Galleries are £12.25/£11.25 concessions, and can be purchased at the museum or online at www.ashmolean.org. The exhibition is accompanied by a fully illustrated catalogue at £15.