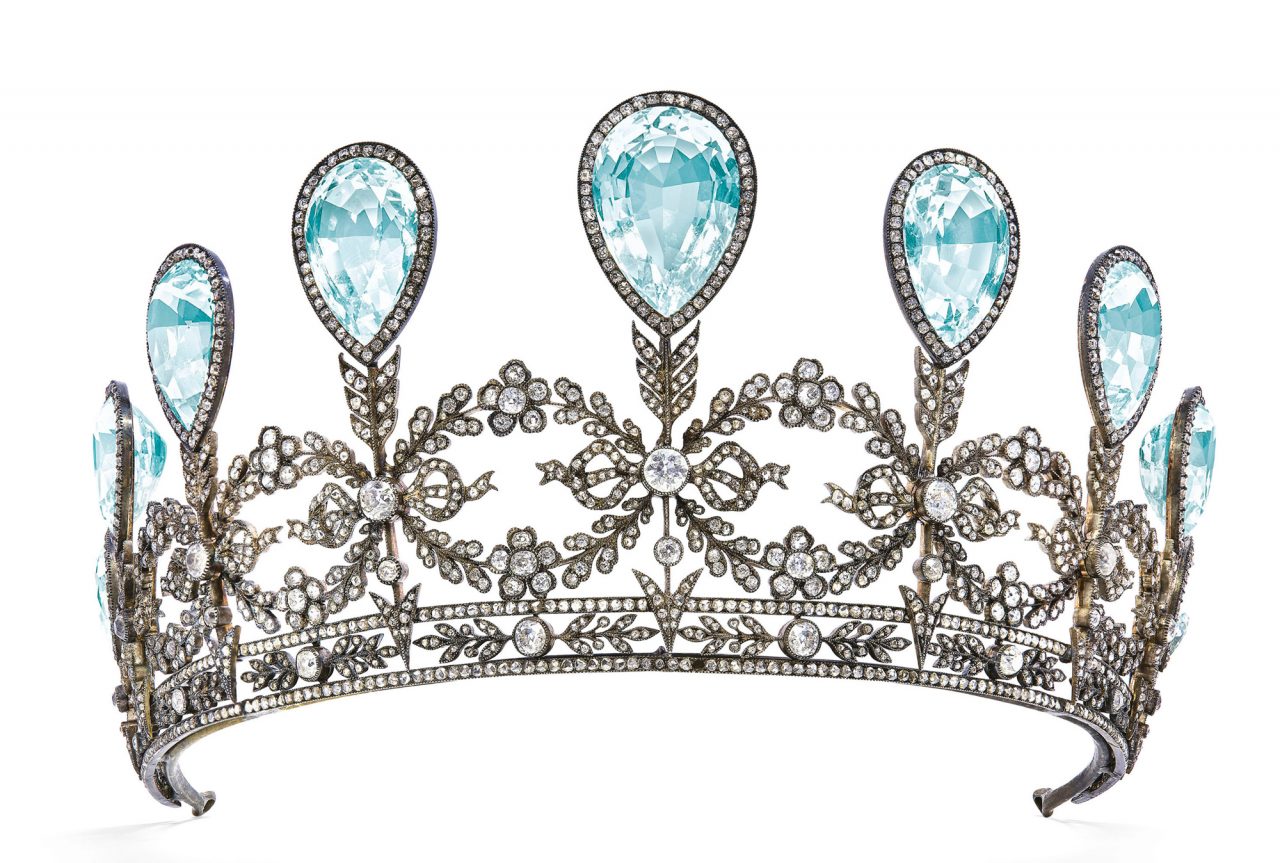 Christie’s Magnificent Jewels auction in Geneva on 15th May 2019 offered a superb selection of pieces, many of which, including a Russian Imperial Emerald, achieved well over their estimates.

The second largest stone in the collection of Catherine the Great (1729-1796), the emerald passed through the collections of Tsars and Grand Dukes until it became the property of John D Rockefeller Jr. and other private collectors.

This pear-shaped emerald is not only an extraordinarily beautiful stone, with a saturated brilliant green colour and amazing purity, a rarity gemologically for an emerald of 75 carats, but it is unique for its imperial provenance, reflecting the splendour of the Romanov dynasty, and a rare gem to survive the Russian Revolution.

Consisting of nine graduated pear-shaped aquamarines, cushion and rose-cut diamonds, this tiara was a wedding gift from Frederick Francis IV, Grand Duke of Mecklenburg-Schwerin to his bride Princess Alexandra of Hanover and Cumberland. His mother Grand Duchess Anastasia Mikhailovna of Russia, a keen Fabergé collector, encouraged the Grand Duke to marry young and the wedding was scheduled for June 1904 when Frederick was 22 years old and Alexandra, 21.

On 7 June 1904, the day of the wedding, Princess Alexandra wore the traditional Hanoverian nuptial crown. The diamond-set coronet that had been in her family for more than a century was commissioned in 1761 for the wedding of King George III of England and Queen Charlotte of Mecklenburg-Strelitz. Her own special wedding gift from the Grand Duke was to follow a month later. During the Court Ball organized by the city of Schwerin on 8 July, Princess Alexandra was recorded wearing a pink silk dress with pearl necklaces and an aquamarine tiara.

Perhaps surprisingly, the item achieving the highest bids at Christie’s magnificent Jewels in Geneva was a relatively modest-seeming ruby and diamond Harry Winston ring, ‘the property of a princess’. The cushion-shaped ruby of 22.86 carats originating in Burma, with half-moon diamonds, on a platinum ring size signed ‘Winston’, achieved CHF 7,198,500 (£5.6m) on an estimate of CHF 2,000,000 – CHF 3,000,000 (1.5m-£2.3m).

Described as “an encyclopedia of the finest jewellery, with lots ranging from a late 19th century Tiffany & Co. emerald and diamond necklace to an important collection of modern Cartier pieces, alongside our selection of retro jewels from the 1940s to the late 1950s”, the auction achieved a total of CHF 81,620,500 (£64m).