What better treasure to leave behind than to restore an ancient vineyard, to propagate unique biodiversity, to renovate a historical site, and to leave it all better for the next millennium than it was entrusted to you?

With a motto of “Non Mihi, Non Tibi, sed Nobis” (Not mine, not yours, but ours), Chêne Bleu is a winery rooted in collaboration, with a view to creating a legacy built on the connections between Nature, History, Philosophy, Thought Leadership, Science and Art.

Once a remote forgotten vineyard on a derelict medieval priory in the southern Rhône, the La Verrière estate was purchased in the 1990s by former head of the London Stock Exchange, Xavier Rolet, and his wife, Nicole, now Principal of the winery. Enamoured with the potential of the very special vineyard, their aim was to grow a dynamic, innovative and thoroughly modern winery that also remained faithful to its unique natural environment and terroir, at the heart of the UNESCO biosphere of Mount Ventoux, which boasts 1,200 species just of butterflies. They also set about transforming the ninth-century buildings into an eco-luxury holiday accommodation, then set up a wine school and a think-tank, Fine Minds for Fine Wines.

An Assemblage of the Arts

As a tribute to the estate’s medieval past, they named the award-winning flagship reds Abélard and Héloïse, after the 12th century thinkers-turned-lovers, France’s Romeo and Juliet. This also inspired the whimsical medieval-meets-modern which adorns the wines’ distinctive labels. At the centre of the image, the emblem of the winery, a unique blue oak (or chêne bleu), in reference to the tree which grows at the heart of the estate and gained its unique colour after treatment with bouillie bordelaise, a blue-green solution used to protect organic vineyards. It contains hidden symbols such as references to Picasso, Raphael, Voltaire, Cicero, Hieronymus Bosch and a secret scavenger hunt.

Chêne Bleu also nods to contemporary art in its collaboration with prestigious wine collection, Pont des Arts, whose labels marry limited-release fine wines with beautiful artwork created by iconic artists. The most recent cuvée, launched at the end of 2019, was one of the last wines to which the late Château Margaux’s iconic director, Paul Pontallier, leant his celebrated palate. The bottle is adorned with the angular forms of Piet Mondrian’s now-iconic three-colour work; Pontallier’s son and co-founder of Pont des Arts, Thibault, explains this fitting connection as “Mondrian did things differently, and he was a pioneer; this is what the Rolets are doing here in the Ventoux.”

Pioneering sustainable winemaking in the South of France, with their family and top scientists, the Rolets developed a maverick approach to viticulture that combines cutting edge organic, biodynamic and sustainable principles. Their work in biodiversity supports surrounding fauna and flora.

To further its commitment to nature, at the end of 2019, Chêne Bleu set up a crowdfunding campaign – the SustainaBEElity Initiative, focusing on its ongoing work with bees. The apiary was first set up shortly after the property was purchased by Xavier, who first developed a passion for beekeeping as a teenager. The proceeds of the crowd-funding campaign will now fund a range of programmes supporting bees and biodiversity at the property, including purchasing new beehives; a study on bees and their impact on biodiversity and winemaking; and “BEE-o-Diversity” educational tours for visitors and guests staying at La Verrière.

Working with local and international scientists, Chêne Bleu will then apply the relevant scientific discoveries and tested knowledge from two decades of winemaking to develop a practical roadmap for other vineyards looking to break away from using artificial chemicals in their vineyards. The outcomes of the study will be developed with the UNESCO scientists of the Mount Ventoux Nature Reserve and shared with other winemakers, as well as a community of like-minded supporters – whether their interests are in improving our ecosystem, promoting biodiversity, or in the essential role that bees play in sustainable viticulture. 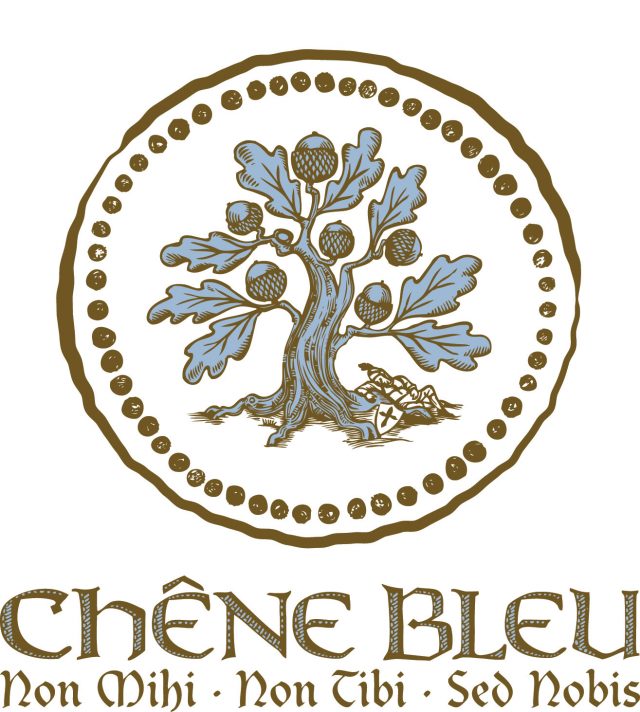 The estate was just shortlisted for the World Grand Trophy for best Wine Tourism Destination to be announced later this year. Guests can stay on-site at La Verrière, as a B&B or rent it in entirety, host a celebration, attend the top-rated Extreme Wine course, or just come for a Chêne Bleu wine tasting. Visitors can also enjoy a ‘Chenobox’ (fresh local specialities served in a Bento box) – a gastronomic garden-to-table meal by Victor Guerin, a talented young Michelin-star trained chef who has worked in Japan. Visitors can learn to their heart’s content about wine, winemaking, food, bees and sustainability.