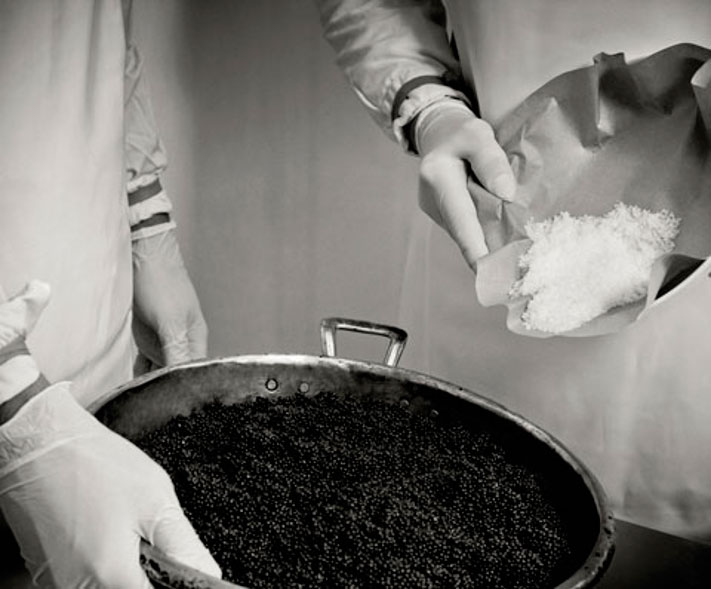 Caviar is basically the fresh and only slightly salted roe of the female sturgeon. The sturgeon is a prehistorical migratory fish that has roamed the cold waters of the northern hemisphere for over 250 million years. Depending on the type of sturgeon, size and weight can vary. Some types (e.g. Huso Huso ‘Beluga’, Acipenser Transmontanus) can grow to over 1980 lbs, while others (e.g. Russian sturgeon, Siberian Sturgeon) average around 130 lbs. Interesting to know is that sturgeon are found all over the world: in the Caspian & Black Sea, some parts of the Pacific Northwest and South Atlantic regions of North America, the big lakes and rivers in Europe etc. Moreover, most sturgeons are anadromous fish, spending most of their time in salt water, but migrating upstream to spawn (lay eggs) in fresh water.

The History Of Caviar

The mystique and luxury of caviar dates back to the 4th Century B.C. In records, the Greek philosopher Aristotle described this delicacy as the eggs of the sturgeon, heralded into banquets amongst trumpets and flowers.

However, apparently the Persians were the first to prepare and savour sturgeon roe. In that time, many medicinal powers were attributed to sturgeon roe, Persians named it ‘khav-yar’ (in English ‘cake of strength’). So it seems the word ‘caviar’ as we use it right now originates from the Persian designation. Surprisingly, sturgeon roe has not always been the delicacy that it is today. A long time ago, caviar was eaten by the fishermen at the Caspian sea or served in American saloons as an appetizer to encourage thirst, mainly because of its salty taste.

Of course, without refrigeration, Caviar is quickly spoiled. It is exactly this perishability that made caviar so exclusive, and it was precisely this exclusivity that fascinated the Tzars and the higher echelons of these days. It is an undeniable fact that Russia and the Russian Tsars catapulted Caviar into the world of utter luxury.

Over the years, the popularity of sturgeon roe as a delicacy increased among the upper class of the European society. By the Middle Ages, the British Kings reserved all the sturgeon for their own consumption and knighted it the ‘Royal Fish’, set aside solely for royalty.

By the mid-1800’s, ever-greater quantities of sturgeon were harvested for their eggs, as the aristocracy in Russia and Europe had developed a real taste for the “’ood of the Gods’. Because Caviar had experienced a tremendous increase in popularity around the world over the years, over-fishing, illegal poaching and pollution resulted in the depletion of wild sturgeon from what was once a healthy population.

In 1998, the sturgeon came under the protection of the Convention on the International Trade in Endangered Species of Wild Flora and Fauna (CITES). Regulating international trade in sturgeon was essential to preserve the resource for future generations. A couple of years later, CITES banned all import and export of wild caviar in an effort to end the unsustainable exploitation of sturgeon species. The introduction of CITES controls in 1998, and customers demanding sustainably produced sturgeon caviar, has driven the transformation of the industry into a global sturgeon farming business.

The Tradition Of Preparing Caviar

The tradition of preparing caviar has remained the same for thousands of years. The harvesting, preparation and manufacturing process of caviar is incredibly arduous, and follows strict traditional methods.

The birth of Caviar begins with the removal of the fish eggs (roe) from the sturgeon. After removal of the egg sack, the roe is carefully sieved, cleaned, rinsed and classified according to size, colour, flavour and texture. In general, the size, flavour and colour of the sturgeon eggs varies, depending on whether they are ‘Beluga’, ‘Oscietra’ or ‘Sevruga’ varieties. The eggs can be golden, black, brown, dark green or grey. If the classification process is completed, the caviar moves on to the salting phase.

The salting process is related to the quality of the Caviar, so the quantity of added salt is carefully monitored. The main purpose of salting is to preserve the Caviar, and maintain as much of the ‘fresh’ and traditional flavour as possible. Therefore, the amount of salt used can vary. The most superior type of Caviar is prepared ‘Malossol’, a Russian word for little salt (<3.7 percent). Malossol traditionally was, and still is, used to signal consumers that what they are buying is quality in taste and has not been over-salted. Aside from Malossol, there is pressed caviar, semi-preserved or ‘salted’ caviar, and pasteurised caviar.

It is not merely the preparation and salting process of Caviar that is incredibly arduous. Also, the fact that it takes between 6-20 years—depending on the type of sturgeon—for the female sturgeons to be mature enough to harvest, is a determining factor for today’s caviar prices. The ‘black gold’ is much more than a luxury treat; it is the result of a whole lot of passion and tradition.

A house that stands for passion, quality and sustainability. The Colman Family specializes in selecting the most refined caviar in the world. As caviar ‘affineurs’ they select caviar from the most praised sturgeon species with the greatest care for nature and animals.