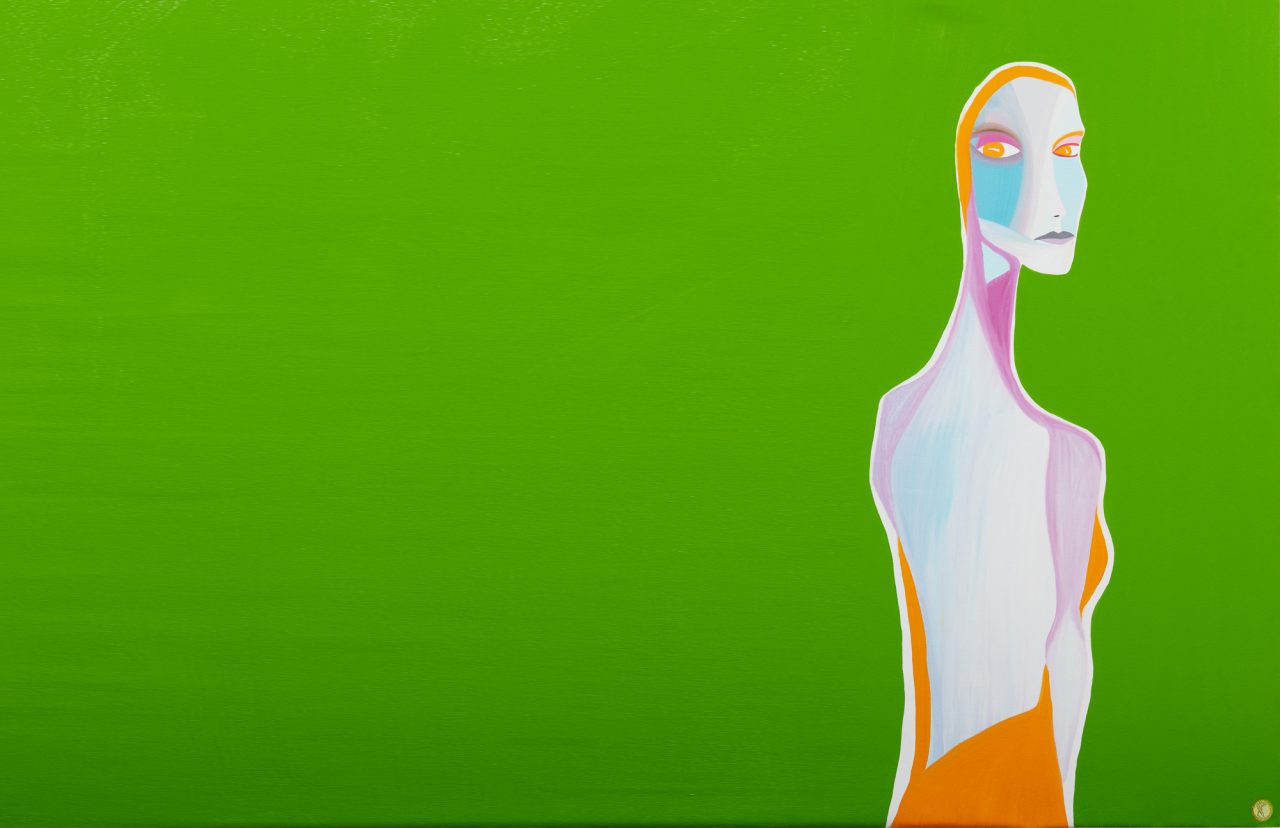 The figurative works are inspired by an interplay of imagination and distilled experiences, exploring shifting states that define us as humans – isolation, resistance, longing, sorrow and hope. Painting under an alias that refers to the ‘traits’ he explores on his canvases, TRATE makes no preparatory drawings, preferring to stand before his canvas and paint intuitively, capturing human sensibilities in deceptively simple and subconsciously sourced forms. Working with handmade paints, enhanced by large ratios of walnut, safflower and linseed oils, his bold aesthetic is defined by traceable brush strokes, haunting facial features bereft of any depth of field and vibrant backgrounds.

At times the works in Technicolour Malaise are poignant and dark, defined by contorted forlorn faces, at other times the works are whimsical and light, with lucidly aware eyes beckoning the viewer to bask in a playground of colour. Death’s Dream Kingdom (2019), (seen at top of page) for example, depicts a bewitching, almost otherworldly, figure, whose self-possessed gaze draws the viewer into the canvas. The unwavering eyes evoke a sense of composure, yet the contorted upper body creates an unsettling sense of imbalance. The name of the work references a line from The Hollow Men, the post-World War I poem by T.S. Eliot. Another work, Ethereal Consumption (2019), alludes to existential questions of human agency in an age of digital excess. As with many of TRATE’s works, the work reveals only the head and upper torso of the subject. Enshrouded in oppressive lines of darkness, the embattled gender-fluid figure stares out defiantly towards the viewer.

“Why do I paint? An innate need. The physical act of mixing oils, layering colours, forming and deforming humanity, helps render intelligible the chaos of my emotions. The canvases take on a life of their own. They show me things. I am obsessed with observing how people’s characters are etched into their physical form; from brooding shadows under eyes, darkened by sleepless nights, to subtle contours, revealing the last fleeting traces of innocence. Physical traits are essential to my work.”

Now living in London, the artist behind the alias, TRATE, has had a rather storied and nomadic life, with many years spent travelling and exploring different pursuits. Ranging from tree-planting in the harsh, remote forests of Northern Canada, to several years of humanitarian work with the UN in Mali, to living on a farming commune near the Swiss Alps, to working in finance in Buenos Aires, Mexico City and London. The vibrancy of these diverse experiences, distilled through his imagination, ultimately act as inspiration for TRATE’s figurative works. TRATE’s work is held in private collections around the world, including in Canada, Mexico, France, UAE and the UK.

See also: César Pelli: The Architect of One Canada Square in Canary Wharf dies at 92