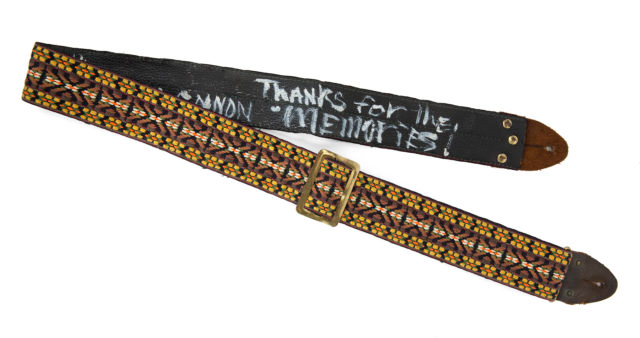 Julien’s Auctions and The Beatles Story present a spectacular Beatlemania memorabilia auction on Friday, May 9-10th. The two-day event, Music Icons: The Beatles In Liverpool, held for the first time at The Beatles Story Museum in Liverpool, UK, the birthplace of The Beatles, as well as online at juliensauctions.com, will feature items from John Lennon’s guitar strap and the Yesterday and Today ‘butcher’ album prototype, and a baseball signed by The Beatles.

In addition Julien’s Auctions will partner once again with The Beatles Story to bring their Beatles and Merseybeat “Memorabilia Day” back home to Liverpool on Friday, May 10th 2019 (12-8 p.m. GMT) for a spectacular two-day Beatlemania event. Fans and collectors are invited to bring in their Beatles memorabilia for appraisal by the experts for free at The Beatles Story’s Fab4 Cafe on the Royal Albert Dock.

The Beatles are arguably the most influential music group of all time, a phenomenon upon their arrival on the music scene in Liverpool in 1960, and at the forefront of the ‘British Invasion’ of the American pop charts. Their music, style and culture continue to reverberate within millions of artists and fans worldwide today.

One of the highly anticipated items announced for the auction is John Lennon’s owned and signed album Yesterday And Today (1966), a U.S. First State ‘Butcher’ album prototype stereo example, considered by Beatles experts as the rarest Beatles record in the world. It was displayed on the wall of his Dakota apartment in New York until John Lennon had an assistant take it down and deliver it to the Record Plant where he signed it in blue ink: “To Dave from/ John Lennon/ Dec 7th 71.”

The recipient was Dave Morrell, a Beatles fan and bootleg collector. “The Butcher” was given essentially in a trade for a reel-to-reel tape of Morrell’s Yellow Matter Custard bootleg that Lennon desired. Lennon filled the blank back of the cover with an original piece of art depicting a man holding a shovel with his dog in front of a setting sun. The cover also includes autographs by Ringo Starr and Paul McCartney, which Morrell obtained later. This is believed to be the only First State Butcher album bearing three Beatles signatures and is estimated at $160,000-$180,000.

“There is no Beatles album in the world that compares with this one in terms of both rarity and value,” said Gary Hein, Beatles expert. “This important world class pop culture piece would add significantly to any Beatles collector, Art, Pop Culture or Record collector’s collection.”

Another Lennon piece coming to auction for the first time is his owned and signed guitar strap (estimate: $20,000-$30,000) for his 1956 Les Paul Junior guitar used at the One to One sessions at Butterfly Studios in New York and on stage during the time that the Plastic Ono Elephant’s Memory band backed Lennon and Yoko Ono (1971-1973). It is the only guitar strap signed by Lennon to come to auction.

Other fascinating, personal items associated with the Beatle include a John Lennon and Neil Aspinall signed publishing agreement for the song Julia estimated at $8,000-$10,000; his drawing Astro Gems featuring his version of Stonehenge from his language art class in 1976-77 (estimate: $20,000-$30,000); Lennon’s detention records from his teachers at Quarry Bank High School (estimate: $3,000-$5,000) and more.

Other iconic Beatles items up for bid include: a Beatles signed baseball (estimate: $80,000-$100,000) given to Mike Murphy, manager of the San Francisco Giants Clubhouse during The Beatles’ final concert in the United States at San Francisco’s Candlestick Park on August 29, 1966; a Liverpool Airport poster signed by the Fab Four (estimate: $30,000-$50,000) announcing the “Visit of The Beatles” on July 10, 1964, when The Beatles arrived at the airport to attend the premiere of their film A Hard Day’s Night (UA, 1964), and gave a press conference at the airport’s Blenheim lounge; a 1962 Beatles signed school book tablet made into an autograph book featuring the early Beatles (estimate: $10,000-$20,000); a The Morecambe and Wise Show (Associated Television Ltd) script signed by The Beatles (estimate: $15,000-$20,000); and a black and white promotional photograph signed by George Harrison, John Lennon, Paul McCartney, and Ringo Starr taken by Les Chadwick, assistant to photographer Peter Kaye in Kaye’s Liverpool photographic studios in September 1962 (estimate $8,000-$10,000);

Also featured are George Harrison’s original handwritten lyrics and documents letters from the early 1970s, including a handwritten first draft of his 1971 song Bangla Desh, written to raise awareness for refugees in East Pakistan, when Harrison started to organize The Concert for Bangladesh with Ravi Shankar and handwritten letters from Klaus Voormann, who designed The Beatles’ 1966 Revolver album cover (estimate: $60,000-$80,000); a felt pen drawing of a city in the valley, with two large eyes in the sky, drawn by Harrison and Geoffrey Baker while in Rishikesh, India in February 1968 (estimate: $8,000-$10,000); a student information card for Paul McCartney and a ledger with information about McCartney, George Harrison, and many others, from 1959 to 1979, both from The Liverpool Institute (estimate: $15,000- $20,000); Harrison’s brass buckle with a relief of the seven-headed horse Uchchaihshravas on the front, and “Dark Horse Records An Image Factory Production” on verso with a pre-printed signature from George Harrison (estimate: $800-$1,200); a left-handed Hofner B-Bass Hi-Series guitar signed on the mother-of-pearl pickguard in blue marker by Paul McCartney (estimate: $4,000-$6,000); an original 1960s internal wood door from Tittenhurst Park, Berkshire where John Lennon and Yoko Ono lived from 1969 to 1971 after The Beatles broke up, then Ringo Starr owned from 1971 to 1989, which was the centre for most of Ono’s and Lennon’s recording, film, political, and promotional activities until they left for the United States, including the recording of their Imagine album and the filming of the correlating movie (estimate: $2,000-$4,000) as well as signed checks, record awards, autograph books, photographs and more.

“Julien’s Auctions is honoured to have been a part of Beatlemania history with our record breaking sales of some of the Fab Four’s most important and newly discovered memorabilia to come to auction,” said Darren Julien, President/Chief Executive Officer of Julien’s Auctions. “Each year we look forward to setting the bar even higher by putting together another spectacular auction event that celebrates the brilliance and artistry of rock and roll’s greatest and most iconic band.”

The Beatles Story will be the perfect backdrop for the Beatles auction event of the season, as the world’s largest permanent exhibition dedicated to the Fab Four the award-winning attraction features immersive recreations of key locations from the band’s story including The Casbah Club, The Cavern Club, and Abbey Road Studios.

“We are delighted to welcome Julien’s Auctions to Liverpool, the birthplace of the Beatles, for their annual Beatles extravaganza,” said Martin King, Manager at The Beatles Story. “Julien’s has auctioned many iconic record-breaking Beatles items over recent years. There are some great items included in this auction, which will interest Beatles fans from all over the world. We are all very excited.”

More information on the events here.