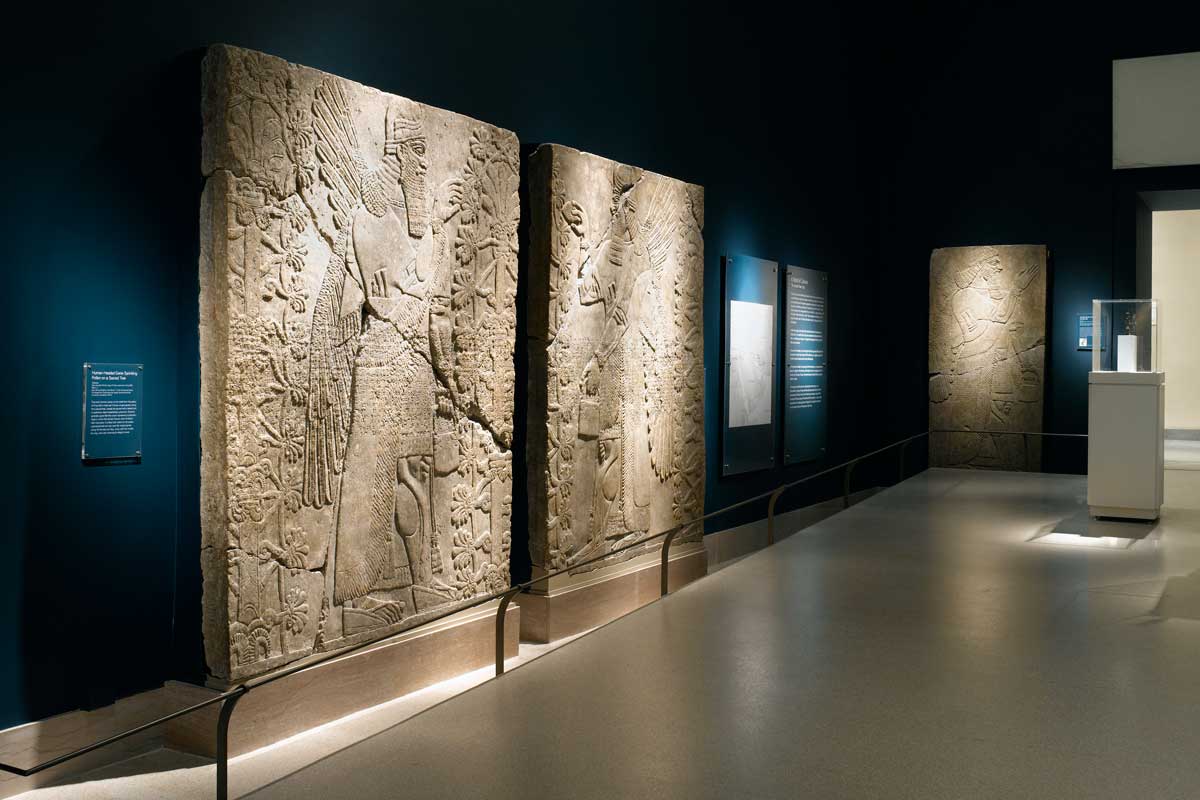 With input from Bank of America’s Rena DeSisto and the Brooklyn Museum’s Lisa Bruno, Arts & Collections takes a detailed look into the Art Conservation Project and its ongoing efforts to restore six Assyrian reliefs

Since 2010, Bank of America has provided grants for not-for-profit museums to facilitate the conservation of significant artwork and historical treasures. Today, the Art Conservation Project has executed approximately 150 such operations, covering artefacts from 30 countries across six of the seven continents. This is one of several cultural diplomacy efforts that Bank of America undertakes to celebrate and protect the arts. The Art Conservation Project manages between 14 and 21 grants per year.

Rena DeSisto, global arts and culture executive at Bank of America, reveals that the competition for the grants is fierce: ‘As the programme has become really well known, we have received more and more applications—we’ve received 300 this year. As you can imagine, it becomes more challenging to pick and choose,’ she says.

The projects seek to restore heirlooms from different cultures, artistic movements, styles, geographical locations and eras. ‘We try to be diverse, to choose things from different time periods so that we’re shining a light on many different parts of the world,’ DeSisto explains.

At present, the Bank of America Art Conservation Project is funding the maintenance of a collection of Assyrian reliefs displayed in the Brooklyn Museum. The museum has 12 Assyrian reliefs in total, six of which have previously received conservation treatment. The remaining six are currently being restored by Bank of America’s scheme where a team of eight conservators are working on the project.

The towering alabaster reliefs have proven to be a perennial favourite amongst museumgoers and a shining example of ancient craftsmanship. Having been housed in the Brooklyn Museum’s Hagop Kevorkian Gallery of Ancient Near Eastern Art since 1937, they have become a cornerstone of the institution. The impressive artefacts were completed in 879 BCE. They were designed to adorn Assyrian King Ashurnasirpal II’s lavish northwest palace, which lies on the Tigris River at Kalhu—known today as Nimrud, located slightly north of Baghdad, Iraq.

Carol Lee Shen chief conservator at the Brooklyn Museum, Lisa Bruno, has been coordinating the project by assessing the treatment strategy of the artefacts and executing the plans. She explains that the reliefs have been ‘carved with majestic images of kings, divinities, sacred trees and magical beings called “apkallu” in the language of the Assyrians—translated as “genie” in English. These winged figures could be human-headed or eagle-headed.’

The panels of the sculptures are extremely intricate in their design. Detailed images portray supernatural figures engaging in ritual tasks, providing a genuine glimpse into the beliefs of this Neo-Assyrian civilisation. Upon closer inspection, cuneiform inscriptions praise Ashurnasirpal as a ruler—specifically his triumphs in war. The religious, political and aesthetic contexts that these artefacts provide are immeasurable.

‘These artefacts are a window into our current civilisation and as such remind us of this link to the past. Today, all people from different cultures and backgrounds share the same motivations, desires, fears and dreams as those ancient people. Their beliefs may be different than ours but their motives to create these reliefs, showing wealth and power, are certainly familiar today,’ Bruno says.

A team of conservators have been working to remove the six reliefs from the wall to clean their surfaces, repair breakages and re-mount them for reinstallation into the gallery. Each project member has been highly trained to handle delicate artefacts such as these. The restoration process is expected to last two years in total; each step is carefully executed and meticulously documented.

Conservation, as a practice, is constantly evolving. For this reason, conservators must stay up to date with the latest techniques and processes—a notion that Bruno is very familiar with. In the case of the Assyrian reliefs, the process of mortar removal that was used for the previous six artefacts has been updated.

Beforehand, Bruno’s team removed the mortar mechanically with scalpels, chisels and a vibrating engraving tool. ‘It was a slow and painstaking process requiring precise hand skills […] the risk of damage to the stone was high,’ Bruno says. Now, in 2018, they have a laser at their disposal. The laser harnesses technology used in tattoo removal, it increases precision and saves valuable time.

A contributing factor to the urgency of this particular conservation mission is the threat faced by similar artefacts in Iraq. The archaeological site in Nimrud, where the reliefs originated, suffered serious damage at the hands of the terrorist group, Islamic State, in 2015. Ancient polytheistic images such as these were purposefully targeted during a series of violent raids. For this reason, DeSisto stipulates that ‘if they [the Assyrian reliefs] were still in situ they would be in danger.’

The nature of their origin emphasises the need for continued protection of cultural artefacts in certain provinces—especially in times of turmoil and unrest. Considering their ‘endangered status’, there has never been a more pertinent time for art and history enthusiasts to experience them first-hand. ‘It’s important to spread the knowledge of many cultures.

Art is a record of history and culture and human thought throughout the ages. We live in a very interconnected world and there’s a lot of benefit to understanding cultures not only as they are today but as they were,’ DeSisto maintains.

By dedicating their time, resources and expert knowledge, members of the Bank of America Art Conservation Project consistently accomplish their goal of replenishing the store cupboard of history. The six Assyrian artefacts from the Brooklyn Museum are steadily being brought back to life and will once again bring joy and knowledge to those they come into contact with. Restoring such items is pivotal to their longevity; it confirms that they can be seen, studied and enjoyed for generations to come.

An Expert's Guide to Investing in Art