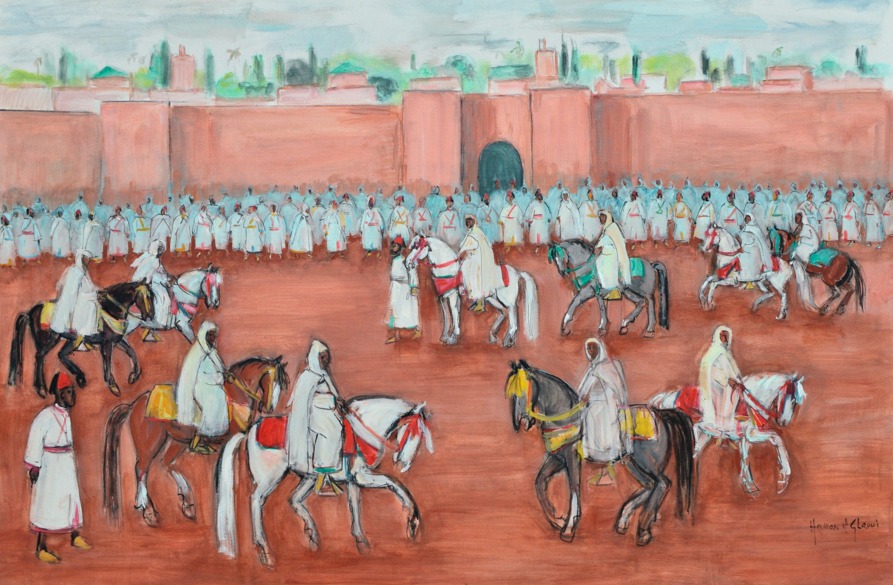 On April 2nd 2019, Sotheby’s is launching a Modern and Contemporary African Art auction to exhibit masterpieces by renowned Sudanese artists. The line up will include artwork from Ibrahim El Salahi and Kamala Ibrahim Ishaq, who helped found the Khartoum School in Sudan, alongside artwork from Salah Elmur and Hussein Shariffe.

Formed in 1960, The Khartoum School was a modernist art movement formed to simulate the changing face of the newly independent Sudan, from Anglo-Egyptian Sudan. The movement was characterised by an aesthetic known as hurifiyya, which involved modifying Arabic script into abstract shapes, and thereafter amalgamating these with Islamic motifs to address social issues post-independence. In 1975, however the group separated following Kamala Ishaq’s departure to form the Crystalist Group and Ibrahim El Salahi was detained, after being accused of anti-government activities.

With his grandfather, Mohammed Ahmed Elmahdi, leading the fight against colonialism during the 1880s in Sudan, Hussein Shariffe belonged to one of the most significant families in Sudanese history. Growing up he was enamoured and enthused by art, though his desire to pursue art was refuted by his father, who insisted he followed a career in the more academic fields such as science or law.

To comply with his father’s expectations, Shariffe chose to study Modern History at Fitzwilliam College, Cambridge, yet later moved to the moved to the University of Sheffield to study architecture and then gain feeling unfulfilled, finally switched to the Slade School of Fine Arts. He was mentored under Lucien Friend and sharped his artistic talents to win the John Moores Prize for young Artists.

His artistic itinerary’s highlights include the oil painting, Birth and Death of the Stars (1995-1997), which reflects both Sudan’s convoluted political history and Shariffe’s relationship to the west. His oeuvre was featured in the Khartoum School – The Making of the Modern Art Movement in Sudan (1945-present) at The Sharjah Foundation in the UAE.

Central to the Khartoum modernist movement, Ibrahim El Salahi examines African and Islamic motifs via an assemblage of paintings and drawings. Like Shariffe, Ibrahim finished his degree at the Slade School of Fine Arts in London, before moving back to Sudan to teach at The College of Fine and Applied Arts, that was catalytic for initiating the Khartoum School movement

Outside of art, El Salahi actively worked for multiple governments starting off by founding the Sundanese Embassy’s first ever department of Culture and going onto to work for Qatar’s Ministry of Information. While working for these governmental organisations, El Salahi was imprisoned for six months and without trial in Sudan; his imprisonment by the Sudanese authorities became a crucial impetus for his later art works.

In a 2015 interview with Mark Rappolt, he emphasised the influence imprisonment had on his work, “I work on a new piece, and because I do not know what shape it is going to take, I add pieces. This is something that I learnt in jail. In jail, if someone was found with a pencil or paper, then something terrible would happen. So I used to have smaller sheets of paper and I used to draw small embryo forms. Then I added little bits and I used to bury it in the sand outside the cell, just for fear of solitary confinement for 15 days. Anyway, when I came out, I recalled the same idea of making… Each piece [of the work] has to be framed separately, because it’s an embryo of an idea that I’m not aware of completely. Then when it grows together it creates a whole. “

The final two works to be presented by Sotheby are from Salah Elmur. Born in Khartoum, Sudan, Elmur was influenced immensely by the diversity of Sudanese society and his work reminisces on his childhood encounters in Sudan. His interest in photography stemming from spending time in his father and grandfather’s studio is imbued in his paintings, through their similarity to 1960s studio portrait photography.

Elmur’s A Cat and a Girl and The Family Portrait offer an authentic reading of Sudanese society with their detailed depictions of domesticity in Sudan.