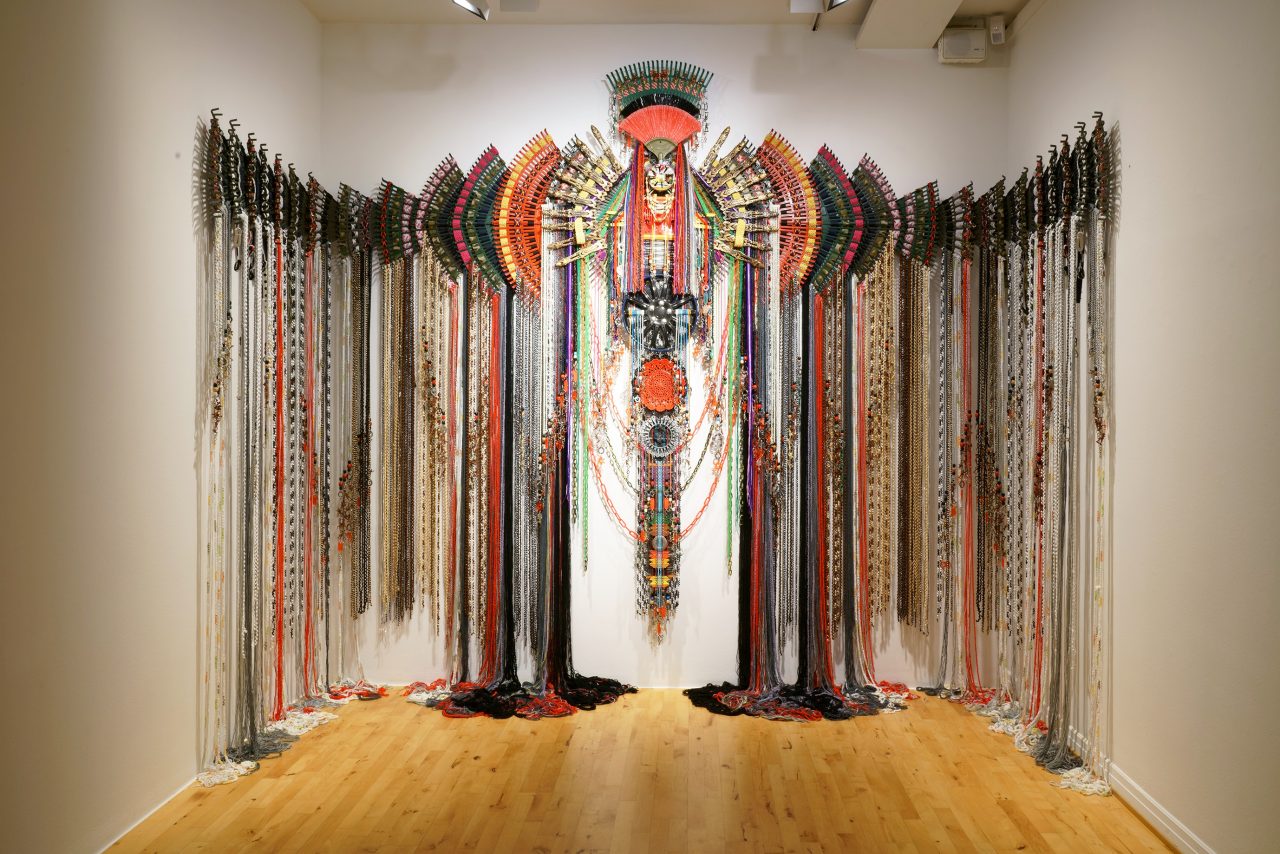 The Asia Society has announced that over 40 artists and collectives from 19 countries have been selected to participate in the inaugural Asia Society Triennial, a multi-venue festival of art, ideas, and innovation. Titled We Do Not Dream Alone, the exhibition will open to the public on June 5th, 2020 at Asia Society Museum, as well as multiple locations throughout New York City.

The artists and collectives chosen for the Asia Society Triennial work across a variety of disciplines including painting, sculpture, photography, video, fibre art, and performance. They represent countries across Asia and the Asian diaspora, and bring together a spectacularly diverse range of works and viewpoints. Nearly half of the artists have been commissioned to create new work; many of these works are site-specific.

“Art has the power to connect us beyond borders and across cultures,” says Asia Society President and CEO Josette Sheeran. “It is a vital time to connect on our common, human dreams. This first-ever Triennial of Asian art will bring the power of visionary art and ideas to remind us that indeed we do not dream alone.”

To create a truly democratic and wide-reaching festival, Asia Society will partner with other New York cultural institutions and venues such as Governors Island and Times Square Arts Midnight Moment to bring the Triennial to locations across New York City and ensure it is free to all audiences. Led by Agnes Hsu-Tang, Ph.D., Executive Chair of the Triennial and Chair of its Steering Committee, the Triennial reaches beyond New York City and the visual art field to build seminal collaborations, including with the New York Philharmonic, Santa Fe Opera, and others to create a platform that brings together a diversity of art forms.

In addition to showcasing works by renowned performance artists such as Susie Ibarra, who will perform at New-York Historical Society, the Triennial will feature a newly commissioned work by contemporary composer Huang Ruo that will premiere at the Opening Night Gala on June 5. Huang Ruo, composer of the highly anticipated new opera M. Butterfly, is the Triennial’s inaugural composer-in-residence. “A contemporary art festival should be Gesamtkunstwerk, a total work of art, in itself,” says Dr. Hsu-Tang. “The Triennial advances the legacy of Asia Society Museum as a cultural vanguard of diverse artistic voices from and about Asia. This new international platform builds on more than six decades of institutional heritage of diplomacy and systematic engagement between Asia and America.”

Artists in the exhibition work across today’s mediums of artistic expression, reflecting the diversity of contemporary artistic practice. Whether the artists are early in their careers or more established, their works offer opportunities for wide-ranging conversations about art, identity, and politics.

“My co-curator and I have sought to commission artists and to find complex works that have not been widely seen in this country,” says Mr. Tan. “In the face of an increasingly fractured world, where the old ties between cultures and civilizations have become undone, contemporary art has risen to prod, pull, and nudge us to resist pessimism. With this Triennial, we are pushing beyond our own walls to present artists and artworks that interrogate the complexities of the present moment and that invite viewers to consider new ways of seeing.”

“Asia Society’s purview across the region and the diaspora represents diverse cultures, religions, ethnicities, political ideologies, and identities,” says Ms. Yun. “Consequently, as we considered which artists to include in our first Triennial, we initially cast a wide net. Ultimately, we focused our selection on artists whose practices actively and uniquely engage timely, yet universally accessible, issues relating to democracy, identity, gender, and sustainability. We are especially pleased to be collaborating with such a dynamic group of artists and venue partners to premiere newly commissioned works, many of them specific to New York City.”

Kimsooja is a multimedia conceptual artist who lives and works between New York, Paris, and Seoul, and whose work will be displayed at multiple Triennial locations. At Governors Island, Kimsooja will create a site-specific immersive installation, incorporating architecture, light, and sound. At other venues, the artist will activate her project To Breathe—The Flags, incorporating a cross-pollination of national flags into a unifying symbol that in the artist’s words “is a wish for coexistence, for an ideal world in which individuals can unite in celebration of our distinctions and of our common humanity.”

Israeli-born artist Ghiora Aharoni utilizes found, often ancient, culturally specific objects and texts to explore history, symbolism, and imagination in works that question age-old ideologies and ethnic conflicts as well as love, family, and sexuality. His contribution to the Triennial will include the use of phulkari, a traditional Punjabi dowry shawl that Aharoni inscribes with his own family biography texts, drawings, symbols, and objects of daily life, thereby overlaying them with new meaning and drawing them into conversation with contemporary ideas and artistic practice.

Anne Samat is a fibre and textile artist from Malaysia whose work addresses issues of identity, gender, and nationhood by pushing the boundaries of traditional Southeast Asian weaving techniques infusing her ornate and visually arresting woven sculptures with everyday household objects. She will be contributing a new, site-specific installation at Asia Society Museum. Chinese artist Xu Zhen has created a suite of sculptures composed of replicas of classical statues deemed the highest benchmark of western and Asian civilizations. These become a means to explore preconceived hierarchies within the art historical canon and provoke dialogue on the sometimes violent nature of cultural appropriation. With irony, Xu’s work raises issues relating to the body, craftsmanship, originality versus mass production, appropriation and authorship, agency, and the monetization of art. In a house on Governors Island, Iranian artist Reza Aramesh will create an installation of ceramic vases that recall Hellenistic artifacts, but incorporate images of contemporary war and torture, alluding to the continuity of conflict and barbarity as well as the history of Governors Island as a military outpost.

Arpita Singh, a world-renowned painter whose work has rarely been shown in the U.S., will be represented in the Triennial with a suite of paintings that reflect on the experience of the older woman in contemporary Indian society. anGie seah is a performance and multimedia artist from Singapore whose practice explores the complexities of the human psyche through cathartic acts of spontaneity. For the Triennial she will collaborate with local communities to create a participatory installation as a humorous antidote to the emotional and psychological strains of contemporary life. Lu Yang attempts to reconcile the gap between the mysticism of religious practice and rational, scientific thought. Born and currently based in Shanghai, China, her multifaceted, multimedia practice entwines elements of Buddhism, neuroscience, gender, and physiology with pop-culture tropes including manga, science fiction, and video games. She will create a site-specific, interactive installation in a suite of rooms on Governors Island. Mina Cheon will create a participatory public artwork, in partnership with the New York Philharmonic, at Lincoln Center’s David Geffen Hall. The work invites audience members to consider the unity of North and South Korea through consumption of one of the region’s most popular and symbolic snacks, the Choco Pie. Cheon will also have an installation on Governors Island featuring a series of art history lessons given by her alter ego “Professor Kim.”

Artists will also explore issues closer to home. Xu Bing and Sun Xun will create new works for a special project that responds to the Declaration of Independence and the principles of equality and moral leadership on which the United States government and American national identity is based. Guest curator: Susan L. Beningson.

A range of interdisciplinary programs will be held in conjunction with the Asia Society Triennial, exploring the themes in the exhibition We Do Not Dream Alone and ranging from film, to food, to events looking at the global challenges of refugees and migration, artificial intelligence, and environmental concerns such as the scourge posed by plastics. Among the highlights are a film series focused on gender and gender expression in contemporary Asian cinema, guest curated by Giovanna Fulvi, International Programmer at Toronto International Film Festival, as well as a performance by drummer/composer Susie Ibarra, who is known for her unique blend of Asian and jazz percussive traditions, that will be presented in a free event at the New-York Historical Society’s Patricia D. Klingenstein Library.

Collateral events and associated venues
In addition to the core Triennial We Do Not Dream Alone exhibition venues, a number of related projects are being organized at collateral sites. Among these are the New York-Historical Society exhibition titled Dreaming Together: New-York Historical Society and Asia Society Museum on view April 3, 2020–April 4, 2021. More than 35 works drawn from both institutions’ collections generate dialogue about urban and natural environments, protest and rebellion, individuals and identities, and borders. The exhibition is curated at New-York Historical by Wendy N. E. Ikemoto, Ph.D., curator of American art.

Governors Island
Governors Island is a 172-acre island in the heart of New York Harbor nestled between Lower Manhattan and the Brooklyn waterfront. Eight minutes from the energy and excitement of the City, the Island is a popular seasonal destination. An award-winning new park is complemented by dozens of unique historic buildings, environmental educational facilities, a rich arts and culture program and a 22-acre National Monument managed by the National Park Service. Unlike anywhere else in New York, Governors Island offers peaceful settings with sweeping views of the Harbor, Lower Manhattan skyline and Statue of Liberty. Looking ahead, the Island will be activated year-round with expanded educational, commercial and non-profit uses.

Times Square Arts
Times Square Arts collaborates with contemporary artists to experiment and engage with one of the world’s most iconic urban places. Midnight Moment is the world’s largest, longest-running digital art exhibition, synchronized on electronic billboards throughout Times Square nightly from 11:57pm to midnight.

David Geffen Hall at Lincoln Center
In 1962, Philharmonic Hall—renamed Avery Fisher Hall in 1973 and later renamed David Geffen Hall in 2015—became one of the first buildings to be completed on the Lincoln Center site and home to one of its first resident organizations, the world-renowned New York Philharmonic, the oldest symphony orchestra in the U.S. Today, David Geffen Hall hosts notable performances by acclaimed orchestras and artists from around the globe, as well as galas, film premieres, graduations, and conferences.