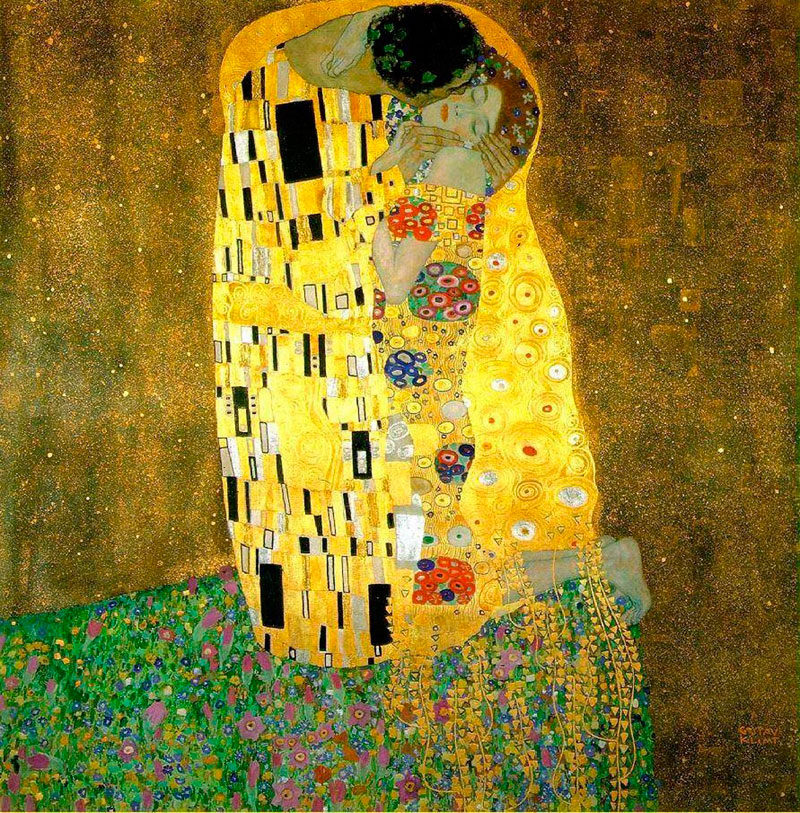 Klimt was the master of symbolism, but was his personal life as scandalous as his paintings?

Born on July 14 1862 in Baumgarten, Austria, Gustav Klimt was the son of a struggling gold engraver. Klimt was the second of seven children and lived in poverty while he studied architectural painting at Vienna’s School of Applied Arts. All three of the Klimt boys displayed early artistic talent—as a member of the ‘Company of Artists’ (a group consisting of Klimt, his brother Ernst and their friend, Franz Matsch), Klimt began his career selling commissioned works and painting murals for his teachers.

By 1888, the Company of Artists had produced notable works and received the Golden Order of Merit from Emperor Franz Josef I of Austria for their achievements. Their work included murals at the Vienna Burgtheater and on the ceiling above the staircase at Kunsthistorisches Museum.

Gustav Klimt’s career and artistic style was disrupted in 1892 by the death of both his father and his brother, Ernst. He was deeply affected by their passing and was forced to take financial responsibilities for both his father and brother’s families. During this time, Klimt was becoming influenced by the Viennese Avant-garde movement and formed an intimate friendship with Emilie Flöge, the sister of Ernst’s widow.

As an artist, Gustav Klimt began to reject traditional training and pursue a more personal style that relied heavily on symbolism. He was asked to produce three ceiling paintings for the University of Vienna’s Great Hall, for which he chose to employ highly decorative symbolism. The ‘pornographic’ figures in the paintings sparked considerable controversy and were never installed by the University, leading Klimt to never again accept a public commission.

In 1897, Klimt and a group of friends also pursuing artistic freedom resigned their membership at the Vienna Artists’ Association and founded a new organisation: the Vienna Secession.

The Secession—named after an ancient Roman term meaning ‘revolt against the power’—made Klimt the group’s first president. Rejecting classical art, the organisation did not encourage a particular style but supported young artists and brought international art to Vienna. Naturalists, realists and symbolists coexisted and the group went on to publish a periodical entitled Ver Sacrum (‘Sacred Spring’). The first issue featured a drawing by Klimt that showed a naked woman holding up a mirror to the audience.

The Secession’s first exhibition featured works that became known as the first in a series of Klimt’s best known and most successful paintings.

The ‘Golden Phase’ marked Klimt’s critical and financial success. Many of the artist’s paintings included gold leaf, likely inspired by the gilded Byzantine art that he would have seen on his trips to Venice and Ravenna. Klimt’s striking figures and landscapes were made up of golden, abstract patterns. The flat, shimmering designs incorporated into his compositions gradually became the real subjects of Klimt’s artwork.

The artist’s glitzy human figures were making their desires known but he lived a simple life and rarely wrote about his vision or methods. His paintings were large and deliberate, and required long sittings by his subjects. He was also known to paint wearing a kaftan, sandals and no underwear, and would cover his sketchbooks in cat urine—his preferred fixative.

Although very sexually active, Klimt was a lifelong bachelor and kept his affairs private. His fame meant that he could be selective over company and he rarely socialised with other artists.

In a rare writing called ‘Commentary on a non-existent self-portrait’ Klimt said:

‘I have never painted a self-portrait. I am less interested in myself as a subject for a painting than I am in other people, above all, women.

‘There is nothing special about me. I am a painter who paints day after day from morning to night…whoever wants to know something about me…ought to look carefully at my pictures.’

In 1905, Gustav Klimt and a number of other members resigned from the Vienna Succession, following a disagreement over the group’s association with a local gallery (Klimt’s group was opposed to the commercialisation of their association).

In his later years, Klimt spent time with Emilie Flöge and took to painting detailed landscapes. Klimt’s first prize award at an international exhibition in Rome for his painting Death and Life (c.1908-1915) was considered among his greatest achievements.

Klimt suffered a stroke in January 1918 that left him partially paralyzed. Whilst hospitalized, he contracted pneumonia and died that same year on 8 February, aged 55. He left numerous paintings unfinished and was buried at the Hietzing Cemetery in Vienna. Since his death, Klimt’s paintings have sold for some of the highest prices ever recorded for individual works of art.

Probably the most famous of Klimt’s paintings, The Kiss is central to the Vienna Secession movement and shows two lovers embracing on the edge of a meadow. The painting was so popular that it was bought whilst it was still unfinished.

Another painting from Klimt’s Golden Phase, this is the first of two portraits by the artist depicting the wife of an influential industrialist that supported Klimt. Also called ‘The Lady in Gold’, the painting was stolen by the Nazis in 1941 but was eventually returned to the family.

One of Klimt’s most famous artworks, Beethoven Frieze was painted on the walls of the 19th century Secession Building in Vienna. After the 1902 exhibition for which it was painted, the composition detailing the human quest for happiness was preserved and sold.

This oil painting depicts the daughter of the mythical King Acrisius of Argos who was seduced and impregnated by Zeus—who took the form of golden rain. Klimt’s nude composition clearly shows the rain between Danaë’s legs. The artist would ask his models to pose in these revealing positions and he’d draw them with simple outlines.

If you liked this artist profile on Gustav Klimt, click here to read more on Arts & Collections about Andy Warhol and his career.

Luxury Developments Around the World