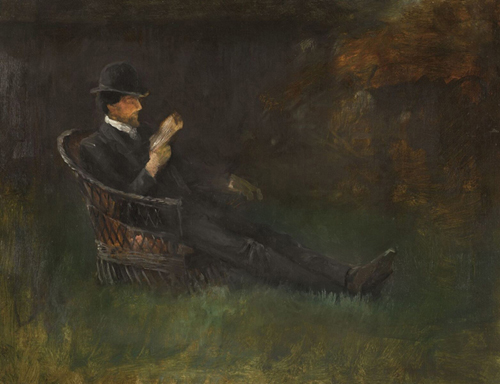 The belongings of one of Ireland’s most prominent creative families are going to auction at Sotheby’s in London on 27 September 2017. Items from the impressive collection offer a valuable insight into the Yeats family’s life and work.

A lot of over 130 letters between W.B Yeats and his paramour-turned-friend will be the most exciting thing up for sale and is expected to go for £250,000 -£350,000. These letters include the early drafts of poems that Yeats sent to Shakespear. There will also be paintings, drawings and sketches, and the personal affects of the Yeats family that show the artistic development of these prominent figures. Much of the collection has never been exhibited before, and the majority of the artwork has not been seen in public for over 30 years.

A spokesperson for the Yeats family said: ‘Our family has enjoyed these items for many years. We are delighted that they will now be exhibited and available for everyone to see in Dublin and in London and for collectors to have the opportunity to acquire their own piece of Irish history.’

John Butler Yeats was father to William Butler Yeats (W.B), Susan Mary (Lily) Yeats, Elizabeth Corbett (Lolly) Yeats and Jack Butler Yeats. Much to his wife’s dismay, he left his job as a lawyer to become an artist and worked as a portraitist for over five decades. He sketched and painted a great variety of people including his children. A group of sketches by Yeats will be included in this auction with pictures of W.B as a baby and child (estimated sale: £5,000 -£7,000). His final portrait will also be sold and is valued at £30,000 – £50,000.

W.B Yeats is widely considered one of Ireland’s greatest poets and is a pillar of 20th century literature. He published dozens of collections of poems, essays and plays and went on to win a Nobel Prize in 1923. He was very interested in the occult and symbolism, which is reflected in many of his poems. The sale includes W.B.’s writing bureau on which he would have written letters (estimated to fetch between £20,000-£30,000), an early sketchbook that contains very early drafts of poems, and two pastels of Coole (estimated at £7,000-£10,000 and £8,000-£12,000).

Susan Mary (Lily) Yeats was an embroiderer. She worked in the embroidery section of Morris & Co. in London. She later founded Cuala Industries with her sister Elizabeth and ran the embroidery department which created textiles. Her designs are associated with the Celtic revival and she created beautiful scenes of nature. A textile by Lily illustrating W.B.’s poem The Lake Isle of Innisfree (1888) is included in the auction and is estimated at £1,500 – £2,500.

Elizabeth Corbett (Lolly) Yeats began a printing press with W.B. where she published over 70 books including 48 by William himself. She studied printing with the Women’s Printing Society in London and went on to become the first commercial printer in Ireland to work exclusively with hand presses. Lolly Yeats is represented in the auction by her childhood drawings as part of a family scrapbook estimated to reach £4,000 – £6,000, and in the photo albums she and her sister collected of the Yeats family estimated at £5,000-7,000.

Jack Butler Yeats began his career as an artist in illustration. He then developed to work mostly in oils and was the first Irish artist to sell over £1 million for his works. His favourite subjects were landscapes, horses and the circus. He also became Ireland’s first medalist in the Olympic Games having won a silver medal in the arts and culture segment for his painting The Liffey Swim (1923). His painting The Runaway Horse (1954) is the most valuable of the 35 artworks by Jack Yeats in the sale having been valued at £150,000-250,000. Also included in the sale are his childhood sketchbook from aged 12 (est. £10,000-£15,000) and his teenage scribbling diaries recording Jack’s new life in London from 1888 and 1889 (est. £8,000-£12,000).