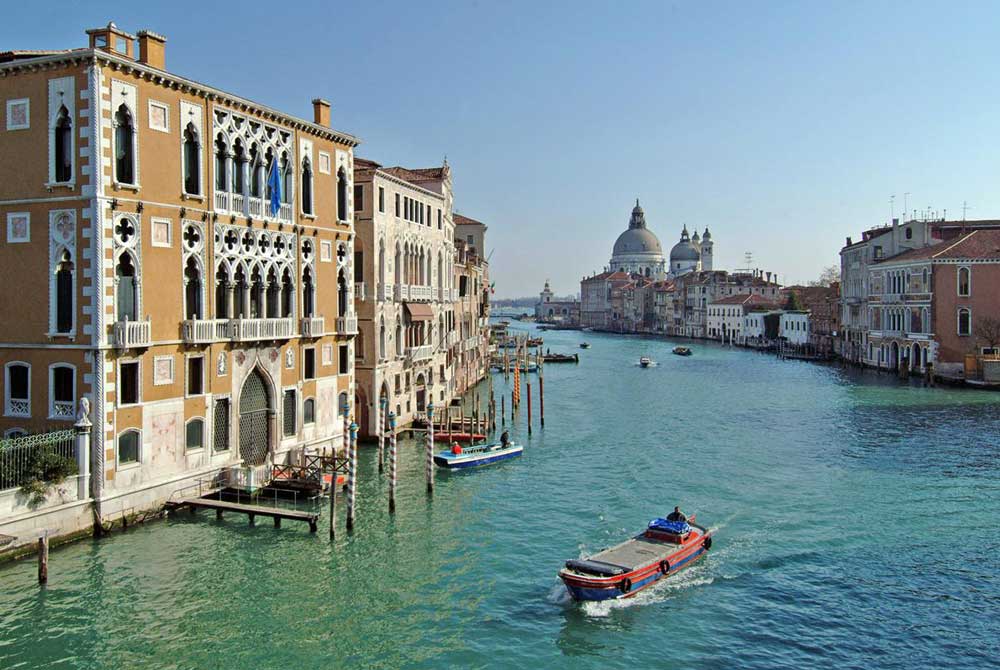 The only city in the world built entirely on water, magical Venice is not simply crammed with fascinating architecture but also boasts some of Italy’s finest art collections in its museums and palaces.

Venice, La Serenissima, is a unique and extraordinary city, one of the world’s great sights. Impossibly romantic, it has fascinated artists, writers and travellers for centuries and, in our traffic-clogged and fast-moving age, its ‘other world-ness’ is still an endless source of wonder for visitors.

There is an enormous treasure-trove of art in the city, but even if you never step into a museum or church, days can be filled by simply walking the atmospheric calle and campi. Just make sure you leave the crowds milling around Piazza San Marco behind and branch off into the nether reaches for a glimpse of ‘real’ Venetian life. It is easy to get lost in Venice, but just as easy to find yourself again; you are never far from a yellow sign indicating the route to San Marco, Rialto, Ferrovia (the station) or Piazzale Roma. So be bold; explore and let La Serenissima work its magic.

Although pre-Lenten festivities had existed for hundreds of years, the heyday of Venice’s carnival was the eighteenth century. Elaborate stages would be set up in Piazza San Marco for jugglers, wrestlers, acrobats and other performers and it became the norm to wear papier- mâché masks both as decoration and as a means of concealment. Napoleon put paid to the fun after his invasion in 1790, and it was only in the 1970s that the traditional ‘Carnevale’ was revived.

Today, it is one of the world’s most famous carnival celebrations and visitors pour in from all over the globe for 10 days of partying leading up to Martedì Grasso (Shrove Tuesday). THEVENETIANS tend to keep their private festivities behind closed doors, but there are plenty of events open to visitors. To get into the groove, arm yourself with at least a mask (a full costume would be even better), but avoid the mass-produced junk and go for an artisan-made model.

The most traditional Venetian masks are simple, white faces, but most of those you see in the shops today are based on the principal ‘commerdia dell’Arte’ characters; Harlequin and Columbine, Pierrot and Panta- loon. You can buy beautiful, artisan-made masks at the following shops; Ca’ Macana (Dorsoduro 3063), Papier Maché (Castello 5175) and Tragicomeda (San Polo 2800). To hire your traditional Venetian costume, go to Atelier Pietro Longhi (San Polo 2604B).

Soak up the atmosphere

One of the best ways to get a feel for this watery city is to take a trip the length of the Grand Canal, by public vaporetto, water taxi, or, best of all, by gondola at twilight; the latter may be a cliché, but it will be an unforgettable one. The route along Venice’s high street not only offers views of some of the city’s most stunning palazzi that cannot be seen from any other angle, but also gives an idea of how the city works; this is a major thoroughfare with all the varied traffic (private boats, taxis, water buses, ambulances, police boats, grocery barges) that you would expect in any busy urban centre.

A piazza, a church and a palace

Referred to as ‘Europe’s Drawing Room’ by Napoleon, glorious Piazza San Marco is the only square in Venice to actually be given the title ‘piazza’. The lowest point in the city, it is one of those places whose magic works in all weathers, be it shrouded in pearly grey winter fog or filled with bright sunlight and crowds of summer visitors. The massive piazza is flanked on three sides by graceful porticoes. It is a fantastic place to sit and watch the world go by. So grab an outside table at Florian’s, order something to drink and sit back to enjoy the show.

The glittering edifice that is Venice’s cathedral was constructed between 1063 and 1094 on the site of an earlier chapel which had been purpose-built to house the relics of St. Mark. It sits proud at the head of the piazza, its moorish domes and elaborate golden facade so completely different than anything else you will see in Italy and evidence of Venice’s strong past links with Byzantium. Try to time your first view of the church from the western end of the square at sunset when the mosaics glow in the evening light.

The interior is an Aladdin’s cave of treasures, starting with one and a half square miles of golden mosaics that were begun in the 1090s and finished some 600 years later. The columns are fashioned from rare marbles and alabaster while the magnificent twelfth century pavement is made from marble and glass. The basilica’s most precious treasure is the dazzling ‘Pala d’Oro’, a tenth-century altar screen made in Constantinople from superbly worked gold set with hundreds of sparkling gems. Before leaving, climb up and join the pigeons on the Loggia dei Cavalli to

get up close and personal with the four replicas of the famous bronze horses (the Roman originals are inside) and other sculptural details of the façade.

The dusty pink Gothic Doge’s Palace (Palazzo Ducale, above) was Venice’s seat of political power from the ninth century on, but the building we see today dates from the mid 1400s. Once inside, you can visit the private apartments of the Doge and the grandiose State Rooms, frescoed by the great painters of the day (Titian, Tintoretto, Veronese et al). For a complete contrast, proceed to the criminal court rooms and over the infamous Bridge of Sighs to the Prigione Nuove where petty criminals were incarcerated.

There is no better place on earth to get an idea of what Venetian painting is about than in the Galleria dell’Accademia, housed in the ex-Scuola Grand della Carità. The collection is arranged in chronological order and starts in the former refectory under a magnificent wooden ceiling, with glittering fourteenth and fifteenth-century religious works. The 24 rooms house superb works by the likes of Bellini, Carpaccio, Mantegna, Giorgione, Lotto, Veronese, Titian, Tintoretto and many more. At weekends, it is possible to have a tour of the Quadreria, the museum’s storeroom where the gallery’s ‘overflow’ is kept and which houses some important paintings not otherwise viewable by the public.

An American in Venice

Just east along the Grand Canal from the Accademia is the truncated, unfinished eighteenth-century Palazzo Venier dei Leoni, which houses the Peggy Guggenheim Collection, Venice’s second most visited gallery. Colourful ex-pat resident and copper heiress, Guggenheim had two passions in life, art and men and she amassed a fabulous haul of twentieth-century works (and many lovers) by the likes of second husband Max Ernst, Giacommetti, Magritte, Pollack, Picasso, Chagall, Bacon and many more. Out front on the canal terrace is the huge, playfully obscene bronze Angel of the City by Tuscan artist Marino Marini while the charming back garden, where Peggy and several of her dogs are buried, provides a respite on hot days. Look out for some excellent temporary exhibitions held here.

The huge, severe Santa Maria Gloriosa dei Frari is a brick barn of a church containing a remarkable quantity of art. The tombs of Titian and Monteverdi (the founding father of opera) are here, along with sculptures by Donatello and Bellini. Above the high altar is Titian’s glorious Assumption while the sacristy houses one of Giovanni Bellini’s finest paintings, the Madonna and Child with Saints.

Santa Maria Formosa stands on a pretty campo and houses a famous painting of a blond Venetian woman by Palma Il Vecchio and another by Vivarini of the Madonna della Misericordia. Just north is the vast Santi Giovanni e Paolo, another Gothic brick edifice completed (after nearly 200 years) in 1430; for centuries, the Doge’s funerals were held here and the church houses their splendidly carved tombs.

Venice’s most beautiful Gothic church is located way up in the north- western reaches of Cannaregio, but it’s worth the trek to visit the Madonna dell’Orto where Tintoretto is buried and which houses several of his paintings along with Cima da Conegliano’s masterpiece St. John the Baptist and Saints. Dominating the lagoon from its position on its own little islet is Palladio’s magnificent San Giorgio Maggiore, designed with the façade of a temple.

Its white interior is quite austere apart from two paintings by Tintoretto. You can get a fantastic view of the city from the top of the campanile (there is a lift), a much less crowded viewpoint than that of St. Mark’s bell tower. The magical Santa Maria della Salute stands theatrically at the entrance to the Grand Canal, built as an offering to St. Mary of Health for deliverance from the Black Death of 1630-31.

Different from in any other part of Italy, Venetian street names are a law unto themselves. The only square to be given the name ‘piazza’ is St. Mark’s; all the others are called campo, campiello or corte. Here are some of the other most common terms:

Calle: street, Campo: a square (but literally a field), Campiello or Corte: a small square, Crosera: crossroads, Fondamenta: a street running along a canal, Piscina: once the site of a stagnant pool, Rio: canal, Rio terà: once a canal, now filled in to become a street, Salizada: paved street, usually an important one

Held for 12 days in early September, Venice’s annual ‘Mostra Internazionale d’Arte Cinematografica’ (Film Festival to you and me) is one of Europe’s best cinema events. Based at the Palazzo del Cinema on the Lido, it attracts big-name directors and actors who take up residence in the Westin Excelsior and the Hotel des Bains. It’s glamorous and fun and there are some great movies on offer too.

A night at the opera

On 29 January 1996, the world-famous Teatro La Fenice (‘The Phoenix’) was engulfed by flames for the third time in its existence (it burned to the ground for the first time in 1774 and then again in 1836). The subsequent restoration project involved in-fighting, spiralling costs and long delays, but after eight years of work, the Phoenix rose from the ashes and the theatre finally re-opened for its first full season in December 2004 with a production of Verdi’s La Traviata. The building has been faithfully reconstructed in nineteenth century style and the sumptuous interior is once again resplendent with gilding and Baroque decorations.

Until the mid-1800s, the only way of crossing the Grand Canal on foot was via the Ponte del Rialto, which dates from 1588. Today’s wooden Accademia Bridge was built in 1932 replacing an older iron construction while the Ponte degli Scalzi near the train station was also originally built in iron and substituted in 1934. A new bridge, designed by Santiago Calatrava, has been opened in 2008 and bears the name Ponte della Constituzione (‘Constitution Bridge’).

Described by its architect as a ‘shining path of light’, it links a point near the train station to Piazzale Roma. But if you want to join the locals, catch one of the ‘traghetti’ (gondolas that have been put out to graze) that ply back and forth across the canal; just hand 40 cents to the boatman and stay standing, legs well-braced; only tourists sit down.

One of Venice’s genuine hidden gems, Palazzo Contarini del Bovolo is tucked away in a tiny courtyard near Campo Manin. The building sports Giovanni Candi’s 1499 whimsical external spiral staircase whose stone balustrade and elegant arches swirl upwards to a height of five storeys. Climb to the top for a close- up view of the neighbourhood rooftops and altane (wooden roof terraces).