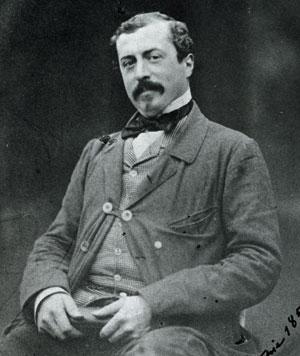 The founder of the Wallace Collection, Sir Richard Wallace, would have turned 200 this year.

To mark the occasion, the Collection launches its flagship exhibition, Sir Richard Wallace: The Collector, which collates some of the most idiosyncratic and diverse works of art he acquired over his lifetime.

The exhibition, which runs from 20 June 2018 until 6 January 2019, will highlight Sir Richard’s considerable philanthropic legacy, as well as explore the many facets of this extraordinary and largely undiscovered man.

Featuring twenty works of art collected by Sir Richard, it will make use of the Collection’s £1.2 million exhibition space to emphasise the collector’s unprecedented contribution to the nation’s cultural heritage.

The supposed illegitimate son of the Fourth Marquess of Hertford, Sir Richard Wallace unexpectedly inherited the Marquess’s dazzling collection of art, which changed the direction of his own life and that of the masterpieces in his care.

A major international philanthropist and cultural luminary of his time—yet also an enigmatic and private individual—Sir Richard believed in sharing his inheritance with a wider audience.

He was also an avid collector—adding extensively to the Collection prior to his death in 1890.

The exhibition explores Sir Richard’s eclectic tastes and highlights some of the museum’s unexpected treasures, including a gold trophy head from the Asante Kingdom, imperial ceremonial wine cups from China and a majestic ostrich figure made by the Augsburg silversmith Elias Zorer, plus spectacular examples of arms and armour, jewellery and more.

During this bicentenary year, the Collection will also host a full programme of events and family activities, ranging from Muso: Singing Wallace to Life, a site-specific performance by theatre company Impropera to The Knight in Art, a four-week course inspired by Sir Richard’s passion for collecting arms and armour.

Throughout 2018, the Collection’s Treasure of the Month series focuses on artworks collected by Sir Richard, with associated talks from curators and a Sir Richard Wallace Trail throughout the museum, plus monthly film screening exploring the world in which he lived.

Admission to Sir Richard Wallace: The Collector is free, and visitors are encouraged to use the #RW200 hashtag on social media.

Naked Trump Statue to Be Sold at Julien’s Auctions