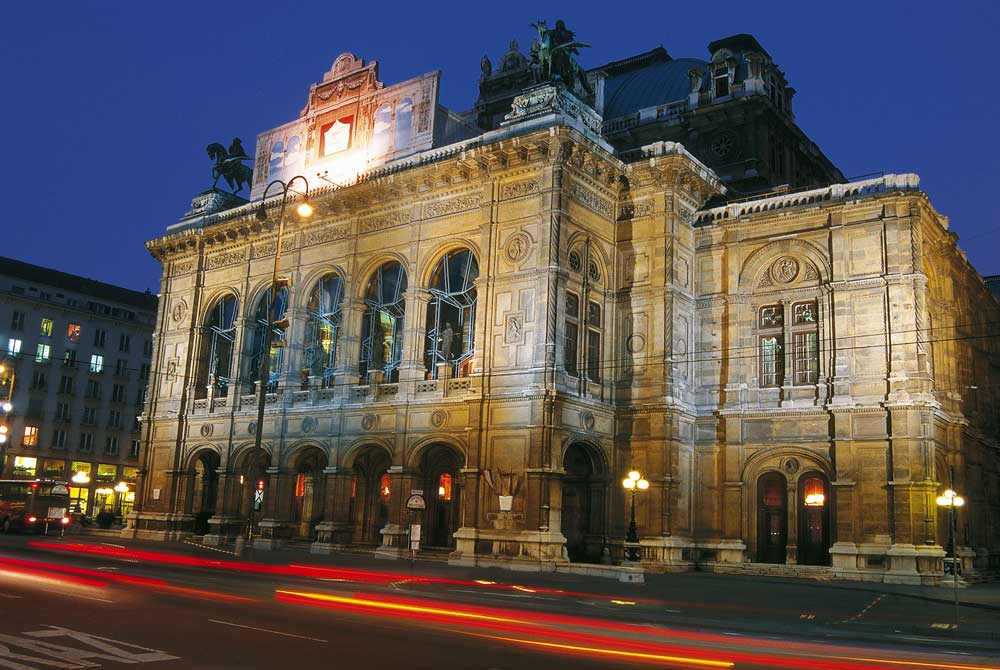 Not for nothing is Vienna known as Europe’s cultural capital: it has an abundance of cultural riches, from art to architecture and music. But as well as getting a fill of culture, make sure to sample a delicious cake or two, another great Viennese tradition.

Vienna is the city of grandeur par excellence, as befits a centre of both the Holy Roman Empire and, afterwards, the Austro-Hungarian Empire. The locals dress smartly, cross the road only when the traffic lights show a green man, and eat delicious cakes in coffee houses.

This mindset is shaped by the architecture, which traces the city’s rich history. There is the medieval core, surrounded by the Ringstrasse, a long ring-road replete with nineteenth-century Renaissance-style buildings. Dotted throughout the city are gems from two of the great periods of European culture, the Baroque of the seventeenth century, and Art Nouveau of about 1900.

Within these walls pulsates one of the richest concentrations of culture in the world. Dozens of museums jostle for attention, many boasting some of the key achievements of European art. Among the churches, concert halls and opera houses resonates a classical music scene whose excellence might be expected from the home of Mozart.

The medieval heart of Vienna is Stephansdom—SAINT STEPHEN’S CATHEDRAL.

Sublime in its huge towers yet delightful in its intricate decoration, it conjures up vividly the Gothic era when most of it was built (1263-1433). Try to go at 9am on the dot to have the echoing, eerie but superb interior almost to yourself. Between its treasury, the views from its tower and its dramatic high altar of 1640, there is a huge amount to see. Best of all is the stone pulpit of 1500 near the beginning of the main isle. The carving shows saints whose faces are not boringly holy but straining with emotion and realistic features, while the banisters have (carved!) lizards running up and down – this would be the star attraction of any museum.

On the culture trail

A star attraction of the city is GUSTAV KLIMT’S THE KISS (1907-08). The linear patterns and gold paint recall old Byzantine art, but the intensity of these lovers’ bodies was shockingly new when first made—and still is. The mix of traditional workmanship with a taste for the future in about 1900 can go by the names of Art Nouveau or Jugendstil, but the preferred name in Vienna is Secession. This Klimt is on show in the Belvedere Museum, whose eighteenth-century façade hides inside perhaps the world’s greatest collection of Secession painting—many more Klimts as well as expressionist nudes by Egon Schiele.

The Secession also encompassed furniture. The twisted, snake-like looping lines of the chairs was strikingly new – yet they were made by the time-honoured practice of bending the wood with the help of steam. This gives the aesthetically satisfying result that a single loop can be made of just one piece of wood. For these, visit the MAK museum.

For ARCHITECTURE, not to be missed is the Secession building, which displayed the works of these forward-looking artists. Designed by Joseph Maria Olbrich, it also audaciously challenges the past. Block-like sections of the façade recede into themselves, and at the centre is a dome of gold laurel leaves, which flaunts tradition by having empty space between the branches, so you can see through it. Inside is a superb frieze by Klimt.

The imperial core of the city is the Hofburg, the enormous complex inside the south-west part of the Ringstrasse, which once housed each emperor, and is now a multitude of museums. A series of different buildings dating from the Middle Ages to the nineteenth century, the Hofburg is itself a history of the city. Of the many museums, you must be sure to visit the TREASURY (Schatzkammer). Amassed mainly by Ferdinand I (1503-64), the collection includes the pearl-en- crusted crown of the Holy Roman Emperor, of 962.

The unexpected extra highlight of the Hofburg is the SPANISH RIDING SCHOOL. Immaculate white horses, rode by men in traditional costume, jump, click their hooves and pirouette in a sort of animal ballet. Far harder than showjumping, it is a ritual perfected after French horse-trainers fled the 1789 Revolution to Vienna. The quality of the horses, however, dates back to 1580 when Archduke Karl founded a horse stud, where he bred Spanish thoroughbreds—hence the name of the school.

The Viennese have always loved their greatest musician, Mozart, but in 2006, his 250th birthday, the city is pulling out all the stops. A major expansion project has taken place at the MOZARTHAUS, the museum that occupies his only surviving home. Located a few steps away from Stephansdom, it consists of a bedroom, study and other rooms, wrapped around a staircase shaft.

He lived there from 1784 to 1787. The space has always enjoyed a hallowed quality, as the visitor stands in between the same four walls where Le Nozze di Figaro was written. Now there is a whole museum of Mozart’s life on the second and third floors, which includes original artefacts such as a trombone from Mozart’s time.

Since the whole of Vienna is permeated with Mozart’s history, the city itself has been turned into a museum in a clever initiative named ‘Calling Mozart’. As you walk around, look out for red posts with those words printed on them. Using your mobile phone, you can access an instantaneous audioguide—the street Rauhensteingasse may seem like any other, until the red pillar explains that it is the site of Mozart’s last home.

The best way to appreciate Mozart is, of course, to listen to the music. A fun way to re-enter Mozart’s world is to attend a concert where the orchestra and singers are in period dress—think white wigs, bright frock coats and buckled shoes. Look out for these at the Musikverein venue. For those who like their music to be purely an affair of the ear, normal concerts can be found everywhere from the opera house to small churches.

The big surprise of the Kunsthistorisches Museum—Austria’s national gallery—is the outrageously rich collection of paintings from Renaissance Venice. The museum boasts three of the only five authenticated paintings by the early sixteenth-century master Giorgione, namely Laura, a saucy portrait of a woman wearing laurel wreaths in her hair, the Boy with an Arrow, and the mysterious but radiant The Three Philosophers. This richness is thanks to the dominance over northern Italy enjoyed by the Habsburg family, the dynastic rulers of the Holy Roman Empire.

And there are fantastic collections of almost everything else. Rembrandt’s large Self-Portrait seems not only to describe the forms of the face, but to sculpt them with the lumpen paint. Most exciting for anyone who has not visited in the past two years are the antiquities galleries, which have been reopened after a luxurious makeover.

The Viennese like grandeur, but they also have a soft spot for things that are comforting and homely. They even have a special word to describe it: gemütlich. Think of taverns of old, warm fires and friendly faces. To experience it, try the restaurant Brezlgewoelbe, just off Judenplatz. Here, heavy wooden tables in vaulted cellars are dimly lit by candles. The house beer has a bitter hops taste cut perfectly with a subtle sweetness. The boiled beef with horseradish casts you back into an old rural world, away from the local bustle.

Bewitched by the opera

How could I be so stupid? I arrived in Vienna without having booked a ticket for the Staatsoper, the national opera house. Vienna’s musical scene has been nourished by the brilliance of Mozart and lashings of funding in the nineteenth century by Emperor Franz-Joseph, and the Staatsoper is considered the best in the world. The instruments are resonant, they are played faultlessly, the lead singers have piercingly emotional voices, and there is no skimping on numbers in the huge choruses.

When I heard that the tragic medieval love story LOHENGRIN by the great Romantic composer Richard Wagner was to be performed that night, I knew I had to get a ticket – but how, since it was sold out? It turns out that standing-room tickets go on sale an hour before the performance—so I sped off to buy one. It was worth it. Over and above the quality of the music, was the clever set with a lime-green church and trees made of black slats, which seemed both contemporary and timeless.

There was also the performance of pure evil for Ortrud, the witch who contrives to split up the lovers Lohengrin and Elsa. I shuddered when Ortrud raised her arm in victory as she saw that she had cast doubts in the mind of Elsa. To ensure your victory in getting the best place to stand, tie a ribbon to the rail, as the locals do, and go for a coffee – or better, book a seat well in advance!

The Viennese pride themselves on being civilised, stately and grand—and central to that lifestyle is torte, or cake. My favourite is mohntorte, whose aromatic taste comes from poppy seeds. There are even more grand cafés than there are varieties of cake, with the café at the Hotel Imperial particularly splendid. The Hotel Imperial has its own signature cake—the Imperial Torte—a delicious square chocolate cake with delicate layers of marzipan and almonds, rumoured to have been created by a young apprentice chef at the court of Emperor Franz Joseph I. For everyday life, however, try Café Schwartzenberg on Schwartzenbergplatz. Here, you can sit among oak panelling and marble tabletops, reading the papers or watching the city’s business community drop in.

Vienna’s cultural richness extends right up to the present. It is impossible to do justice to the breadth of what is on offer, but no one should miss the Ludwig Museum, generally known as MUMOK, or the Kunsthalle. But for a more direct integration of old Vienna with the present, visit Judenplatz. Here there is a sculpture by the British contemporary artist Rachel Whiteread: a huge concrete cast of the inside of a library. Its function is the city’s Holocaust memorial. This moving (if sobering) monument shows how Vienna is again embracing new art—as it has done for a millennium.

Anyone who has not visited Vienna recently is in for a big surprise—a new world-class Old Masters museum. The Liechtenstein Museum in the suburb of Rossau is the historic residence of the Princes of Liechtenstein, completed in 1702. The family still own it, but they have opened it to the public to show off its fantastic collection. There are tapestries by Rubens, sculptures by Giambologna, and—perhaps the most moving work of all—a dynamic Saint Sebastian by Andriaen de Vries.

Vienna’s hidden secret is the colour and dynamism of the interiors of its Baroque churches, designed at a time when the Church wanted to use everything it could to pull at the heart. They might seem dour from the outside, but don’t be fooled! My favourite is the Jesuit church (at Dr- Ignaz-Seipel-Platz), where huge, curly, bright green marble pillars complete a room of absolute decadence.

Vienna’s citizens have many reasons to be proud of their city (an old Viennese folk song states, ‘Vienna, Vienna, you alone shall be the city of my dreams…’). One source of pride for more than 160 years is the Vienna Philharmonic Orchestra, described by Richard Wagner as being one of the most outstanding in the world. The New Year’s concert, which now broadcasts to more than 50 countries, is a popular Philharmonic tradition; see www.wienerphilharmoniker.at for more details.