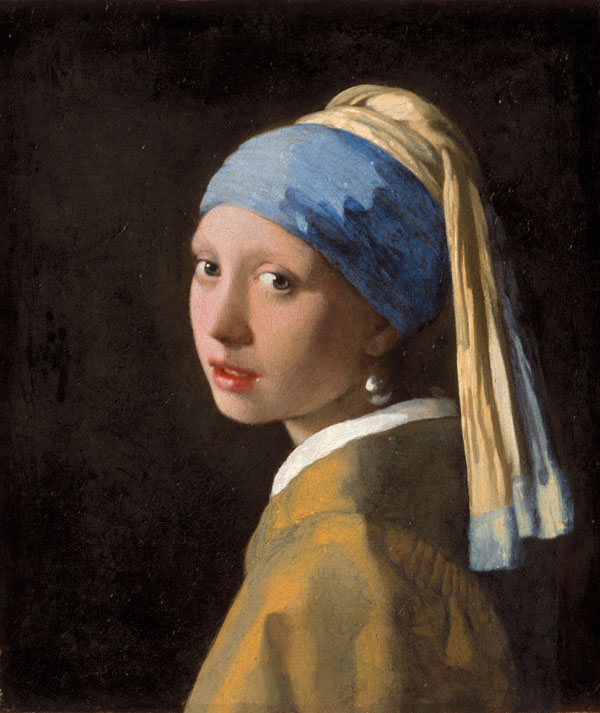 More then three centuries passed before Vermeer became recognised as a great artist. His most famous painting, Girl with a Pearl Earring, is now one of the most popular pictures in the world. This iconic portrait has recently returned home to the newly reopened Mauritshuis, The Hague, following two years of exhibition stops around the world.

Extraordinary to think that a painter neglected for centuries should not find his true place as one of the world’s most popular artists until the 20th century, a later time when every exhibition of his work has had people queuing twice around the block. This is, of course, the 17th century Dutch painter Vermeer, whose skill in capturing that special moment in time is just one of the reasons for his huge appeal today.

There remain many questions about Vermeer’s paintings that may never be answered. Why did this great painter remain neglected for almost 300 years? With the small total of just 36 authenticated works to survive, is it likely there were others? So here is another art mystery that remains unsolved today: what happened to the other paintings Vermeer must have produced, and why was Vermeer forgotten for so long? And how did Vermeer then become one of the world’s most treasured artists? This last development can at least be explained, as you will see.

To help capture and plot these compositional ‘moments’ onto canvas, Vermeer was believed to have used a camera obscura, a mechanical optical device made popular with artists throughout the 17th century. The National Gallery, London, explains the mechanism used at that time by stating, ‘the camera obscura consisted of a lens attached to an aperture on the side of a darkened tent or box. Light reflected from the chosen subject outside of the box passed through the lens and was projected onto a surface on a much smaller scale inside the encased area. The subject could then be traced.’

Despite this innovation, together with his masterly technique, soon after his death in 1675 Vermeer was quickly forgotten, why, we may never know, and for centuries some of his paintings were even attributed to other artists. Today just 36 authenticated paintings by Vermeer have survived, with, very recently, the 36th painting having been authenticated by Christie’s experts. This is Saint Praxedis (1665), and it is said to be Vermeer’s earliest surviving work. It was only in June of this year that Christie’s were ‘thrilled to announce’ the upcoming sale of the newly authenticated work, which subsequently sold on July 8, 2014, for £6,242,500.

For many years Saint Praxedis posed a vexing question: was it indisputably by the hand of Johannes Vermeer? Over many years there were several art experts who doubted the painting’s authenticity. However, modern identification methods have since become so sophisticated and so accurate that the results of recent technical analysis of the painting’s materials, conducted by the Rijksmuseum in association with the Free University Amsterdam, endorsed Vermeer’s authorship of the picture.

The laboratory tests established not only that the white lead used in the paint is consistent with Dutch painting of the time, and proved incontrovertibly the painting was not Italian as some suggested, but also revealed a precise match with another established early painting by Vermeer—Diana and her Companions, in the collection of the Mauritshuis, The Hague. The match even suggested that the exact same batch of paint had been used for both paintings.

Of the 205 exhibitions to date that have included works by Vermeer (the first exhibition was not until 1838) the works only appeared irregularly during the ensuing years, and then only in very modest numbers—mostly in ones and twos – and just occasionally eight or nine would appear together (1935, Amsterdam and Rotterdam). Not until 1996, however, do we have the first major exhibition of Vermeer’s work, one that gathered together 23 paintings in a hugely successful exhibition at The Hague’s Mauritshuis.

So, we have a void of 300 years before Vermeer had stepped from 17th century shadows onto the 20th century world stage.  Together with the small exhibitions that occurred in the 19th century, respect, recognition and admiration began to grow for surviving paintings as they gradually became acquired by national museums (see the list: ‘Where to See Vermeer’s Paintings’, below). One art expert in particular championed Vermeer. This was the painter Sir Laurence Gowing (1918-91), whose classic study (Vermeer, 1950) made a significant impact on the art world. Reviewing the book in 1952, the critic E.H. Gombrich wrote: ‘He [Gowing] is a painter in his own right and one, moreover, who can write lucidly and intelligibly about his craft. In this well-produced book he uses his rare combination of gifts with impressive success.’

Today, Vermeer’s most popular painting is recorded as being Girl with a Pearl Earring c.1665-67, restored 1994. This painting has double the popularity rating of any other works by Vermeer. The popularity of this particular portrait increased significantly following the release of the film with the same name, directed by Peter Webber and starring Scarlet Johansson and Colin Firth, among others. Released in January 2004, the film script is based on the novel by Tracy Chevalier.

The soaring popularity of this particular work by Vermeer, in addition to the film, has been helped along by a stream of commercial posters, reproductions, jigsaw puzzles and postcards—Amazon even offers: ‘Paint with Pete: Paint the Masterworks—the book that will guide you through the process of painting this baroque masterpiece by Vermeer.’

But if you want to see the real thing, you must visit the Mauritshuis in The Hague, where Girl with a Pearl Earring has just returned home to much celebration following a two-year round the world trip that included Japan, the USA, and one last stop in Bologna (May, 2014).

It was in June, 2014, that King Willem-Alexander of the Netherlands reopened the Mauritshuis after a two-year multi-million euro makeover. Reporting on the reopening, the Museum proudly informs us, ‘with much spectacle and fanfare, Vermeer’s world-famous painting Girl With a Pearl Earring was symbolically welcomed back to its own museum.’