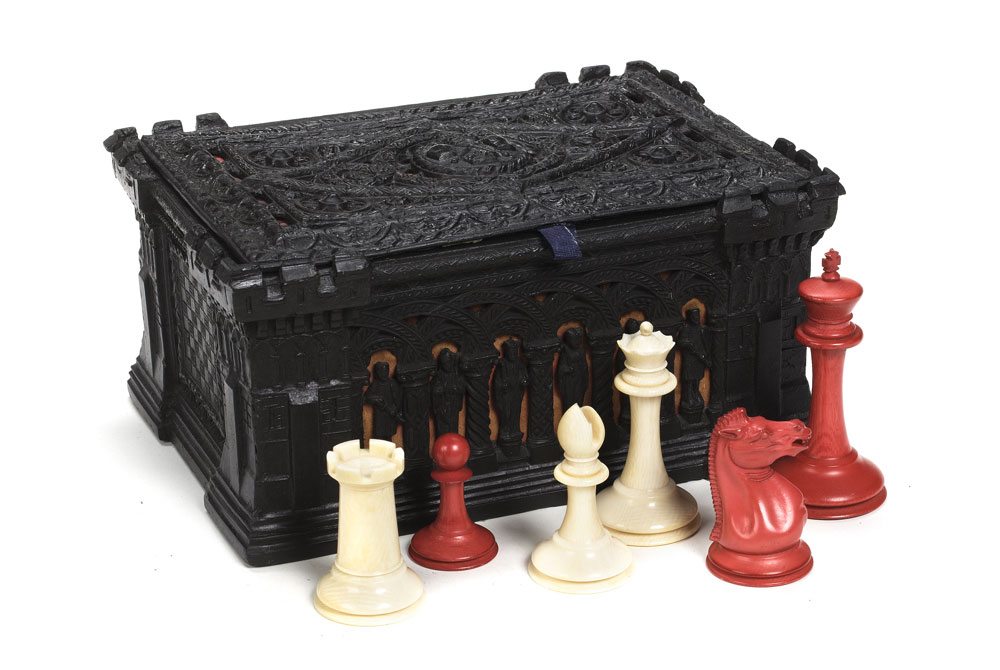 In the age of enlightenment the game of chess was central to café society in Paris. Here, composers such as Rameau and philosophers such as Denis Diderot gathered at the Café de la Régence to discuss the issues of the day, drink coffee and chocolate, and of course watch and comment upon the games of chess. It was at la Régence that the greatest chess players gathered—Légal (1709-92) and his more famous protégé François-André Philidor (1726-95)—astounded onlookers with elegant defensive play and queen’s sacrifices that usually led to a crushing and unexpected defeat for the hapless opponents.

Although a centuries’ old game, it is the legacy of this French style that continued to fascinate generations and caused the game of chess to blossom in Europe, America and of course Russia (where chess is part of the national curriculum). The differing fashions and tastes have led to a great variety of chess set designs which in turn makes these pieces very desirable and collectable.

By the mid-nineteenth century, the more serious players favoured chess sets that were designed by Nathaniel Cook in 1849, and named in honour of the English chess master of the day, Howard Staunton (1810-74). The Staunton design was soon to be crafted in fine, weighted sets by Jaques of London, and this Staunton design, with very little variation, has been the standard design ever since, for both amateur and professional players because the pieces are stable, good to look at and easily identifiable. (Jaques of London, incidentally, also produced Tiddley-Winks, Snakes and Ladders, Ludo, and Happy Families.)

Several of these antique Staunton chess sets came up for sale at an interesting auction in September in London from Bonham’s, a sale that also offered some early and unique sets of playing cards.

Early Staunton sets of the 1850s, in excellent condition, command high estimates of  £2,000-3,000 for weighted boxwood and ebony pieces, but ivory sets may fetch £7,000-8,000 or more, especially if the chess set also has a mahogany case containing the sought-after Staunton label. However, it is still possible to buy a later nineteenth-century genuine Staunton chess set for around £400-1,000 and, not to say that every collector’s purchase is an investment, this will be, I believe, an area where prices will continue to rise as early Staunton sets become scarcer and scarcer on the market.

For collectors, this sale also offered some quirky sets that proved irresistible to the chess set addict. One such was Lot 45, a ‘Mary Chess’ scent or perfume bottle glass chess set, estimated at £2,000-3,000. The twentieth-century, gilt and silver heightened set contained the unopened glass bottles with the original scents or perfumes, kings and queens with crowns, bishops with mitres, knights with horses’ heads, rooks with battlements, pawns with finials. It comes in a velveteen covered presentation case, with drawer beneath, the Mary Chess Royal Warrants to the inside of the silk-lined lid, and the original embossed card box, with a ‘Mary Chess’ glass and ‘silvered’ chess board.

It is accompanied with a letter from The Queen Mother’s lady-in-waiting, Olivia Mulholland, to Mary Chess Ltd; an associated typed letter from the Queen Mother’s comptroller, Sir Alastair Aird, thanking Mary Chess Ltd for the ‘magnificent chess set’, and a further letter from Elisabeth Olsson, lady-in-waiting to Her Majesty, The Queen of Sweden, thanking Mary Chess Ltd for the ‘useful and wonderful products…which you had the great amiability to present their Majesties’. The king is 16cm high, the pawn 9.3cm high and the board 50cm wide.

Then there was the chess set from Japan, Lot 136, an ivory netsuke chess set. The Japanese set, dating from the late nineteenth/early twentieth century, is estimated at £5,000-7,000. One side is stained a yellow or light brown, the other side left natural. The kings are as rulers, queens holding fans, bishops as priests, knights as Samurai warriors, rooks as pagodas with stepped roofs, pawns as figures from Japanese mythology, and each chessman with maker’s signature. The king  is 7.3cm high, the pawn 3.5cm high.

Acquiring a fine chess set is a great pleasure, a pleasure outmatched only by playing chess with a well-matched opponent—and why not play through one of Légal’s or Philidor’s eighteenth-century often devastatingly short masterpieces? You’ll be amazed by their elegance and brilliance.