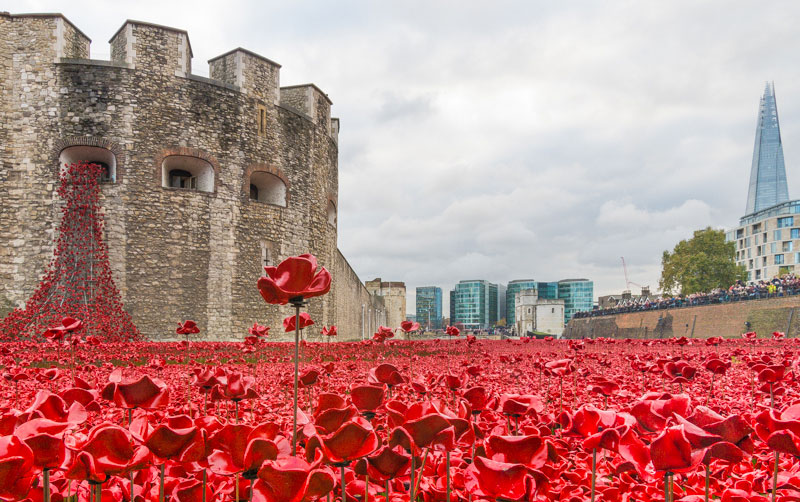 The Tower of London’s ceramic poppies, used in a Remembrance Day art display in 2014, are part of a new project called: Where Are the Poppies Now. Headed by 14-18 NOW, the U.K.’s art programme for the First World War centenary, the project seeks to pinpoint the poppies on a digital map.

Many will recall the Tower of London’s inventive and heartfelt installation back in 2014—Blood Swept Land and Seas of Red—a collaborative effort from artist Paul Cummins and designer Tom Piper. Masterfully crafted red ceramic poppies were used to cover the Tower of London to commemorate those lost in World War I.

The Tower of London’s ceramic poppies display included 888,246 poppies, one for every British or colonial life lost on the front line during the war. Spanning across the Northwest moat of the tower, vibrant red flowers spilled from the battlements as far as the eye could see. The iconic project captured the imagination of the public, attracting immeasurable crowds daily. In fact, over five million people in total reportedly attended the event.

After the Tower of London art installation ended, the public was given the chance to purchase the ceramic poppies to raise money for various charitable causes.

Those who bought a poppy can now join the new display and mark the location of it on a digital map. The project has been made possible through Google Maps APIs, allowing the map to be digitised and shared on a global scale. The website geo-locates your position and automatically shows poppies that are nearby. Teams behind the campaign hope to preserve the stories from the original 2014 installation whilst creating an everlasting archive.

The fascinating new project has already been hailed as a hit. People from far and wide have begun sharing their poppies’ location and relating their motivations for buying them. Reports have shown some ceramic poppies travelled to the furthest regions of the globe such as the U.S.A. and Australia. Some have even been tracked to the war graves of certain relatives, reminding us of the emotional poignancy of the original installation.

‘The digital manifestation is reuniting the original poppies, which will never be physically together again,’ remarked Jenny Waldman, Director of 14-18 NOW. Their aim is apparently to track each poppy down by encouraging their owners to use the hashtag #wherearethepoppiesnow and share their personal experiences online.

‘The interactivity of the project means that people can personalise their responses, connecting a global conflict from 100 years ago with our world today,’ Waldman added.

14-18 NOW are currently touring the U.K. with two other sculptures that came from the Blood Swept Lands and Seas of Red—Wave and Weeping Window. Wave consists of an archway of bright poppies held up by looming stalks. Weeping Window involves thousands of ceramic poppies cascading from a window to the ground beneath.

In a period of global instability, such projects are seeking to connect people across the globe by encouraging us to reflect on those who have been lost to war.

If you have enjoyed reading this article: ‘Tower of London’s Ceramic Poppies Are Part of a New Project’, click here to read more on Arts and Collections about how artists in history became famous.