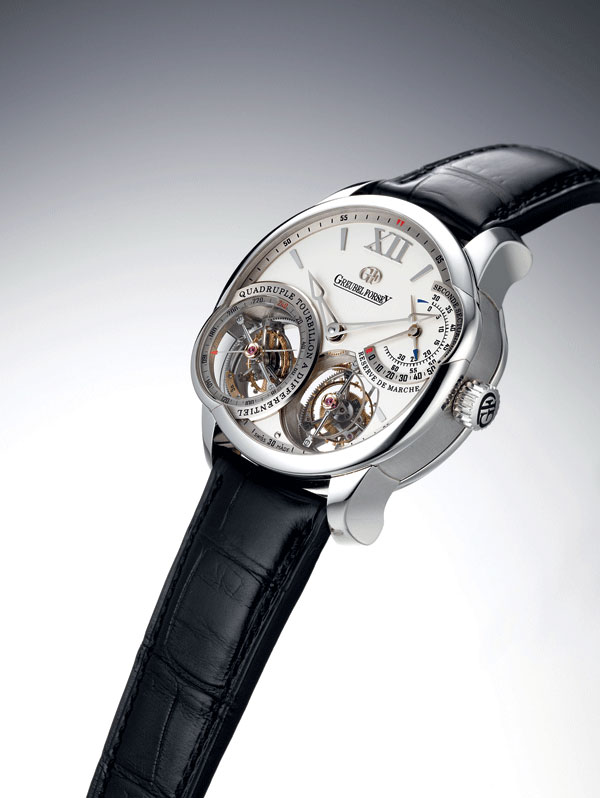 Exceptional tourbillons and bejewelled timepieces by master craftsmen from houses such as Patek Philippe and Cartier have come under the hammer at Sotheby’s in October.

Sotheby’s Hong Kong once more witnessed the sale of the most exquisite and rare watches that horology has to offer.

Leading the sale was the Patek Philippe Sky Moon Tourbillon, a model similar to one that set a world auction record for any modern timepiece at Sotheby’s Hong Kong in 2008. Following the success of the last season, the sale also highlighted an extraordinary selection of watches in immaculate condition and rarely seen in the market.

These ranged from highly coveted Patek Philippe minute repeaters to exceptionally complicated tourbillons, exquisite bejewelled wristwatches as well as decorative enamel watches of impeccable craftsmanship. Offering over 420 lots, the sale achieved a total of HK$120 million / US$15.6 million, the highest ever total for a sale of Important Watches at Sotheby’s worldwide.

Charles Tearle, Head of Watches, Sotheby’s Asia, said: ‘Sotheby’s watch department are very proud of creating such a diverse and impressive selection of important watches, not only from established brands such as Patek Philippe and Cartier, but also the independent manufacturers that rarely appear at auction including Gruebel Forsey, MB&F and F.P.Journe. All sourced within Asia and offered in excellent condition from private collectors, the highlights of the sale include a selection of the most important modern collectible watches available.’

Although the highlights focused on the rare and exceptional, Sotheby’s have included a wide variety of brands that appealed to a broad audience.

The highlight of the sale was the extremely rare Patek Philippe platinum double dialled wristwatch with 12 complications including minute repeater, tourbillon, perpetual calendar and many more extras. It is one of the last of its kind and achieved HK$10.52 million / US$1.35 million at auction.

History was made when a Patek Philippe Sky Moon Tourbillon sold for HK$11,751,500 / US$1,503,839 at Sotheby’s Hong Kong in April 2008, setting a world record for any modern wristwatch at auction. The Patek Philippe Sky Moon Tourbillon has been the company’s flagship wristwatch since its release in 2001. Launched as the world’s most complicated wristwatch, the model was manufactured in extremely limited quantity and reserved for Patek Philippe’s elite clientele who were allowed to purchase it only after undertaking a qualifying interview.

With the model discontinued in late 2011, this platinum version from 2010 was one of the last Sky Moon Tourbillons made, as well as the first to appear at auction featuring the Patek Philippe quality seal and fitted with the rare red date indication hand. The Sky Moon Tourbillon not only defined the company as it moved into the new millennium and dominated the industry, but also embodies the entire watch market of the last decade in which demand increased for larger case proportions and more technical complications. A milestone in the history of watchmaking, the Sky Moon Tourbillon has proved a benchmark all other companies strive towards and will be the crown jewel of any refined watch collection.

Fresh to the auction market, the Opera Three is the latest offering from Girard Perregaux’s flagship line of haute horlogerie and the brand’s first musical wristwatch. It sold for HK$1.58 million / US$203,000 and was offered in a platinum case of traditional style with constraint proportions.

The complexity of the mechanism is hidden from view while the watch is worn. Fitted with an entire miniature music box within the movement, this marvellous creation allows the wearer to listen to a selection of music—Mozart’s A Little Night Music or Tchaikovsky’s No Great Love—played on demand, every hour, or not at all. A delightful treasure of great amusement for the true connoisseur.

Cartier has had a long history of creating iconic animal-themed jewellery and bejewelled timepieces featuring beautiful creatures from felines to eagles, especially for royalty and celebrities. This season Sotheby’s presented a splendid example with impeccable craftsmanship that delighted watch and jewellery connoisseurs alike.

This Cartier unique edition lady’s white gold and diamond-set eagle bangle watch sold for HK$3.62 million / US$466,000, almost twice its estimated sale price. Crafted in the form of a dazzling stooping eagle, this magnificent and detailed bangle watch offered this season is a unique piece made in an 18k white gold case and set with diamonds totalling over 42 carats. Offered publicly for the first time, this stunning work of haute horlogerie combined with jewellery presented a unique opportunity to acquire a piece of Cartier’s glamour and tradition.

A very fine and probably unique lady’s platinum sapphire and diamond-set bracelet watch with concealed dial 1967 was sold at auction for HK$1.16 million / US$149,628. With a total diamond weight of approximately 10cts and a total sapphire weight of approximately 15cts, this watch achieved almost twice the estimated price. The combination of platinum, diamonds and sapphires, particularly in such magnitude, was rarely used by Patek Philippe in the 1960s and this lot was probably created as a special request by an important client. The sapphire-set cover is hinged revealing the dial underneath.