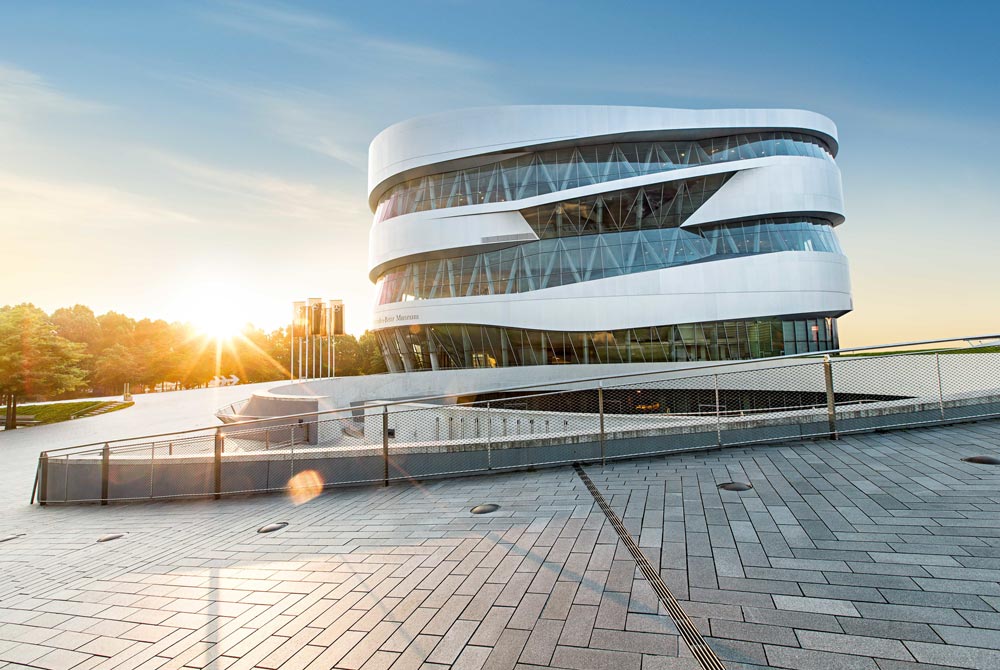 If any one object is synonymous with the modern age it’s the car. Symbols of power, dynamism and speed, they’ve become representative of many concepts, from personal freedom to social status, as well as potent cultural icons of style and attitude.

There are numerous car museums you can visit that explore the rich, complicated history of the motorcar, and many of them look as aesthetically pleasing as the machines inside them.

Subtlety was not what architects Kohn Pederson Fox had in mind when they redesigned the façade of the Petersen Automotive Museum in Los Angeles, and anyone walking past the busy corner of Fairfax Avenue and Wilshire Boulevard will not fail to spot this striking architectural statement.

A red box-like structure encased in a cage of fluid, undulating steel lines that mimic the movement and form of a car, this new look has divided critics since it was first unveiled in 2015. Founded in 1994, the car museum aims to explore the history of the automobile and its impact on American life.

To do this, they’ve devoted three floors and 28 galleries to a collection that includes gems such as a 1971 DeTomaso Pantera riddled with bullet holes fired by its former owner, Elvis Presley, and a Ferrari 308 GTS driven by Tom Selleck in Magnum, P.I.

On the eastern fringes of France in the provincial town of Mulhouse, the Cité de l’Automobile is a fascinating car museum that’s well worth a visit. Approached via a footpath across a canal, the impressive entrance, designed by Studio Milou in 2006, is a vision of glass, wood and steel, with an arresting display of suspended cars and animals hanging vertically alongside the door.

The car museum is a Bugatti lover’s dream thanks to the Cité’s founders, the Schlumpf brothers, who amassed 122 of them alongside other rare and sought after vehicles that include a varied collection of early motorcars.

In contrast to the slick modernity of many car museums stands the delightfully quirky edifice of the Louwman Museum in the Netherlands. Architect Michael Graves & Associates created a traditional building for the oldest private car museum in the world, with dormer windows, peaked roofs and basket weave-patterned brickwork. Inside discover a collection of 250 vehicles, from the first patented motor car, built by Karl Benz in 1886, to James Bond’s original 1964 Aston Martin DB5, machine guns and all.

Architectural statements don’t get bolder than the curiously graceful monolith of Stuttgart’s Porsche Museum, which appears to ‘float’ above the ground, thanks to a clever support system of just three V-shaped columns. Designed by Vienna’s Delugan Meissl, the car museum looks different from every angle thanks to its polygonal form and the variations in structure and windows. Inside, you’ll find around 80 vehicles that chart the history of Porsche, from its early days right through to 2016.

The futuristic structure of the award-winning Mercedes-Benz Museum, also in Stuttgart, is based on a double helix — a complex, continuously flowing design that has no closed rooms or straight walls, just loops turning endlessly back into themselves. Routes through this car museum intertwine on nine different levels, documenting the storied history of the motorcar.