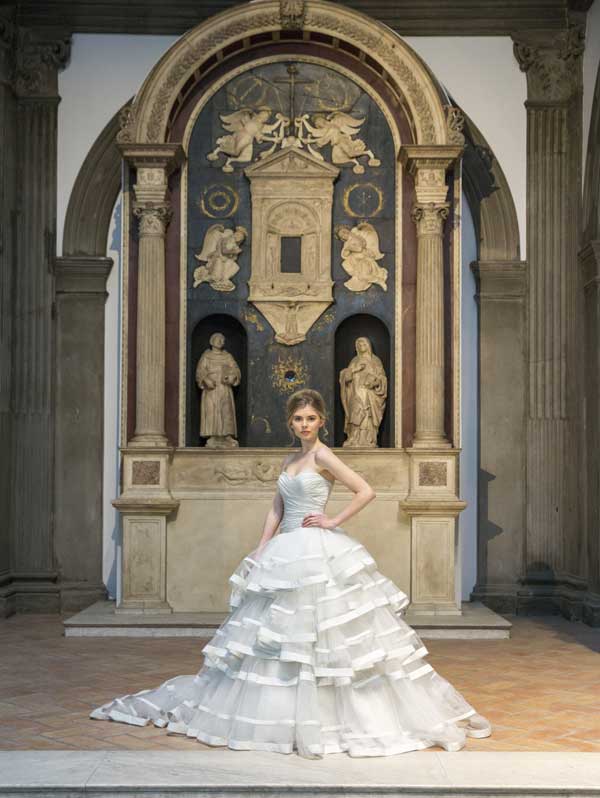 From elaborate 18th-century ball gowns to cutting-edge designs worn by the likes of Kate Moss and Gwen Stefani, a unique collection of wedding dresses traces the changes in traditional wedding attire over the past 300 years.

Shimmering with thousands of hand-stitched golden sequins, Kate Moss’s wedding gown, the creation of fashion designer John Galliano, takes centre stage at the Victoria & Albert Museum’s wedding dresses exhibition. Wedding Dresses 1775-2014 toured Australia, New Zealand and Singapore, attracting over a quarter of a million visitors, before settling at the V&A in London. According to Edwina Ehrman, curator of the exhibition, the wedding dresses on display do more than reflect the contemporary fashion trends that inspired their designers.‘Wedding clothes, like other types of dress, reflect the societies that create and make ceremonial use of them. They can illustrate responses to technological change and shifts in the economy, and reflect changing attitudes towards the wedding ceremony and marriage,’ she explains.

The collection comprises over 200 garments and accessories that trace the history of matrimony from the late 1700s to the present, focusing particularly on the commercialisation of weddings and how the ceremony has been treated by designers.

The cutting edge designs of Vera Wang, John Galliano and Vivienne Westwood are integrated with other wedding fashion accessories, outfits worn by grooms and pageboys, photographs, television footage and even extracts from diaries written by the brides. Photographs proved a particularly rich source of information during Ehrman’s research, as they documented the commercialisation of weddings that gathered pace during the Victorian era.

‘Often displaying accessories that no longer survive, the images further our insight into the social aspect of dress—it’s relationship to the body, to class and social aspiration, and how women present themselves as “brides”.’Despite the ever-shifting influences that have inspired fashion trends over the past 300 years, weddings have remained a perennial source of fascination, and the wedding dress represents the focal point of that interest.

The exhibition focuses particularly on the growing preference for brides to select a white gown for the wedding ceremony. While white had often been the colour of choice for ceremonial occasions including weddings and christenings, the colour’s popularity as a choice for bridal gowns grew exponentially after Queen Victoria wed Prince Albert in 1840. However, the colour had always been a status symbol during centuries when laundry was a labourious task that had to be performed by hand. Delicate white outer garments also required extra skill to maintain, thus demonstrating the status of the wearer.

As well as showcasing a rainbow of wedding gowns, the pieces selected by Ehrman also demonstrate a broad geographical spread of traditional wedding garments. However, the majority of the pieces on display were designed and made in Britain. ‘The Museum’s focus on collecting objects that exemplify good design and high standards of manufacturing has ensured that many of the country’s leading couturiers and designers are represented,’ says Ehrman.

As such, the selection of garments in the exhibition not only traces the history of fashion, but also the history of the UK itself. The economic strain placed on the country during the Second World War, when clothing fabric was rationed, is reflected in the gowns that are on show. Resourceful brides during this time often turned to upholstery fabric to fashion their wedding outfits.

Gowns from the frugal decades of the early 20th century pose a sharp contrast with those from the latter half of the century, when the desire to infuse an element of fantasy into design superceded the traditional British preference for comfortable, practical clothing.

‘Some women used this opportunity [the wedding day] to introduce an element of fantasy into their clothes, and this British taste for dressing up can be seen in the popularity of romantic wedding styles which draw on the cut, construction and decorative details of the dress,’ says Ehrman.The 1980s is the decade that best mirrors this modern preference for the fantasy ‘fairy tale’ wedding, with the trend reflected in David and Elizabeth Emanuel’s design for Lady Diana Spencer’s wedding dress in 1981. Notably, the exhibition also comprises outfits worn by Christopher Breward and James Brook for their civil partnership ceremony in August 2006.

Philip Treacy, who has created bridal headdresses for women from the Duchess of Cornwall to fashion designer Selina Blow, stresses the important historical significance of wedding attire.‘It was a thrill to design a headdress for her [the Duchess of Cornwall] because it was a momentous, historic moment for everybody concerned,’ he says. Like many designers featured in the exhibition, Treacy acknowledges how the image of the modern celebrity bride plays a part in the design process.‘The difference with the latter [celebrity wedding ensembles] is that we see it, a lot, continuously, forever, so it is important that it flatters the wearer.’

As well as showcasing the historical relevance of the wedding gown, the exhibition focuses on the dynamic relationship between fashion, bridal couture and the cultured image of the bride herself. Ultimately, wedding dresses not only tell us the tale of what is in vogue, but the bride’s own personal story. The contemporary fashion element of the exhibition ensures that the role of the traditional wedding gown will remain relevant for generations of brides to come. •

The Power of Change

Eye of the Tiger