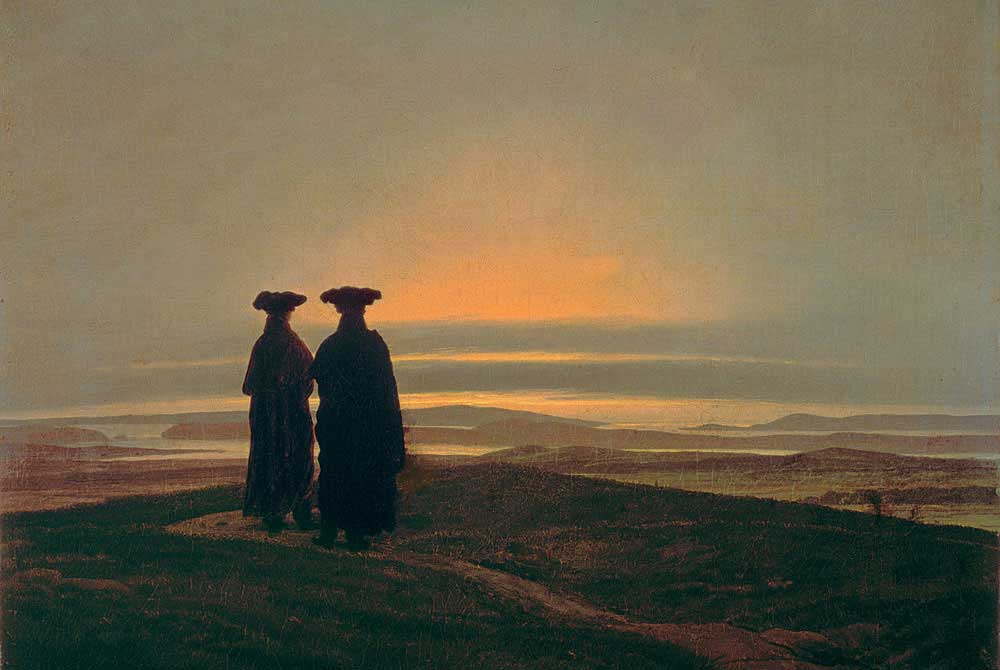 The sublime or the vision of the romantic imagination introduced a new era of creativity. Its powerful legacy brought with it a series of dramatic changes to art and culture.

A magnificent view is a spectacle that has impressed and pleased us ever since the development of our senses and sensibilities. By the mid-eighteenth century, it was the dramatic landscape that caught the imagination not only of painters but also of poets, writers, and composers. This romantic imagination became one of the most significant influences of the late eighteenth and early nineteenth centuries.

Why Distant Objects Please is the title of an article (or essay) written in 1822 by the father of modern journalism, William Hazlitt. It was a topic and an experience that had engaged the creative mind from the mid-eighteenth century for almost a hundred years.

But these distant objects did much more than please; they caused painters, poets, philosophers, and composers to become, to a spiritual degree, inspired by dramatic landscapes, seascapes and the power of nature itself. It was the age of the romantic imagination, heightened by what is known as ‘the sublime’. The power of the sublime was embraced by the youthful geniuses of the day, who tore themselves from the enlightened but formal style of the early eighteenth century and faced instead into the wild tempest of a new era of sturm und drang.

In the world of music Joseph Haydn is that rare example of a composer who straddled both these eras, from the formality of many of his early works then, with a giant leap, to the tension and drama of his later works such as The Creation (1798) and The Seasons (1801). Beethoven, too, was in the vanguard of change.

It was three years before his tutor, Haydn’s death in 1808, that Beethoven completed his Sixth Symphony, The Pastoral. This programmatic symphony reflects the new mood of the times, leading us from feelings of happiness on arrival in the countryside through to the mighty tempest in the fourth movement and on to a meditative and glowing finale, a glorious sunset. Schubert, too, during his short life was inspired by sublime landscapes and the forces of nature, none more so than in his melancholic song-cycle of unrequited love, Wintereisse (1827).

Fifty years earlier, in France, Jean-Jacques Rousseau had published Reveries of a Solitary Walker (written in 1776 and 1778), a work of philosophy and observation that was one more signpost towards what became the modern movement, with its metaphysical engagement with nature and landscape.

In Britain, engagement of the sublime had already taken hold. In 1757, Edmund Burke had published his Philosophical Enquiry into the Sublime and the Beautiful which influenced a generation, including Wordsworth and Coleridge who, together, were striding over the Quantock Hills, the Lake District, and other rural regions, marveling at the rocky outcrops, the tangled woodland, the foaming waterfalls, and the tranquil lakes. As Wordsworth stood above Tintern Abbey (1798) in Herefordshire, he wrote these famous lines:

“The sounding cataract
Haunted me like a passion: the tall rock,
The mountain, and the deep and gloomy wood,
Their colours and their forms, were then to me
An appetite; a feeling and a love,
That had no need of a remoter charm,
By thought supplied, nor any interest
Unborrowed from the eye.”

From the passionate poet on the rock, painters, too, reached out for the sublime. The German painter, Caspar David Friedrich (1774-1840), is one of the foremost representatives of this movement, and his pictures have a particularly strong appeal in our own century. Perhaps this is because Friedrich gives us not only his rich landscapes, he also frequently evokes a strangely mysterious and dreamlike quality, with the human figures he depicts turned away from the viewer, gazing intently into the far distance (Wanderer above the Sea of Fog); his pictures seem to tell a story (Chalk Cliffs on Rügen) that in turn inspires the viewer’s imagination.

The sixth child of a candlemaker, Friedrich had been born in the midst of Lutheran Europe—at Greifswald on Germany’s Baltic coast, as of 1774 ruled by Sweden. His training took place at the Academy of Art, Copenhagen, but by the age of twenty-four he was in Dresden. Although there are few details of his early life, it is known that it was at this time that he began the practice of log walks out of town into the countryside where he would begin his pen-and-pencil sketches.

Although Friedrich experienced early success and recognition as a master of the sublime landscape, in later life his pictures fell out of favour and out of fashion, to the extent that he died in obscurity in 1840.

The rise and fall and rise again of Friedrich’s popularity is a remarkable story. Following a hundred years of neglect, his pictures were revered once again in the 1930s and ‘40s by the Expressionist and Surrealist painters; the Nazi regime also embraced his work as—perhaps in the same sense as Wagner’s music—the pictures were thought to reflect the regime’s ideals. Consequently, Friedrich’s work fell sharply out of favour. So much so that in 1949, the art historian Kenneth Clark wrote that Friedrich “worked in the frigid technique of his time, which could hardly inspire a school of modern painting.” The painter’s reputation suffered still further when his stylistic landscape imagery was adopted by Hollywood film makers such as Disney.

It was not until the 1970s that we might say that Friedrich was “rediscovered”, when major exhibitions were staged in several capital cities, finally establishing the painter as one of the great German romantic landscape painters and the most important of his generation.

Since those 1970s exhibitions, there has been continuing popular acclaim for and scholarly interest in this enigmatic painter. The benefit has been several recent publications, one of the most notable being the superbly produced monograph by Johannes Grave, Caspar David Friedrich. Grave’s engaging and erudite commentary adds fresh insights into the painter and his pictures. The magnificent reproductions present us once more with the breathtaking landscapes and the giddy heights where, as viewers, we must steady ourselves at the cliff edge or lie flat on the ground to gaze down the precipice into Friedrich’s sublime world.

Read also on Color, Line, Light: From Delacroix to Signac