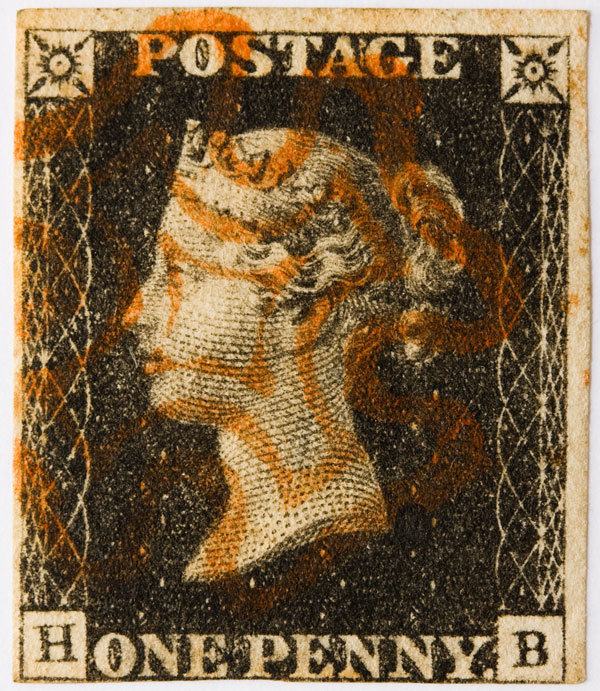 Although around 68 million were produced, the Penny Black is one of the most famous and sought-after postage stamps for avid collectors. It is so famous, in fact, that Stanley Gibbons—a company specialising in the retailing of collectable postage stamps established in 1865—has a few on sale for anywhere between £300 and £300,000, depending on their condition.

Considered the world’s first adhesive postage stamp to be used in the public postal system, the Penny Black was issued in May 1840—it features a profile of Queen Victoria, making it all the more valuable to historians and collectors of relics from the Victorian era. Its design was inspired by the City Medal, a coin designed to commemorate the Queen’s visit to the Guildhall in November 1837.

The stamp, which is black and white in colour and 20 x 24 mm in size, caused a true revolution in the postage industry; it increased postal traffic dramatically from 75 million to 410 million in under a decade. In addition to being the first evidence of postage pre-payment, the Penny Black also rendered sending mail affordable and encouraged many to read and write. Prior to its release, it was normal for mail recipients to pay postage on delivery and be charged by the sheet and distance travelled.

Despite its fame, the original stamp was a failure which remained in circulation for less than a year. The Penny Black’s colour and design made it difficult for a red ‘cancellation’ to be visible. The red ink was also easy to remove, leading many to recycle used stamps. A year after the its release, the Treasury switched to the Penny Red to avoid forgery and began using black ‘cancellations’ instead.

Even though over 68 million of these stamps were printed, the Penny Black is still a very rare collectable to come across. This is because the vast majority were thrown away at the time—stamp collecting as a hobby and passion did not yet exist.

Over the years, the iconic stamp has become somewhat of a Holy Grail for stamp collectors and philatelists. This is due to a number of reasons including printing plate numbers, margin condition, corner letters—which range from AA to TL—and errors.

Discerning collectors on the lookout for an outstanding Penny Black will want to own examples with four clear margins. These are relatively rare as the stamps were printed in unperforated sheets, making versions with badly-cut margins all the more common and worth very little.

Another trait to look out for is the plate number: the Penny Black was famously printed from 11 plates. The 11th plate was originally intended for the printing of the new red stamps, but around 16,000 were printed in black. These are among the rarest and most sought-after examples in circulation.

Other ‘varieties’ such as re-entries, retouches, marks and flaws caused by printing plates, guide lines and double corner letters are all sources of interest for collectors. These traits all have the power to dramatically increase—or decrease—the stamp’s monetary worth.

In modern popular culture, the Penny Black is widely known as a British icon. In 2015, its design featured in the innovations section of the new British passport. The same year saw Google celebrate its 175th anniversary with a dedicated doodle on its homepage.