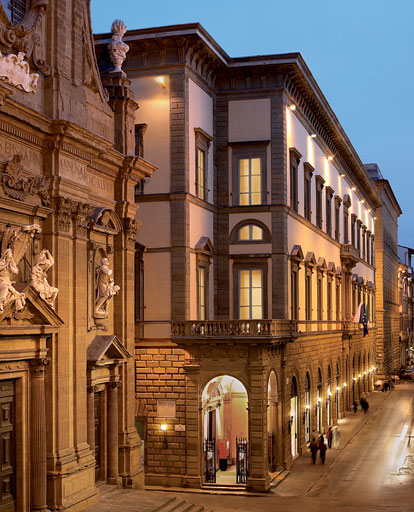 Discover with Arts & Collections the rich history of the Palazzo Tornabuoni, one of the most important Renaissance buildings in Florence.

Palazzo Tornabuoni, whose origins date back to the 15th century, remains one of the most important privately owned Renaissance buildings in Florence. Its location, on the corner of Via Tornabuoni and Via Strozzi, places the Palazzo in the historical centre of the Tuscan capital and at the heart of Florence’s contemporary life. Entering the Palazzo, the huntress Diana welcomes you. From its Renaissance origins, through to the successive generations of illustrious Florentines that have lived here, frescoes, sculptures and architectural details tell magnificent stories of love, joy and courage.

Jacopo Corsi, owner of Palazzo Tornabuoni after Alessandro Medici, was a great music lover and in the habit of holding gatherings in the Palazzo Tornabuoni. The Palazzo hosted a selection of the greatest poets and musicians of that time—Claudio Monteverdi, Torquato Tasso, Ottavio Rinuccini, Jacopo Peri and Giovanbattista Marino, who called themselves the ‘Academy of Music’. In fact, it was in the now privately owned residence’s ‘Sala delle Muse’, that the opera Dafne was first staged in 1594 to the music of Peri and the lyrics of Rinuccini. This was the first melodramatic performance in the world and it was later held in a more systematic manner in the famous ‘Sala Bianca’ of Palazzo Pitti.

This musical entertainment commissioned by Corsi would put Palazzo Tornabuoni in the history books—although the elite circle of humanists who gathered to hear Jacopo Peri’s Dafne one evening in 1598 were probably unaware of its significance, scholars now consider this to be the birthplace of the opera.

One of the most precious objects in the ‘Sala delle Muse’ is the marble mantelpiece decorated with micro mosaic panels by Giacomo Raffaelli. These pint-sized masterpieces depict various animals and are crafted in a technique developed by Raffaelli. Long rods of molten, coloured glass were snipped into tiny, jewel coloured pieces called tesserae, which were used to create the images. Raffaelli’s work was held in high regard during his lifetime; he had workshops in Rome, Florence and Milan. His work is sought-after by collectors, and is featured in museums throughout the world, including the Hermitage in St. Petersburg and Villa Giulia in Rome. Raffaelli lived during the period of the Grand Tour in Rome and was the last of a famous family of glassmakers. He dedicated his life mostly to micro mosaics but he became a polyvalent and curious artist inventing new techniques and restoring historic mosaics.

Over the centuries, each generation embellished the palace with magnificent frescoes and statues, creating the glorious edifice that private Club members enjoy today. Some of the most splendid works of art date from the late 16th century, when the Palazzo became the property of Alessandro de’ Medici, the future Pope Leo XI. As Archbishop of Florence, Alessandro transformed the Palazzo into his seat of power, commissioning leading artists of the day to decorate its grand halls.

In 1736 Marquis Antonio Corsi acquired Palazzo Tornabuoni. During the following century and a half, his family continued to embellish and improve the building, unifying its diverse architectural styles as well as commissioning new decorative elements. Many of the hand-carved marble mantelpieces and delicate stucco work framing the frescoes date back to this time. A meticulous four-year restoration has returned the Palace to the splendor of its Renaissance origins. In addition to this, the building’s infrastructure has been updated to the most hi-tech—yet unobtrusive—levels of comfort, style and convenience.

Palazzo Tornabuoni offers a rare opportunity to live in and amongst the history, architecture and culture of Reniassance Florence while enjoying the finest comforts and amenities.

The Palazzo was a favorite meeting point for many of the great poets and musicians who made Florence such a vibrant cultural hub, including Monteverdi, Tasso, Rinuccini and Galileo Galilei’s father. Reviving its 16th century role as a civic fulcrum, Palazzo Tornabuoni Club is once again an integral part of the city’s vibrant cultural life, and a dynamic forum for intellectual, social and business encounters.

At Palazzo Tornabuoni beauty is seamlessly interwoven in 38 elegant residences that are both historic and contemporary. Members of Palazzo Tornabuoni enjoy a unique lifestyle born from centuries of Florentine culture and the city’s deep-rooted talent for turning life into art. The Palazzo Tornabuoni is managed by the Four Seasons Hotels and Resorts. Visit them online to find out more.

Discovering the Age of Charles Darwin