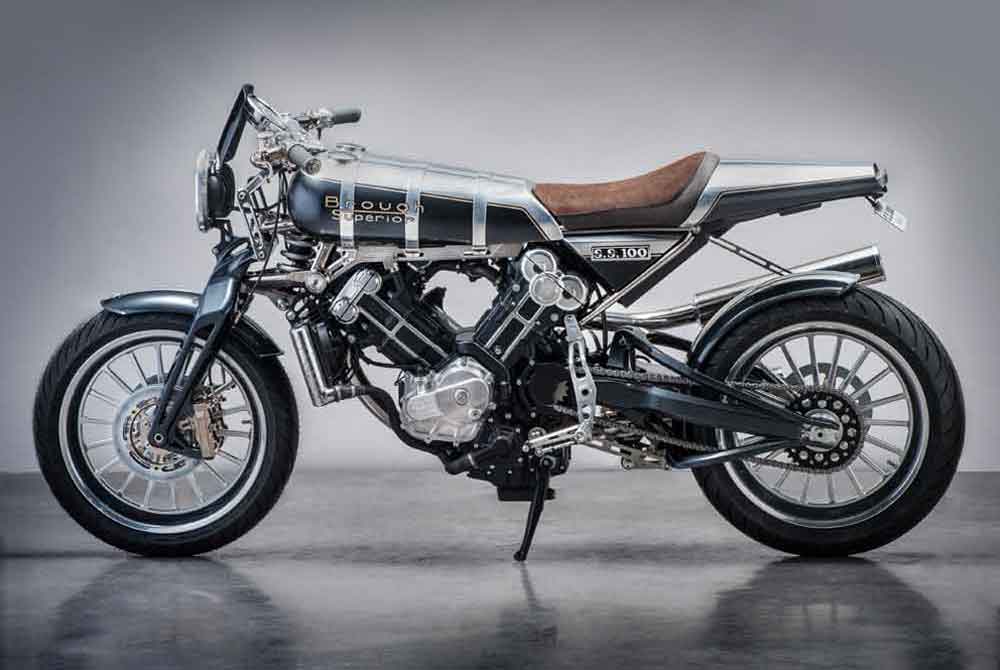 The Brough Superior SS100 is back on the road.

Venerable British brand Brough Superior, first established in 1919, produced powerful, stylish motorcycles that were widely acclaimed, owned by everyone from T. E. Lawrence (he purchased seven of them in a row) to George Bernard Shaw and Jay Leno. The most well-known model in Brough Superior’s stable was the muscular SS100, which formed a core part of the brand.

The numbers of Brough Superior bikes referred to their warranted top speed, and each SS100 from 1925 onwards came with a written guarantee that it had been timed at 100mph or more over the flying quarter mile. It was this speed that made the SS100 so alluring to mileage addicts such as T. E. Lawrence, who would often leave Brough’s works in Nottingham on a Friday night with an SS100 and return on Monday morning with the tires worn down to the canvas and another 1,000 miles on the clock.

An exercise in functional elegance, the Brough Superior SS100 excelled in every type of competition, from races, sprints, hill climbs and trials to tarmac, sand, shale and even ice.

It was, however, a short-lived success. From the launch of the brand in 1919 the brand produced some 3,000 motorcycles before ceasing production in 1940. It lay dormant for 68 years until 2008, when classic motorcycle enthusiast Mark Upham bought the rights to the brand name. In 2013 he met fellow Brough Superior fan Thierry Henriette, a motorcycle designer and constructor. A new company was formed, with plans to produce a new generation SS100 revealed that same year.

The company has now begun production of the new SS100 in earnest. Each machine will be custom built and made to order, with a choice of three finishes. Evoking the style of its Jazz Age forebear as well as being constructed out of the latest cutting edge components, it’s a supremely beautiful motorcycle that makes no compromises when it comes to quality and design. •